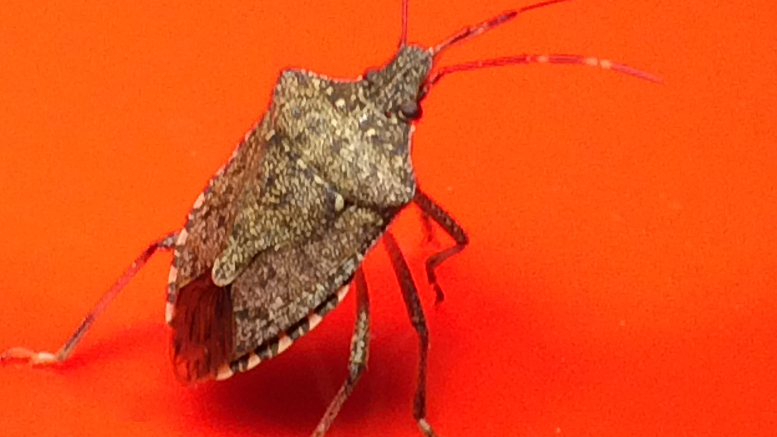 Please forgive my riff on the old TV commercial touting, “Orange juice. It’s not just for breakfast anymore.” But some recent Facebook traffic leads me to believe that stinkbugs are now as ubiquitous as America’s favorite fruit drink.

This came as a shock to me.

See, there was a time when we had so many stinkbugs around here, I figured my neighborhood was the Western Hemisphere’s center of stinkbug reproduction. In fact, it seemed possible my very own living room was a virtual No-Tell Motel of illicit stinkbug lovemaking. This was based on the fact that guilty-looking stinkbugs were always schlepping up and down my walls, presumably headed home after nights of sin and debauchery.

Now I simply believe stinkbugs are taking over the world.

After all, they have been thriving for zillions of years. In their own way, they are as prehistoric looking as crocodiles, with their spindly little legs, waving antennae and hard outer shells shaped like shields or a family crest. Thus equipped, some would argue, stinkbugs are evolution’s darlings.

But the more I encounter them, the more I attribute their species’ success to a really good public relations guy.

This was the same guy who named them stinkbugs.

“Stinkbugs!” they probably protested at first. “We don’t wanna be called stinkbugs! Why not call us something appealing, like baconbugs?”

This worked far better than even the stinkbugs themselves could have imagined. For example, in all my years I have never squished a stinkbug. Maybe they do smell like bacon. But years of stinkbug public relations have programmed me to believe squishing one will leave me sprawled on the bathroom floor, bowing to the porcelain god and swearing I will never squish another.

That stink threat is a powerful survival tool, which also explains why stinkbugs are so stinking cocky.

As I type this, I am staring at a stinkbug just a foot away, insolently perched on the red plastic cap of my Beaumont Instant Classic Roast Coffee jar.

But what if our positions were reversed? What if I were a tiny human perched on that plastic coffee jar’s cap, and he were a short-tempered, 200-pound stinkbug straining his brain to write another column for the Muncie Journal?

Would I be afraid he’d squish me?

But this stinkbug has been sitting there, unblinking, staring at me for the better part of an hour now. What’s more, a couple minutes ago, just to break the ice, I muttered, “Yo. What’s up?”

Seconds later, in a insolent little stinkbug voice, I swear he answered, “Are you talkin’ to me?”

Apparently some sort of tough guy, he’s not even worried about me squishing him! Besides the stink threat, this might mean word has gotten around that I became a non-squishing bug pacifist last summer. If I spot a stinkbug crawling on me, the worst I’ll do is launch it across the room with my finger.

However, this is the same finger that, back in my smoking days, could flick a cigarette butt 15 feet. My pacifistic bug beliefs notwithstanding, using this method while seated on our couch, I have personally launched a stinkbug from my pant leg and watched it ricochet off the bricks of our fireplace.

But two minutes later, that very same stinkbug was gamely pulling himself up my pant leg again, with nothing to show for it but a slight limp.

Why don’t they die?

Watching, I could only shake my head and think, “What’s with these guys?” Meanwhile, I envision a future, millennia from now, with little tiny stinkbug golf courses, tiny McDonalds with narrow stinkbug drive-thru lanes and liquor stores where the whiskey comes in bottles smaller than thimbles.