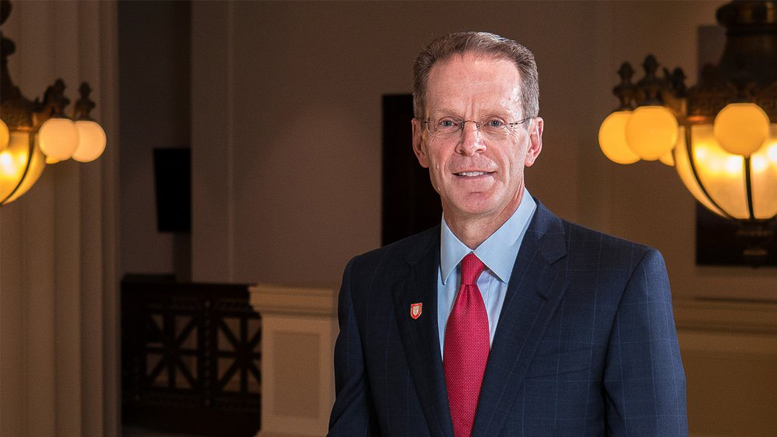 MUNCIE, Ind. — The Ball State University Board of Trustees today announced that Geoffrey S. Mearns will begin serving as president on Monday, May 15.

“This is an exciting time at Ball State University, and we are eager to have Geoff join us,” said Board Chair Rick Hall. “Preparing for our centennial, guiding us to a new strategic plan, building on our enrollment successes — there’s much to celebrate, and every member of the Ball State community is looking forward to collaborating with Geoff as we take the university to the next level.”

Hall added that Mearns will begin relationship building with key internal and external stakeholders. He’ll also start to gain an understanding of the rich history of the university, as well as the opportunities and challenges that exist. As president, Mearns will also increase and steward Ball State’s resources, and strengthen partnerships with key constituencies.

Before the search for a new president began, university leadership and the Board of Trustees committed to providing the new president with onboarding tools designed to help accelerate the onboarding process. Mearns will have a Presidential Transition Committee, appointed by Interim President Terry King, and an executive advising firm, Franke Associates, to assist with the transition.

“Those resources will provide me with different and diverse perspectives that will help me make strategic, informed decisions for the long-term health and well-being of Ball State University,” Mearns said. “I’m thankful to university leadership for providing these tools and excited to get to campus to begin working with the faculty and staff, students, alumni, donors and friends. Together, we will build a bright future for Ball State.”

Mearns comes to Ball State after spending more than four years as the president of Northern Kentucky University. There, he led an advocacy campaign to garner additional state support for the university, in an effort to address a historic funding disparity. The multiyear educational efforts resulted in an additional $5.1 million in funding for the university.

Before accepting the role at Northern Kentucky, Mearns served for two years as provost at Cleveland State University, leading CSU’s successful reaccreditation efforts and spearheading a concerted and comprehensive campuswide initiative to improve undergraduate retention and graduation rates. Additionally, heserved four and a half years as dean and professor of law at Cleveland-Marshall College of Law at CSU before being named provost.

He earned his JD from the University of Virginia and was named to the law school’s Order of Coif, reserved for those students of exemplary academic achievement. He earned his undergraduate degree in English from Yale University.

“It’s an honor to have been selected to be the 17th president of this university,” Mearns said. “I’m eager to get to campus and get to work.”

Interim President Terry King will remain in his role until Mearns’ arrival.