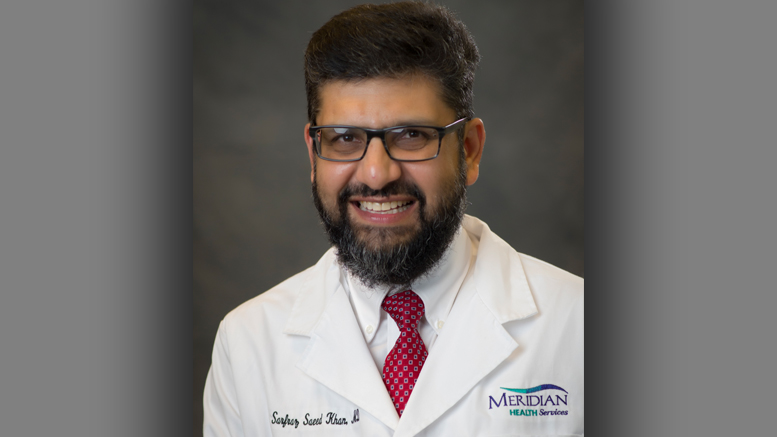 MUNCIE, Ind.— Meridian Health Services would like to recognize Dr. Sarfraz Khan for receiving  a distinguished national award honoring his significant contributions to the psychiatric profession.

“Dr. Khan has been instrumental in Meridian’s medical integration efforts of primary medical care and behavioral health, which enable a higher level of patient care focusing on the whole person,” Meridian President/CEO Hank Milius said. “He is fully deserving of this award, as it commemorates those accomplishments.”

Requirements for being nominated as a Distinguished Fellow include having eight or more consecutive years as a general member or Fellow of the APA; certification by the American Board of Psychiatry and Neurology, the Royal College of Physicians and Surgeons of Canada, the American Osteopathic Association or equivalent certifying board; and three letters of recommendation from current Distinguished Fellows or Distinguished Life Fellows. Local district branches and state associations submit the nominations.

Along with the APA award, Dr. Khan also was unanimously voted as deserving of promotion to Volunteer Clinical Associate Professor of Psychiatry at the Indiana University School of Medicine’s Muncie location (IUSM-Muncie). The IU School of Medicine Lecturers, as well as the Clinical Rank Faculty Promotion Committee, formed the decision.

Dr. Khan currently is Chief Medical Officer, Vice President of Medical Services and Medical Director for Psychiatry at Meridian Health Services. He also is the site director for the Psychiatry Clerkship for third-year medical students at IUSM-Muncie. Dr. Khan completed medical education at Pakistan’s Rawalpindi Medical College in 1990 and has been chairman of the IU Health Ball Memorial Hospital Department of Psychiatry since August 2010.