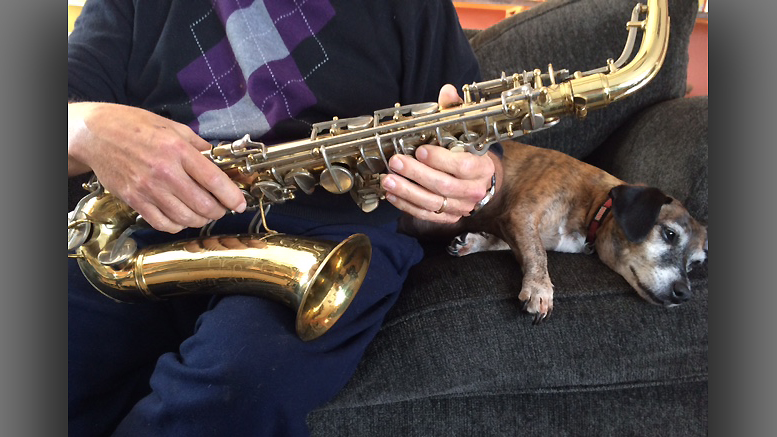 Even dogs got excited when they saw my saxophone. Photo by: Nancy Carlson

Every now and again, I think about digging out my old saxophone and giving it a toot.

I had taken ten lessons on a rented horn before Dad bought my sax for $500 back in the early 1960s, when a brand new Chevy cost you about $2,000. Why he spent that kind of money on an instrument I didn’t want, I’ll never know. Even back then, just before the British Invasion hit the rock music charts, I had made it clear my first choice was a guitar, and my second choice, the drums.

Of course, had Dad been cooler musically, not to mention prescient, he might have talked me into liking it.

“Some year, son,” he could have predicted, “a beautiful cat called Clarence Clemons will play sax in a fella named Bruce Springsteen’s E Street Band! Plus, Bobby Keys will blow the hot sax licks on a tune called ‘Brown Sugar’ by The Rolling Stones, whatever they are. And we can’t forget John Helliwell, who’ll do the same for something called a Supertramp! Those saxophonists will be truly groovy, whatever groovy means!”

For awhile, Sigurd was a fixation with Dad. At a time when I thought the height of musical greatness was Jan and Dean’s “Little Old Lady From Pasadena,” he’d return from forays into record stores bearing Sigurd’s classical albums. In his eyes burned the hope that I would become as enthralled with them as I was with “Chugalug,” Roger Miller’s ode to adolescent inebriation.

It didn’t happen, though.

Not that it was Sigurd’s fault. He was a marvelous saxophonist who spent his career trying to insinuate his instrument into symphony orchestras. I’ve seen videos of him performing, and he was fabulous.

Trouble was, unlike Elvis, in his videos Sigurd never had to bat away the underpants being thrown at him on stage by hysterical girls.

If Sigurd’s lack of airborne bloomers bothered me – and it did – it didn’t bother Dad. He probably figured that boded well for his son’s success as a church performer. As soon as I learned to play about six notes, he was marching me in front of the congregation to perform the hymn “Faith of Our Fathers.”

With six notes in your repertoire, or maybe seven, tops, a kid could play a stumbling, squeaky rendition of that somber hymn. I know, because I did it, on any number of Sundays. What’s more, nobody ever questioned why I didn’t occasionally play something else, maybe because Dad was a big-wig in our church, the chairman of its Board of Deacons.

Even so, standing there glancing out over my sheet music at the packed sanctuary, I could tell my quarterly performances were having a profound spiritual impact by the way folks stared heavenward, contemplating their eventual admittance through the Pearly Gates.

It wasn’t until later I realized their eyes had actually rolled up into their heads, while they begged, “Please, God,  take me now or get me the heck outa here!” as they contemplated rushing through the church’s exits.

By a long shot, I was no Sigurd Rascher. Ditto for Clarence Clemons.

It took five years before I managed to put my sax away, but Dad finally accepted that he was never going to hear me play “Faith of Our Fathers” inside a stadium packed with joyful, awestruck worshippers attending a Billy Graham rally.

On the other hand, he probably took comfort in the fact he was never going to hear me in some stadium, being pelted with panties while I played the hot sax licks to “Brown Sugar,” either.