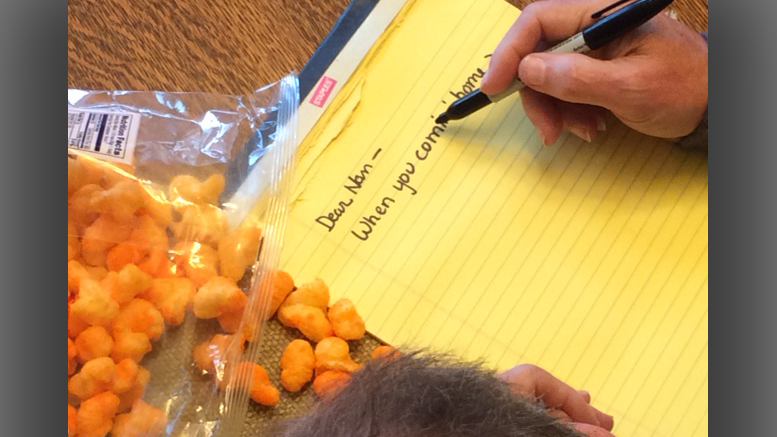 My wife Nan occasionally goes on church mission trips, or vacations with her sisters. But before she left this last time, she warned me against writing a bunch of blatant falsehoods about how emotionally devastating her absences always are to me, like I did during her previous  trip.

“At least try not to lie!” she insisted.

Granted, last time I may have gone a little overboard on the heartrending effects of desertion, the old abandoned-husband shtick.

I think I mentioned sitting around for hours every night, running my liver through a bourbon-flavored obstacle course, all the while moaning and groaning along to singer George Jones’ immortal little marriage ditty, “If Drinkn’ Don’t Kill Me, Her Memory Will.”

Also, I may have noted that for seven days, I didn’t eat anything but Moon Pies and Cheez Puffs.

Come to think of it, I may have even inadvertently mentioned that at my lowest point, I was considering throwing myself off the roof.

Well, pretty soon, scores of Nan’s worrywart friends were texting her in a panic, telling her she’d better get home fast because it sounded like I was about to bite the proverbial Big One. Naturally, Nan was frantic with worry.

I know, because she called to check up on me just five days later.

This was even though she realizes I find George’s death-and-drinkin’ songs very up-lifting. What’s more, Moon Pies and Cheez Puffs are two of my favorite sources of sustenance, combining both the wholesome goodness of marshmallows and my minimum daily requirement of neon orange cheese dust.

As for jumping off the roof? Hey, she knows darned well we live in a one-story ranch house. At the most, I’d break both legs and my pelvis.

But still, to appease Nan on this trip, I want to assure her that things are different this time, and I haven’t missed her one little bit.

For example, now I am spending my nights knocking back straight shots of chocolate milk while warbling along to happier music, such as that found on recordings like “The Monkees’ Greatest Hits.”

My liver is happy as a kid in a Bounce House.

Stewing over mournful musical numbers about death, depression and mortality? Nah. It’s hard to get too morbid while you’re sitting around singing “Tapioca Tundra.”

What’s more, I want you to know that, far from moping around the house in my pajamas all day, I ditched them yesterday by 4 p.m. Even more impressive, two hours later I actually pulled on some pants.

Also darling, please rest assured that this time, I am letting the dogs out every hour on the hour. I know now I was wrong to think taping a dog biscuit to the toilet handle would teach them to flush on their own.

Plus, I have been keeping the house perfectly picked up. Seriously, it looks lots better than when you are here! And if anybody from our bank tries to tell you I bounced a check to Cindy’s Cleaning Service, they’re lying through their teeth.

Finally, I want you to know that through cold and snow, rain and tornadoes, I’ve been faithfully keeping all your many, many bird feeders filled to the brim, just as I promised you I would. This, even at a cost to me of considerable inconvenience and personal discomfort.

Furthermore,  if upon your return, you are besieged by ragged flocks of skinny, pissed-off birds, it’s only because they missed you so very, very much.

Unlike me, of course. I’m getting along just hunky-dory without you.