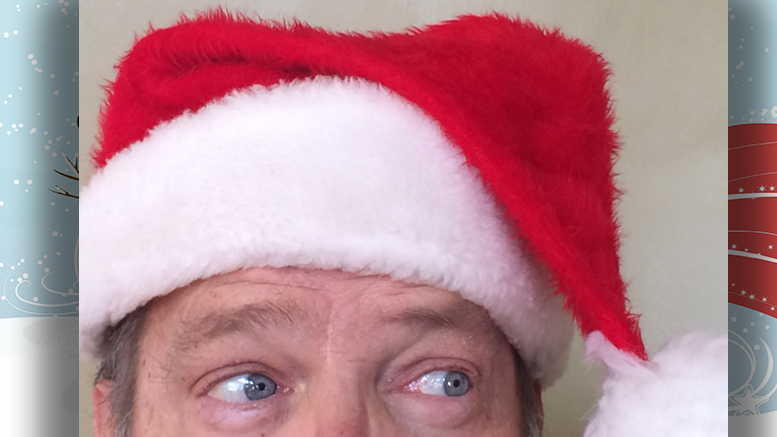 Being Santa isn’t a job to be taken lightly. Photo by: Nancy Carlson

Frankly, I’m usually not too enthusiastic a Christmas celebrant, though occasionally I do miss being Santa Claus.

What? Me? Santa Claus?

Oh yeah, baby, I was the Big Guy once, way back when my previous employer drafted me to be Jolly Old St. Nick for the company Christmas party.

Now, I’d like to think they picked me for my overriding holiday spirit of love and compassion, but it probably had more to do with my pear-shaped physique. Getting dressed, I recall being all depressed and thinking, “You know you’re way too fat when you put on a Santa suit and it fits like a glove.”

Turning myself into Santa still involved a fair bit of effort, though. There were the bright red pants and jacket to put on. Cinching up the shiny black belt. Pulling on each shiny black boot. Tugging on the long white wig before donning the crimson, white-fringed, floppy hat. Finally, there was putting on the bushy white beard.

That’s the part that really got to me.

See, the company hadn’t procured this Santa outfit from some reputable costume rental shop with its own dry-cleaning facility out back. Rather, somebody at work had borrowed it from somebody who knew somebody.

What’s more, the beard was hotter than heck.

In no time, I was frothing at the mouth inside it. Not that my own froth bothered me much. My own froth, I knew, was pristine. But what about the other guy’s froth? Lord only knew what it was crawling with! And how many other Santas had the owner loaned this beard to over the years? What about their froth? And who was to say that, in the middle of a frothy work shift while doing some Santa Clausing, one of those guys hadn’t taken a quick lunch break and eaten an egg salad sandwich?

Were those dried egg-salad smears I felt, making my lips itch inside the beard’s mouth hole?

Yes, I believed they were!

In a panic, I was just about to rip the beard from my face when the word came through: “Get out there, Santa! You’re on!”

Gulping back my disgust, I fearfully entered the party room, the full weight of my task filling me with trepidation. The room had been nicely decorated, with your standard yule trees and stockings and such, and a folding table holding a huge bowl of red punch and assortment of fancy Christmas cookies. If the room was ready, though, I was not. I was no Santa Claus, for crying out loud! I was a shy guy, an introvert, practically a hermit! But blindly waving my way past a hundred seated employees, stumbling toward a stage up front where scores of wrapped gifts were piled around a chair, I could hardly believe my eyes when they finally focused.

My fellow employees were cheering me!

Well, not me, per se. They were cheering Santa Claus. But in a very odd way – even an almost magical way – the line between me and the jolly old elf had suddenly blurred.

And what was this? Just an hour before, those employees had been in a workaday mood, dealing with the failures and triumphs, petty jealousies and selfless acts, despair and hope that fill any workplace. But now, as they sat before me opening their gifts of stadium blankets emblazoned with our company’s logo, I saw laughter, happiness and kindness, all exchanged between people who obviously cared for one another.

As I “Ho–ho–hoed” my head off, some of the women even sat on my lap with smiles and words of thanks, as though they were little girls again. Heck, even a couple guys sat on my lap for a word or two.

Unfortunately, it was all over too quickly.

Later, having changed back into my frumpy newspaperman costume, I returned to the newsroom. Once again, I was just another lowly feature writer, hoping to finish up quickly so I could get back home to Nan and the kids.

But still … something had changed. Me, I guess. I could feel the difference. It was Christmastime, for some folks just a specially joyous holiday among holidays, for others the sacred celebration of a world-changing birth in a manger in Bethlehem.

Either way, I’d been a front-row witness to the power of Christmas love.