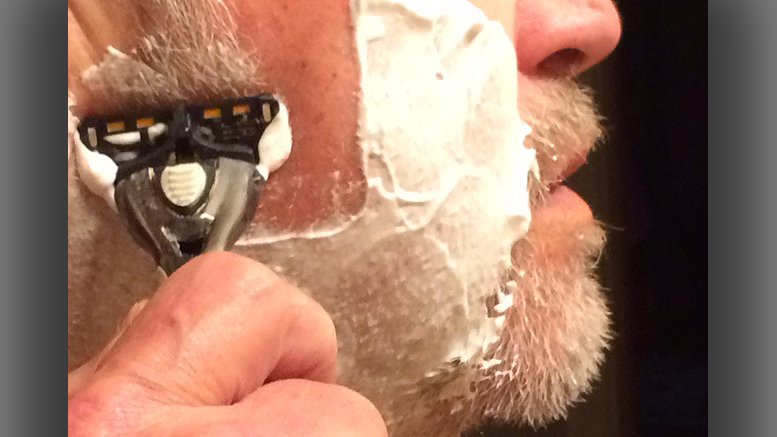 When it comes to shaving, I have always been a blade man.

Beats me why, exactly, but using a blade as opposed to an electric shaver seemed cooler, more “rootsy,” more organic, if you will. The shaves seemed closer, too, come to think of it.

Not even my late father, an electric shaver guy all his life, was immune to the attraction of blades. I remember the surprised look on his face the day he learned his only son preferred blades. Interest flared in his eyes, and something else.

Unfortunately, years of haplessly guiding a miniature electric beard-mower across his cheeks and chin hadn’t prepared him to safely wield a blade. The next morning at breakfast, I about up-chucked my Cheerios. Across the table, Dad looked like he’d stuck his face in a sausage grinder, his rash of nicks covered with little wads of bloody toilet paper.

In truth, he was four times the man I’ll ever be, but one day later he was back using his safe electric shaver.

As for me, I have stuck with blades, and a year or two ago hopped aboard the Dollar Shave Club bandwagon. For what seemed a nominal sum, this new outfit promised to send me a shaver handle, plus a supply of fresh blades every month to attach to the end of it.

Early on, though, I found the whole “club” concept intimidating.

See, growing up I was never one of the popular kids, one of the “in crowd.” So were there guys, I now fretted, who applied to join the Dollar Shave Club but didn’t get in?  What if I were one of them?

Being turned down for membership in the Dollar Shave Club would be a definite bummer.

Plus, my potential membership was interwoven with a weird personal issue regarding my own mortality. See, I’d never been much of a joiner. This seldom bothered me, except I knew when I died, my lack of affiliations would result in a crappy little obituary. But if I got in the club, I figured, that would bulk up my obit by a good line or two.

I could see it now.

“Mr. Carlson enjoyed watching clouds form and eating meatballs,” it would read, “and was a proud member of the Dollar Shave Club.”

Yeah, that was better than nothing.

Anyway, I sweated it out until I got the word in the mail – I was in!

What’s more, this word was accompanied by my shaver’s handle and some blades. There was also a Dollar Shave Club newsletter, meant to foster camaraderie with fellow members by reporting their personal shaving feats which, frankly, weren’t all that interesting.

But the club also offered good deals on special products like Shave Butter, whatever that was. Turned out it was a pricy form of shaving cream. Obviously, this begged the question, did they have anything cheaper, like Shave Margarine?

Then there was the club’s Amber Lavender Body Cleanser. But that scent sounded a trifle too froufrou for me. On the other hand, I had to admit smelling like Amber Lavender would be an improvement over my natural scent, which has been described as more like Salami Budweiser.

For me, though, the blades were the main thing. Early on, averaging a new replacement  blade a week seemed bountiful to the point of wastefulness.

The thing is, all my shaving life I had stretched my blades for as long as possible. I would literally use the same blade for months on end. When it got really dull, there were mornings during my adolescence that the sink drain was clogged with scraped skin and pimples.

Old habits, as they say, die hard. Now, after six months of membership, I had new blades out my proverbial wazoo. Still, I couldn’t speed up my usage of them, and they kept coming and coming.

Finally, guilt drove me to become a Dollar Shave Club dropout. That’s all right, however, because I now have drawers of new blades stashed away, which is a good feeling.