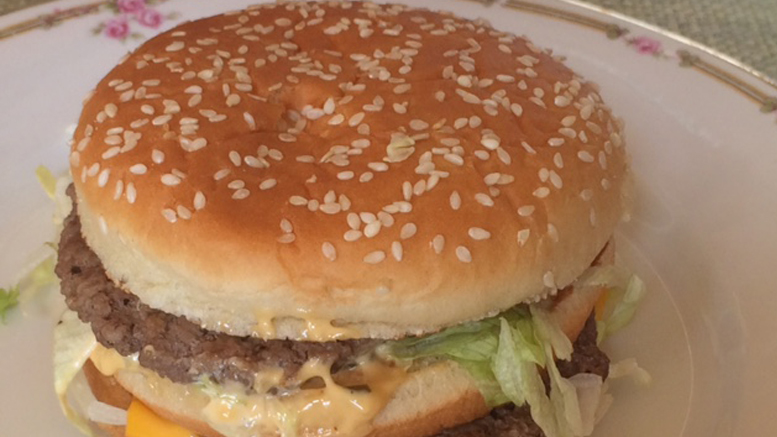 The classic, inviting lines of a McDonald’s Big Mac. Photo by: Nancy Carlson

Disturbing news of this cultural disconnection came via The Wall Street Journal not long ago. When I was a high school kid earning $1.05 an hour working at my hometown McDonald’s, I’d have given anything for a Big Mac, but we had only hamburgers, cheeseburgers and fish sandwiches to choose from.

Life was very bleak back then.

Now, young people are too busy munching their fancy-schmancy McGriddles, McMuffins and Chicken McNuggets to acknowledge the pioneering sacrifices those of us working under the Golden Arches made for them.

Of course, McDonald’s helped us, too.

For example, as a total math moron, I was flunking geometry bigger than heck. As late as half-way through the school year, I believed the Pythagorean Theorem had something to do with pythons. Happily, Mr. Plank, my long-suffering math teacher, saved me from further tormenting him, passing me with a D-minus after making me promise to never darken his doorway again.

But thanks to McDonald’s, that very same year I mastered the art of making correct change, way before modern cash registers did that for you. Just try figuring the change from a fiver for a cheeseburger and orange soda using Euclidean geometry.

McDonald’s taught us something of real-world economics, too, in appreciating the difference between the haves and the have-nots. When word got out that the spinster sisters who owned our franchise had paid $25,000 for it, that staggering sum left us poor burger jockeys babbling uncomprehendingly.

Our parents wouldn’t have shelled out that kind of money to spring us if we’d been kidnapped.

We learned to be inquisitive, too. When one of us young geniuses wondered how resting hidden atop a heating duct for two months would affect the appearance and taste of a fish sandwich, he launched the experiment as kind of an in-store science-fair project.

In the end, how did it look?

Kind of mummified but, all things considered, not half bad!

How did it taste?

Trust me, I have no idea.

When one afternoon my best buddy, Paul, greeted a rush of customers too lackadaisically for our manager’s liking, the boss ordered him to start making milkshakes and not stop until he was told.

Trouble was, the boss forgot to tell him to quit.

Now, anybody else would have slowed down once the rush of customers subsided. But Paul, who didn’t take kindly to criticism, continued making shakes at top speed. An hour later, when the boss finally happened by, there must have been 400 unsold milkshakes cramming the cooler, with more on the way.

Ten minutes later, as we thirsty workers gratefully slurped the first of many surplus milkshakes we’d drink that shift, we watched our now-jobless cohort hop onto his bicycle and pedal into the sunset, his fast-food career a victim of his own spite.

Perhaps my most memorable day on the job, however, entailed a stark lesson in workplace safety.

It was during another customer rush. A young assistant manager was busily flipping burgers to keep up when – the floor beneath him made slick by splattered grease – he slipped.

The good news was, he caught himself as he fell.

The bad news was, he did it by landing his full weight flat-handed on the grill.

I will tell you one of the few things I know for sure in life. If you ever want to test your ability to swear an unbelievable blue streak, just go to McDonald’s, ask if you can borrow the grill for a second, then sprawl on it.

To this day, I’ve never heard anybody cuss quite so eloquently as that assistant manager did then, at least between his girlish, high-pitched screams. If there were such a thing as the Profanity Olympics, that guy would been its Michael Phelps.

Anyway millennials, just be aware there is a wealth of life-enhancing stuff that McDonald’s offers. I know from experience.