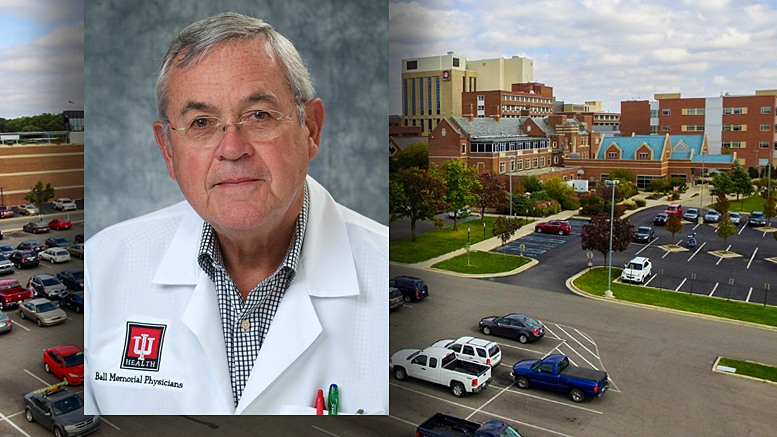 William B. Fisher, MD. Aerial photo of Ball Hospital and the Cancer Center by: Michael Wolfe

Muncie, IN — A medical oncologist in Muncie will be honored Wednesday by an Indianapolis nonprofit organization for more than four decades of service to cancer patients, and for his visionary work to bring cutting-edge treatments to the community.

William B. Fisher, MD, of IU Health Ball Memorial Hospital, will receive the first-ever Lifetime Achievement Award from Hoosier Cancer Research Network (formerly known as Hoosier Oncology Group, or affectionately as “The HOG”), during an event in Indianapolis. Fisher was one of six oncologists who founded the organization in the mid-1980s, and served as its founding vice chair. He has remained a strong supporter of the vision for collaborative research to expand patient access to clinical trials throughout the state of Indiana and beyond.

“Dr. Fisher was and is a pioneer in providing high-quality cancer care and bringing research opportunities to patients in the community setting,” said Hoosier Cancer Research Network Chairman Christopher A. Fausel, PharmD. “He has served his patients and families in the Muncie area with distinction and compassion for more than 40 years.”

“I have known but a few who even come close to possessing the heart and soul of Bill Fisher. He is the consummate physician who places the total care of his patients above all else,” said Patrick J. Loehrer, Sr., MD, director of the Indiana University Melvin and Bren Simon Cancer Center, and founding chairman of Hoosier Cancer Research Network. “Bill is a consummate friend who finds greater joy in others’ accomplishments than in his own and one whose heart aches for those in distress. He has spent a lifetime trying to make a difference, one person at a time. What I suspect he doesn’t appreciate is that he succeeded beyond his wildest imagination.”

“I first met Bill in the mid 1980s and found him to be smart, compassionate, and bounding with energy,” McClean said. “Under his leadership the HOG grew in participants and in the scope of our research. I feel his enthusiasm was one of the main reasons for this growth.”

The son of a Henry County physician, Fisher is a graduate of the University of Pennsylvania School of Medicine, where his interest in oncology was sparked by Peter Nowell, MD, one of the co-discoverers of the Philadelphia chromosome, an abnormality associated with chronic myelogenous leukemia. Fisher completed fellowships in oncology and hematology at University Hospitals in Cleveland, Ohio, and then served for three years in the military at Fort Carson in Colorado, where he practiced hematology/oncology. His desire to establish roots in community practice led him back to Muncie and to IU Health Ball Memorial Hospital in 1976, where he continues to practice today.

Fisher and his wife, Terri, are financial supporters of cancer research through the George and Sarah Jane Fisher Fund. He established the fund in the mid-1990s in memory of his mother, Sarah Jane, and brother, George, both of whom died of cancer within the span of three years. Through the fund, Fisher established two awards, given annually by Hoosier Cancer Research Network to early-career cancer researchers as well as clinical research staff.