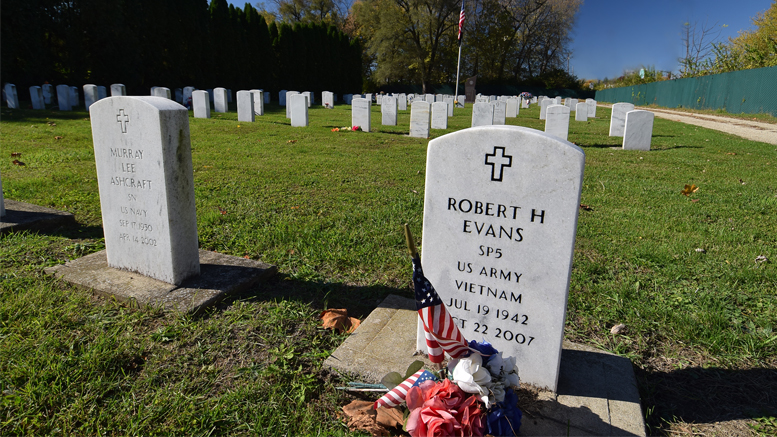 Beech Grove Cemetery is the final resting place for veterans of wars as far back as the Revolutionary War. Photo by: Mike Rhodes

They lie row after row under grave markers in cemeteries like Beech Grove.

Others are scattered among countless small burial grounds across the country, are laid to rest in solemn American cemeteries abroad, or lie by untold thousands at a sacred place called Arlington.

But far less obvious are the living ones, folks we see on our streets, in bars and church pews, at ballgames, grocery stores, schools, factories and in numberless homes. They are the men and women who – of their own accord, or when called upon – donned the uniforms of the Army, Navy, Air Force, Marine Corps and Coast Guard in defense of their country.

Lord knows, they are worthy of honor every day. But this particular one, November 11, Veterans Day, we set aside as a nation to laud them.

When they enlisted, they “signed on the dotted line,” willingly surrendering a significant portion of their lives to our service. Those who were drafted did the same, temporarily subsuming their own ambition for the good of their country.

But they didn’t simply offer their time.

In becoming a soldier, sailor, Marine or airman, they implicitly offered their lives in protection of the rest of us.

Those of us who didn’t serve can’t know the truth of what their service entailed. For some, it presumably passed peacefully, an experience that sent them back into civilian life with a level of maturity they wouldn’t know otherwise.

In my newspaper career, I talked with many veterans who had survived things they wouldn’t wish on anybody. After a while, their stories tended to run together, creating a montage of images.

There’s a young soldier walking through what remains of an Iraqi marketplace, right after a bomb went off, its victims in scattered pieces. There’s a scared young Marine hunkered down in the mud, surrounded by dead comrades and the overwhelming force of North Vietnamese troops intent on annihilating them. There’s the young flight engineer of a B-17 at 30,000 feet, manning his top turret’s machine guns as other mortally wounded American bombers begin their death spirals into the German countryside below. There’s the aged Marine, smiling wanly over a glass of vodka, quietly describing his horrific part in a bloody assault on a Pacific island fortress, and how he escaped with his life, but lost his faith in God there.

There’s all this and plenty more …

Or consider this, a real-life scene. It’s a still summer night, about 10 o’clock, when a walker passes a house, just down the block from his own. It’s a familiar place. The kid that lived there, about 20 years old, was a nice guy, and no stranger. A few years before, he’d passed down his paper route to the walker, whom he tipped a buck – a generous amount of money back then – with every collection.

But going past the kid’s house now, the walker noticed the dark outline of a couple on the front stoop, tightly grasped in each others arms. And as he neared them, along with the sounds of summer bugs and passing traffic, he heard the couple’s quiet sobs.

Even passing at night on the sidewalk suddenly felt like an unforgivable intrusion.

Back home, the walker looked again at the newspaper clipping his parents had laid on a table. There was the kid’s familiar smiling face, pictured above the brief story announcing his death in Vietnam.

That, too, is part of the price, part of the risk, our servicemen and women and those dear to them willingly take.

For a reminder of our veterans’ selfless service, you only need look around some area cemeteries, where the Delaware County Honor Guard presides at literally hundreds of veterans’ burials each year.

Bearing American flags, rifles and resolute faces, Honor Guard members look a tad older than they did in their military days. What hasn’t changed is their dedication to their country, and the belief that their fallen comrades-in-arms are worthy of honor and recognition.

That belief should be something all of us embrace.

If you see a veteran today, folks, thank him or her for their service.