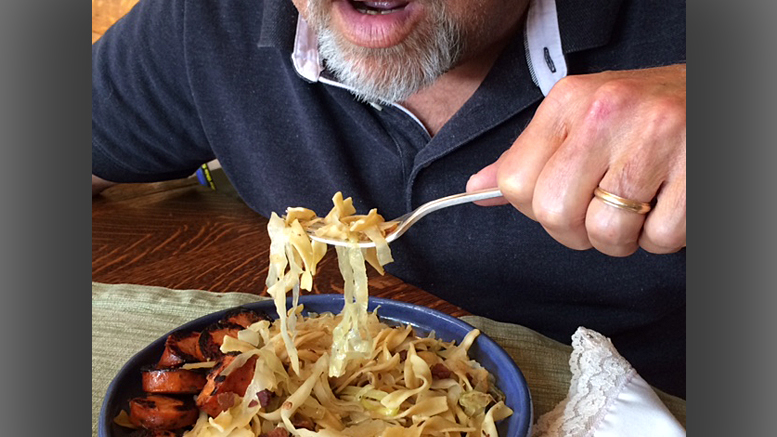 Here’s a demonstration of the crass way to hold a fork. Photo by: Nancy Carlson

Among the many effects of aging I seem to discover almost daily, one is the way arthritis in your hands affects your ability to properly hold cutlery.

Not that long ago, I could easily wield it in a manner that would warm the heart of Miss Manners. And why not? I have been eating for 66 years.

But now? Now I have to hold my spoon with the loutish, inelegant grip exemplified by that scene in the Mel Brooks movie “Blazing Saddles,” where the cowpokes sit around a campfire, eating beans and making uncouth noises.

This is fine at home – minus the noises, pretty much – where I feel it’s sort of my privilege to channel my inner slob.

But only “sort of” because this never fails to draw the disapproval of my wife, Nan being a woman who grew up adhering to classic table manners as promulgated by Emily Post and the leaders of her 4-H club.

Still, some days it just feels good to propel a wrongly-clasped spoonful of potato salad into my gaping maw, the way Daniel Boone or Davy Crockett did it in their day with spoonfuls of possum salad, potato salad being in short supply on the frontier.

While I can sometimes get away with this at home, dining out is another story. Sure, I could grasp my fork in a primal, caveman-like grip at Vera Mae’s Bistro, but it would look crass, so I don’t. Consequently, using my weakened proper grip, my last time there I dropped the fork twice. Both times our kindly waitress rushed me over another one, but I was mortified at my own clumsiness.

In part, this was because it reminded me of a story I read once about a famous American statesman – let’s call him Henry Kissinger. At a banquet, he repeatedly dropped a utensil, forcing a lowly waiter (who had somehow offended the Secretary of State) to keep replacing it, just to emphasize who was Henry Kissinger and who wasn’t.

What a jerk, I remember thinking.

Had I dropped my fork a third time, I figured my waitress would’ve been justified in sticking my replacement someplace my arthritis hadn’t hit yet.

On the bright side, of course, thank God most Americans aren’t expected to use chopsticks. If I have trouble with knives, forks and spoons, I hate to think how soon I’d starve to death if relegated to chopsticks, which require a finesse I could never acquire. At best, I’d end up using them like daggers, hacking at my General Tso’s chicken chunks like they were Janet Leigh and I was that weirdo in the shower scene from “Psycho.”

I’d also probably stab myself in the face.

Glasses, the kind you drink from, are another hassle with arthritic hands.

This is especially true of big glasses, like those 32-ounce beer mugs you get at Mexican restaurants such as Puerto Vallarta and Casa del Sol. Filled with delicious south-of-the-border brew, they are hefty vessels, ones which I now must grip with two hands.

Even as I’m doing so, though, this strikes me as odd.

I mean, you watch a toddler using both hands to hold a sippy cup and it looks cute. But watch that same kid’s grandfather use both hands to slurp Mexican beer from what is essentially a 32-ounce sippy cup and you think, what’s that guy gonna do next? Roll on his back, kick off his shoes and suck his toes?

Now I’m that guy. But if I don’t use both hands, I’ll end up soaking my pants.

Nevertheless, I remain mindful there are far worse afflictions than this. Besides, the wonkier my hands get, the more I appreciate the joys of simple sandwiches, which I can still eat like a pro, and do.