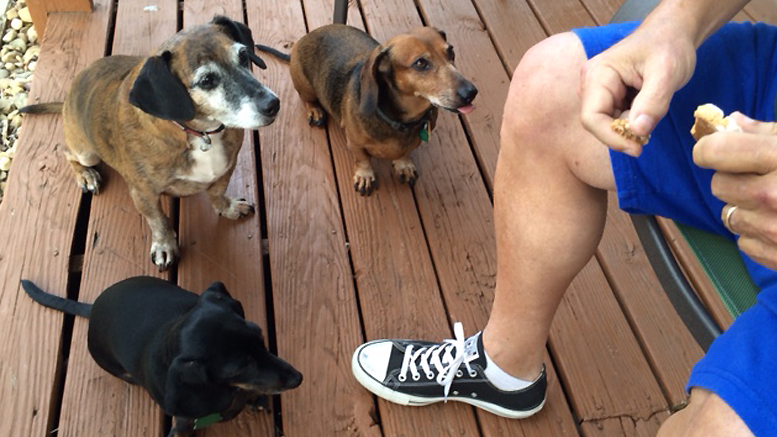 Our ‘robins’ await their morning feeding. Photo by: Nancy Carlson

It’s my morning ritual, one Nan calls “feeding the robins.”

These are hairy, foul-breathed, four-legged robins, however, with glide ratios any competent aeronautical engineer would measure at about 1:1, meaning they would soar through the sky like anvils.

They are, in fact, dogs.

In feeding these “robins,” I first grab a handful of cookies and a cup of coffee and, depending on the weather, carry them out to the back deck or to my recliner. Then I slightly dip each cookie into my coffee and take a nibble of it myself. Then I divvy the rest of each cookie into three parts, and feed them to Dandelion, Toby and Jersey.

Throughout this process, the dogs sit worshipfully at my feet, gawking up at me as if I were some god.

There is a reason for this, and no, it is not that I have a godly presence about me. When it comes to godly presences, I have it on reliable authority that mine is more like, say, Beelzebub’s, the Lord of Darkness.

The thing is, though, all three of our dogs are from ARF, my friend Terri Panszi’s Animal Rescue Fund, a place that is near and dear to my heart. When it comes to “feeding the robins,” their sad histories are particularly fortuitous.

ARF dogs, in truth, are very lucky dogs, but they don’t start out that way. Many, if not most, have been through traumatic times, from outright abuse to being given up by owners who no longer want them. Faced with this, it’s not surprising some come to expect the worst at the unfathomable hands of humans.

If it’s tough for the poor pooches, in an ironic way it’s good for a lowly pensioner such as me, who’s trying to feed them cookies while eking out a few meager bucks to sate his own cravings for medium-rare steaks and great Kentucky bourbon.

See, I know there are exquisite mutts out there with their own 401k accounts, diamond-studded collars and classy names like Reginald Bliss the Third, Esq. These dogs are pandered to by wealthy owners who think nothing of feeding them triangles of toast topped with caviar for breakfast, before the chauffeur hauls their uppity butts to the groomer’s for ugly haircuts.

But our dogs – given their lowly origins – get goofy, joyous, covetous looks on their faces when fed generic oatmeal cookies costing a couple bucks for 50. If I actually popped for, say, Pecan Sandies or some Oreos, they’d be beside themselves. Dog bakery cookies? They’d flat-out faint.

Still, it’s funny how, once the cookie chunks begin falling, they each react to them.

Jersey, who despite what she experienced remains convinced she is royalty, often ignores her piece of cheap cookie until, giving it a couple halfhearted licks, she finally deigns to gobble it down.

Toby, our kindest dog and one who is never convinced he deserves his cheap cookie, takes a while to truly believe it’s his, then eventually downs it after pondering whether the other two don’t deserve it more.

Dandelion had the hardest life, before being rescued from what was described to us as a distant shelter’s “burn pile.” She gobbles hers down like it’s the world’s last cheap oatmeal cookie. On several occasions, I have nearly lost fingers serving cookies to Dandelion. Maybe they taste better, for her, with a hint of human blood.

If so, I suppose it’s worth it.

With that, we’re done again until another morning of cookies for them and worshipful looks for me, The Great God of Cheap Cookies.You know, at this point, it’s possible I enjoy “feeding the robins” even more than they do.

John talks about this article on WLBC with Steve Lindell. Click below.