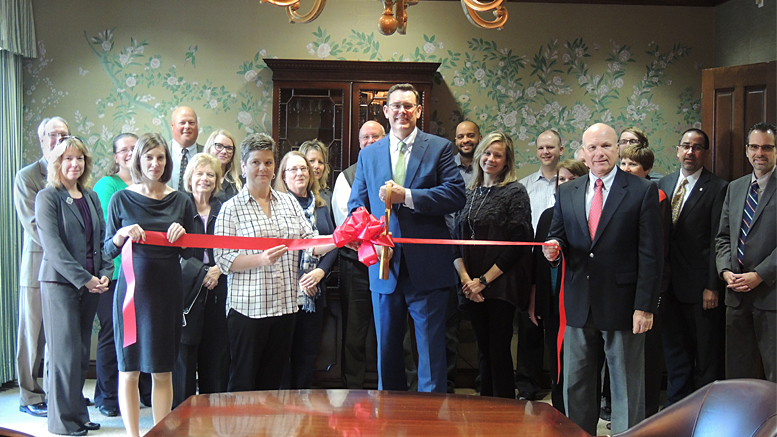 MUNCIE— With its centennial anniversary just a decade away, Ball Brothers Foundation continues to explore innovative ways of accomplishing its historic goals. “Ninety years later, our founders’ priorities are more relevant than ever,” says Jud Fisher, president and chief operating officer of the private Muncie-based philanthropy. “Our mission hasn’t changed, but the way we live it out continues to evolve.”

That mission was established in 1926 when E.B. Ball—Fisher’s great-grandfather—created a trust of more than $3 million, which upon his death became the bedrock of the family foundation. Surviving family members managed the funds and added to them, a tradition that subsequent generations have followed. Assets this year will total approximately $160 million, a number that has enabled the foundation’s current board of directors, including representatives of the founding family, to award nearly 80 grants paying out $7.25 million. “That’s the highest amount of grant dollars given to organizations in our history,” notes Jim Fisher, BBF chairman and chief executive officer.

Guiding principles handed down from the original Ball brothers specify the foundation’s geographic service area and suggest general topics worthy of financial support. Grantmaking is limited to programs and initiatives located in Indiana, with priority given to organizations that benefit the quality of life in Delaware County. Issues of interest and concern include arts and culture, education, the environment, health, human services and general public benefit.

“Our founders dreamed big dreams,” says Jud Fisher. “Today we do the same thing, but we’re carefully measured risk-takers. Most of the grants we make are fairly ‘sure bets’ to well-run nonprofits; others may be riskier but have the potential of major payoffs for the community. Philanthropy often is the only source of flexible and patient capital for nonprofit organizations, and we take that seriously. Our grants come only after careful research and consideration.”

Historically, some of the most ambitious BBF grants have resulted in the most sizable returns on investment. Examples include:

Although Ball Brothers Foundation assets have grown substantially, so have the needs and opportunities within its service area. In its long history the foundation has learned by forging collaborations, connecting grantees with one another, pooling resources and leveraging funds, it can bring about positive change. For that reason, the BBF board and staff have expanded their roles beyond that of grantmaker. As a community catalyst, “The foundation is positioned to convene groups to help tackle important issues and challenges. We often work behind-the-scenes connecting organizations with one another and helping create synergy,” says Jud Fisher. “We view our grantees as the experts. Our role is to provide them with financial support, research, and ongoing encouragement as we partner to make a positive impact on the community.”

BBF recently hosted a 90th anniversary celebration for board members at the E.B. Ball Center, the site of the foundation’s first board meeting in 1926. In reflecting on the significance of the anniversary, Jud Fisher noted, “As one of the nation’s oldest private family foundations, we are honored to carry on the legacies of those who have come before us. We are honored to continue to support organizations and projects that are helping to improve the community where our ancestors lived and worked. Furthermore, we are humbled when we think of our work as helping to pave the way for generations of Ball family members who will come after us and preserve this legacy of stewardship and generosity in our community.”

Click on a thumbnail below to view larger images and descriptions of the pictures below. 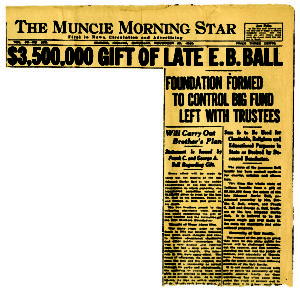 The Muncie Morning Star announced the formation of Ball Brothers Foundation on November 20, 1926. Courtesy of the Minnetrista Heritage Collection. 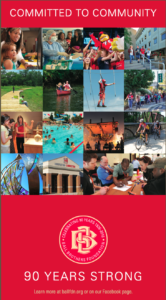 For 90 years, Ball Brothers Foundation has been committed to community. Learn more here about BBF: https://www.ballfdn.org/ 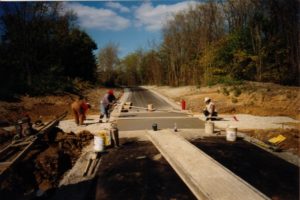 BBF has been a supporter of the Cardinal Greenway since its inception, assisting with trail building, operations, education, trail maintenance and more. BBF support to Cardinal Greenways has totaled over $2 million since 1993. Today, it is Indiana’s longest span of recreational trail. Construction photo courtesy of Cardinal Greenways, Inc. 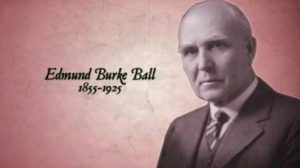 Edmund Burke Ball’s estate gift provided the bedrock of what officially became the Ball Brothers Foundation. Over the years, other Ball family members have contributed to the foundation, helping to grow the foundation’s assets and ability to make grants. Like his brothers, Edmund B. Ball was attuned to the needs of the community and desired to help support the community where he and his family lived, worked, and built their business. 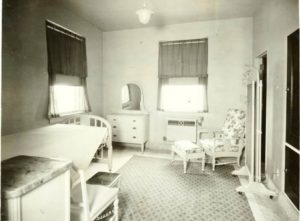 Early support from Ball family members and Ball Brothers Foundation helped Edmund B. Ball’s dream of a state-of-the-art hospital come to life. Today, the hospital is a top employer in the community and, through partnerships with the IU School of Medicine-Muncie and others, provides outstanding physician training programs. Historic photo circa 1929 of the newly constructed hospital courtesy of the Minnetrista Heritage Collection. 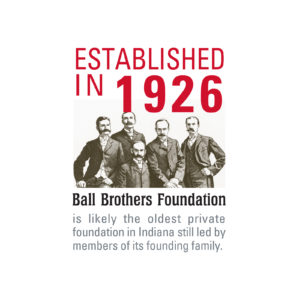 Ball Brothers Foundation remains committed to Muncie, Delaware County, East Central Indiana, and Indiana. It is among the oldest private foundations in the state of Indiana and beyond. Learn more here: www.ballfdn.org 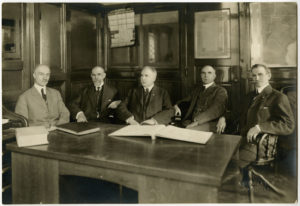 Iconic photo of the five Ball Brothers in their Muncie office. Learn more about one of the private foundations that carries their name: http://www.ballfdn.org/about-bbf/bbf-history/. Photo courtesy of The Minnetrista Heritage Collection. 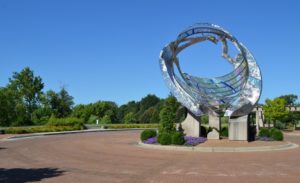 BBF is a major supporter of Minnetrista and helped to bring the vision for this community asset to life in the 1980s. 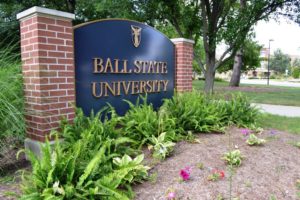 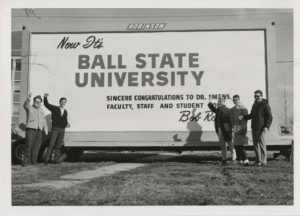