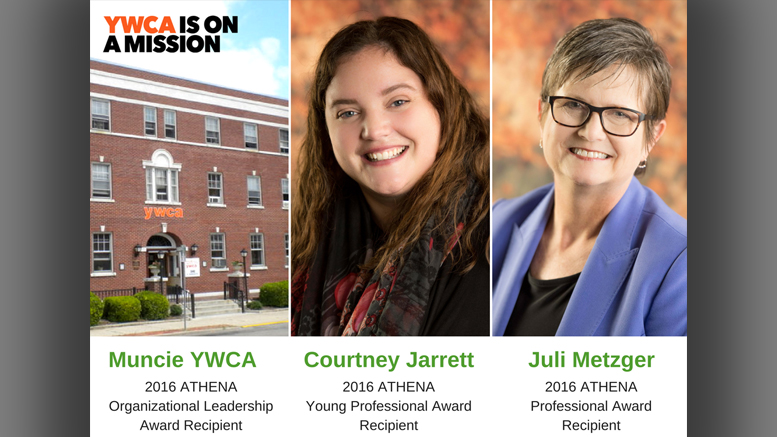 The ATHENA Leadership Awards are a nationally-recognized award which WIBU has been pleased to present for over fifteen years. From a pool of twenty-three nominees, the ATHENA judges had the unenviable task of choosing the 2016 ATHENA Award Recipients.

Metzger has worked more than 25 years in journalism including as former publisher of The Star Press in Muncie and Executive Editor for Digital at the Indianapolis Star. Today, she is a journalism instructor for the Department of Journalism at Ball State University and is Coordinator of Unified. Along with her husband, John, she owns JMG, a niche publishing and social media company. She also is president of the Boys & Girls Club of Muncie and vice president of Project Leadership.

Under Jarrett’s direction, Disability Services was awarded a grant that allows the Ball State Career Center to hire a person designated to helping students with disabilities obtain employment in their field of study. She works with the Women’s and Gender’s Studies program and the feminist student activist group, Feminists for Action to put on community and on-campus events.

“In her role, she impacts over 800 students with disabilities at Ball State University,” wrote Dr. Jarrett’s nominator, Kaitlyn Davis.

The YWCA of Muncie was recognized received the ATHENA Organizational Leadership Award for its work providing housing and life’s necessities to women and children fleeing crisis. Women at the YWCA gain self-sustainable independence and can apply for permanent housing, obtain jobs, learn basic computer skills, or earn a GED or continuing education. The YWCA works to educate, engage, and empower their residents to become the best women they can be.

The WIBU Lifetime Achievement Award honors a woman who has dedicated her life to being a leader and role model. “Her influence has made an enduring and profound difference in her community and the lives of those around her,” said Carolyn Grieves, a Lifetime Achievement Award recipient in 2010. In addition to a framed certificate, WIBU awarded a scholarship in Dollison’s name to a full-time, non-traditional female student enrolled in a local college/university.

Recipients were announced during WIBU’s annual Catalyst for Empowering Women and ATHENA Awards luncheon Nov. 16 at the Horizon Convention Center.

The ATHENA Leadership Award is a national honor presented annually. Winners actively assist women in realizing their full potential, contribute time and energy to the quality of life for others and demonstrate initiative and quality in their profession.

Award recipients were announced by the previous year’s winners and besides the ATHENA statute, received a custom-made piece of jewelry by Muncie’s Ashcraft Jewelers.