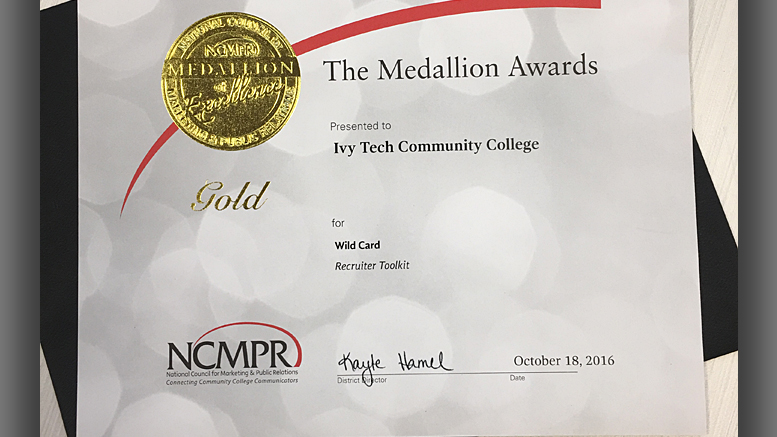 Ivy Tech Community College was awarded with 14 gold medals, 6 silver medals, and 10 bronze medals for various marketing projects and initiatives at the NCMPR awards for the 2015-16 academic year. The College has earned more than 200 awards from NCMPR over the last few years, in addition to several national awards for its successful branding and marketing campaigns.

Ivy Tech’s awards from the 2016 Medallion Awards are as follows:

Gold, Radio Ad, Single, “What do you REALLY know about community college”

Bronze, TV Ad, Single, “What do you REALLY know about community college?”

Bronze, Poster Series, “What Do You REALLY Know About Community College” Campaign Posters

Gold, Brochure/Division A, Want A Career As Soon As Possible?

The National Council for Marketing & Public Relations is the only organization of its kind that exclusively represents marketing and public relations professionals at community and technical colleges. As one of the fastest-growing affiliates of the American Association of Community Colleges, NCMPR has more than 1,550 members from more than 650 colleges across the United States, Canada and other countries.