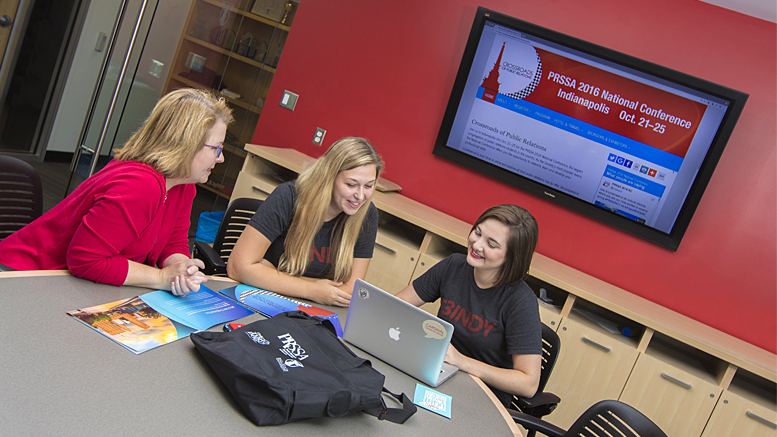 The two students are heading up a partnership between Ball State and the University of Indianapolis to serve as host schools for the Public Relations Student Society of America (PRSSA) 2016 National Conference, which is set for Oct. 21-25 at the Marriott Indianapolis Downtown.

The conference, expected to draw about 1,000 students, is the annual gathering for collegians studying public relations in the U.S. PRSSA has about 11,000 members preparing for careers in public relations and other areas of communications.

During the conference, students will network with professionals and peers and attend sessions to learn about the latest trends in public relations. Those attending also can take tours of communications-related businesses in Indianapolis.

“Since earning the right to host the event, our job has been to plan it from the ground up, and then execute daily operations,” said Riffle, a senior from Evansville, Indiana, who is serving as conference coordinator. “Along with the PRSSA National Committee and 30 volunteers, our team will be on-site setting up events, introducing speakers and ensuring great personal and professional experiences for all involved.”

A core of support

Joining Ronzio and Riffle will be the Core 12, a dozen Ball State students who will be on-site daily to help participants.

“The national conference is an annual event, but we have tried to make it our own, and we’ve really focused on networking as well as programming,” said Ronzio, a 21-year-old senior from Henryville, Illinois. “I attended last year’s conference (in Atlanta) and made a lot of connections and good friends. Networking is a key to developing and advancing a career.”

Co-hosting the conference has had an immediate impact on Riffle, Ronzio and other members of Core 12, said Deborah Davis, coordinator for the public relations program in the journalism department at Ball State and faculty adviser for Cardinal Communications, a student-run public relations company.

“I’ve had the chance to really get to know Katie and Hannah over the last few years,” Davis said. “They’ve approached this event like they do everything else, with focus and tenacity. Moving forward, this experience will put them in an elite group of students who have been able to complete a project of this magnitude.”

A winning partnership with UIndy

The right to host the annual event was sealed in 2015 at the national conference in Atlanta when members of Ball State’s PRSSA chapter partnered with the University of Indianapolis (UIndy), creating a 52-page proposal that swayed the judges.

Riffle said she believes several other factors also made a difference: the two universities’ strong public relations programs, UIndy’s access to in-town facilities and Ball State’s award-winning Cardinal Communications. Riffle and Ronzio are both executives with the firm.

“By collaborating with UIndy, we created a team with invaluable combined resources to make the event a success,” Riffle said. “The synergy of our combined team offers diverse experiences that one school could not achieve alone.”

”While UIndy has boots on the ground down there, we have the Holden Strategic Communications Center in the Art and Journalism Building, a multimedia planning facility that allows us to focus on keeping the project on track.”

Riffle and Ronzio, who is the conference’s communications director, has been working with other public relations students to craft a roadmap for future hosts.

“Even though there had been large PRSSA conferences for years, there was no set plan,” Ronzio said. “So our class, under the direction of Dr. Davis, has been working to develop a step-by step plan for next year.”

Davis points out that serving as co-hosts for the 2016 conference will not only bring national recognition to Ball State and the public relations program, but participation will have an impact on future students.

“By the time the conference is over, the host committee and the conference volunteers will have learned event planning, communications, strategic social media and so many other skills at a national level. Current students will be able to be stronger mentors for future students and apply these new skills to chapter activities and agency clients.”