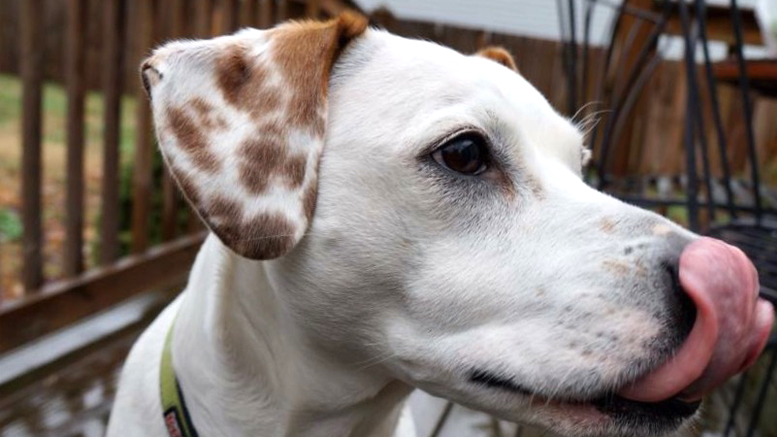 Maggie was a loving dog with beautiful ears. Photo by: John Gordon Carlson

One recent weekend, Nan and I traveled down to Nashville, Tenn., visiting our son and daughter-in-law.

Normally these visits follow a standard script, involving some great dining and plenty of laughs. This visit was far more subdued, however, as the day before Johnny and Stephanie had been forced to put down their beautiful dog, Maggie, she of the angelic white coat and the splotchy brown ears.

The whole way down I thought about fatherly things to say that might help ease their pain, but couldn’t come up with a blessed thing. When the fun-loving, energetic dog you’ve loved for 10 years suddenly starts running headfirst into walls, the result of a brain tumor, there’s not a lot you can do to make that animal’s loving family feel better.

What this brought to my mind, though, was a host of memories of our family’s first dog, Ro.

The name Ro, I should explain, was a shortened version of Roald, as in Roald Dahl, a favorite writer of mine, which we further altered to Roald Dahg.

Anyway, to say Ro, our gangly, swaybacked, red-haired mutt, lacked class, would be a vast understatement.

We got him from friends who lived in the country west of Yorktown, where Ro and his litter mates had been found in a hollowed out tree trunk, of all things. I liked him just fine, but Nan, Johnny and our daughter Katie loved him with a passion, despite the baseness of certain actions that sometimes left me gasping.

There was that spring day I saw him toss the cutest little bunny ever into the air with his teeth, open wide, then swallow it whole like in a Disney cartoon, much to my disbelief. I swear, Ro seemed inordinately proud of himself.

There was that autumn day when Ro made one of his many escapes from the house, slipping from my grasp through a narrowly opened door. When he looked back over at me it was with what seemed a taunting, bunny-eating, whatsamatta-slowpoke grin, as he trotted off on his merry way.

And there was three nights later, in the stands watching my son’s junior varsity football game, when an unkempt reddish hound blithely trotted onto the field, drawing an official’s whistle for delay of game, as Nan grabbed my arm and gasped, “It’s Ro!”

It took most of the Tiger JV football team to corral him.

And there was the next day when – canine genius that I am – I stupidly decided keeping a leash on his collar would give me a better chance of grabbing him the next time he bolted for the door. Returning home that afternoon, I discovered that he had defecated all over the floor, unable to process why I had attached his leash without taking him out.

Now Ro stood there, absolutely forlorn and crying as I hugged him hard and repeatedly apologized, maybe for the first time feeling the depth of love for Man’s Best Friend that the rest of my family had come by naturally.

Later, for a long time, Ro was sick, and the day finally came when we knew it was time to put him down. Never having done anything like that before, I told Nan rather cavalierly that I would help her through it, meeting her at the vet’s office at the appointed hour. Driving there, though, I grew more nervous.

When the time came, I took one step inside, and there greeting me were two sets of beautiful brown eyes, Nan’s with tears welling in them, and Ro’s, so loving and trusting, but not understanding.

Just like that I spun around and hurried back to my truck, then sat behind the steering wheel, bawling my head off.

About 20 minutes later, Nan walked out alone. Everything was OK, she said, comforting me when I should have been comforting her.

I guess the fact I can tell Ro’s story is evidence that you live and learn, and you get over such things, and that this, too, shall pass. There were other dogs after Ro and will be after Maggie.

But right now, if there’s anything I figure my son and I both know for certain, it’s that in matters of love and death and dogs, it’s perfectly all right for a grown man to cry.