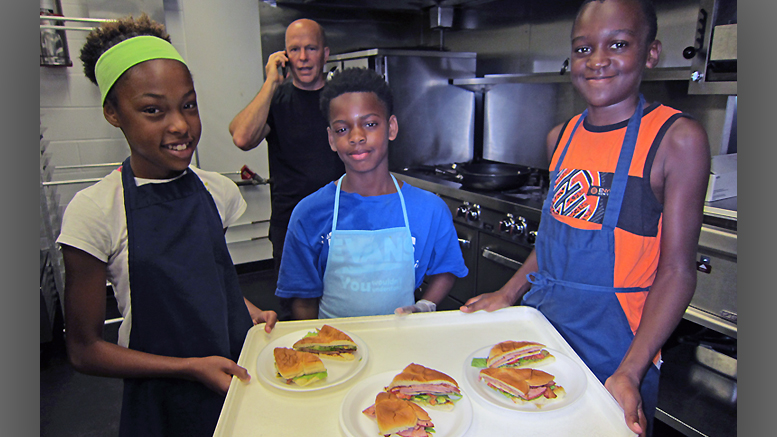 Members of Team Guac show off their sandwiches. Photo by: John Carlson

MUNCIE, IN – Cracking eggs and laughing nervously, three girls crowded around a stainless steel bowl in the tight confines of Inside Out’s Community Kitchen, using the cup-like halves of broken shells to separate the yellow yolks from the syrupy whites.

Nearby, other youngsters hacked aromatic strips of crisply fried bacon into bits.

Just across the gleaming food-prep table, meanwhile, other kids expertly scooped bright green chunks of fresh avocado into a bowl, and chopped luscious ripe tomatoes under the watchful eyes of a professional chef.

In the midst of all this, a sweet little girl soon shyly offered a visitor a measuring spoon with a dab of homemade mayonnaise, whipped up not five feet away, and flavored with a one-two punch of bacon and cayenne.

This, obviously, was a session of the Junior Chefs Culinary Camp.

“It’s just been a blast!” said Lauren Shirey, program director of Inside Out, a community development organization, which hosts the camp, a combined production of Yolanda Taylor’s Unity Center and the Fresh Directions Hot Meals for Kids program.

This afternoon there were eight polite, well-behaved youth in the camp, most at the younger end of the 10-to-16 age spectrum. Overseeing them was a handful of adults, including Shirey’s boss, Inside Out executive director Bob Ball; Shirey’s assistant, Julie Jarvis; staffer Angelica Lasley, and professional chef Shronda Logan. Lastly, there was the man Logan works for, Caleb Churchill, a towering figure in a black chef’s tunic and the executive chef at Horizon Convention Center.

Inside Out’s Community Kitchen is crowded with eight young chefs at work. Photo by: John Carlson

In the most general terms, the program aimed to teach these smart, independent youngsters how to safely navigate a kitchen, putting a tasty, nutritious meal together without automatically thinking “fast food.”

“It’s pretty much to show these kids that McDonald’s isn’t the only place to eat,” Churchill explained. “I know how hard it is, as a parent, to put a fresh meal on the table. The stuff that’s sitting in your cupboard, you can do things with it. We’re there to show, here’s what you can do with your own hands.”

Shirey, in turn, noted that besides the basics of cooking, the program aims to inspire youngsters to think about how higher education can lead to interesting careers, including ones in the culinary arts.

As Churchill would tell the kids at the end of this day’s session, “I encourage all you guys to find what you love and go after it.”

Shirey’s third goal? To forge meaningful one-on-one relationships between the youngsters and the instructors who voluntarily mentor them.

“We want the kids to feel special,” she said.

In this camp, they obviously did.

Having started the day’s session picking peppers, tomatoes and lettuce from the YMCA’s Community Garden, the kids were soon back at Inside Out for a quick lecture on kitchen safety, delivered by Churchill.

“Communication in the kitchen is huge,” he told them, insisting they warn others when something hot was being carried, that they walk with knives held straight down at their sides, and always peel food away from themselves.

Sandwiches were being featured on this day’s menu. By the time all were gathered in the professionally-equipped kitchen, they had been divided into Team Bacon-aise, Team Mayo and Team Guac. They were also informed their sandwiches would be judged on criteria including flavor, creativity, presentation and good sportsmanship.

“It’s a team effort to have a good product,” Ball explained.

Liberally arming themselves with kitchen tools and disposable plastic gloves, the kids were soon at work under the adults’ tutelage. Softening an avocado for easy scooping, Churchill showed how to roll it against a hard surface with one’s palm. Soon, a young girl wielding a sharp knife had one halved and was carefully slicing its pliant green flesh into small cubes.

With the addition of lime juice, tomato chunks and spices, Team Guac’s fresh guacamole proved irresistible, as kids and adults alike lined up to spread it on crackers. Only one girl sounded leery of the delicious stuff. 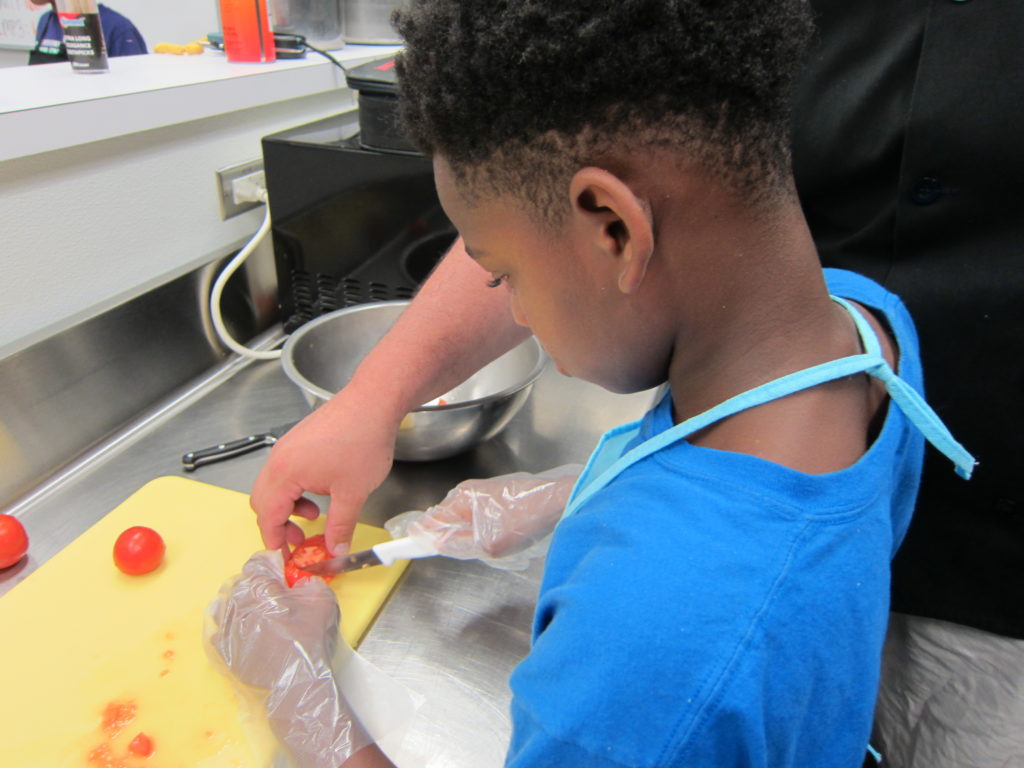 With a little help, a young chef safely slices a tomato. Photo by: John Carlson

Elsewhere, during the sampling of assorted sauces, kids’ faces scrunched up with distaste, or lit up with appreciation.

“That’s good to check your flavor combinations,” Shirey told them.

Others safely sliced multiple veggies, before sandwich essentials such as assorted breads and cheeses were distributed. And when Lasley later removed a tray from the oven, one bearing bread slices on which cheese had been melted, she proved she had taken Churchill’s spiel on kitchen communication to heart.

“Got a hot pan coming!” she warned.

This camp, Shirey noted earlier, was a pilot program to test its feasibility. Having already employed the volunteer efforts of well-known, Ivy Tech-affiliated chefs like Heather Pier, Rocky Fuller and Gary Abbott, another camp is anticipated in the autumn. And while the camp is intended to open kids’ eyes to potential career paths, for some it’s more about teaching a youngster an essential life skill.

One 12-year-old camper, Shirey said, told her she would use what she learned to help feed her younger siblings.

As Team Guac and the others wrapped up the session, they sculpted their sandwiches into culinary works of art for the final presentations. Team Bacon-aise offered the Big Boy, a creation of bacon, ham and pepperoni. Team Mayo offered the Sassy Sauce, a creation featuring, ostensibly, sassy sauce. Team Guac, in turn, offered the Guacamole Supreme, a creation of lettuce, tomato, cheese, guacamole, baked bacon and fragrantly fried ham.

Turning over the ham slices in a frying pan at the last minute, Churchill employed one of those cool little professional-chef wrist flips, the kind that, when non-chefs try it, the meat usually lands on the floor.

Twenty minutes later, after some spirited debate and serious taste-testing, Team Bacon-aise’s Big Boy had won. Still, every youngster in the room seemed happy, evidence that the camp’s good-sportsmanship rule was more than mere platitude.

And what, you wondered, would the next day’s camp session feature? Salads? Supper? Desserts?

Whatever it was, one thing seemed certain. These talented kids would continue learning to make some fantastic grub.