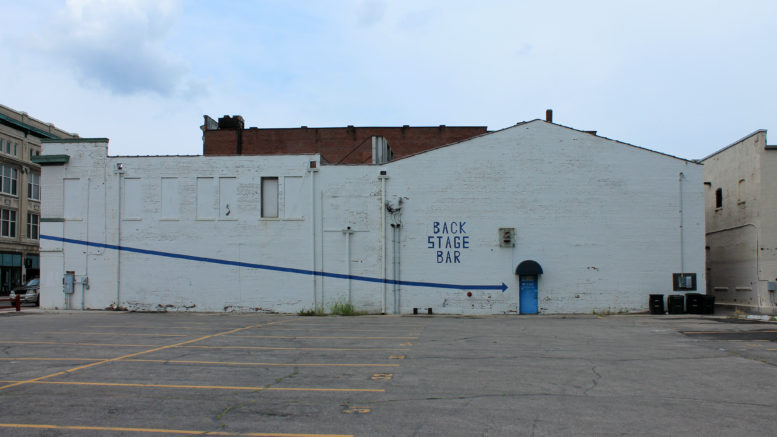 Proposed site for On the Mark, For the City, a collaborative mural project. Photo provided.

MUNCIE, INDIANA – On the Mark, For the City: A Muncie Mural Project by We’re Trying Collective

On the Mark, For the City is a collaborative mural project that aims to harness the power of art and creativity to celebrate the diversity of our community and its welcoming and inclusive nature.

This week, We’re Trying Collective announces On the Mark, For the City, a collaborative mural project for the City of Muncie. Following the tragic events at the Orlando Pulse Nightclub, the collective was inspired to work hand-in-hand with the community to create a piece of public art that would celebrate the city’s acceptance of and support for people of all backgrounds. The south wall of 306 S. Walnut Street in Downtown, Muncie was immediately recognized as a large, blank canvas ripe for transformation. In addition to being the perfect spot for a mural, this location is also currently home to the Mark III Taproom, Indiana’s oldest LGBTQ nightclub. Collaboration with the owners of Mark III Taproom and the building owner, Michael Wolfe, has been underway since May of this year.

In an effort to jump start fundraising for this ambitious project, We’re Trying Collective kicks off the mural announcement with an event packed week. This Thursday, the team will participate in the VERGE Muncie August Pitch Night where they will have five minutes to rally local investors, developers, and technology-based entrepreneurs behind the cause. The event is August 25thh from 5:30 – 8:30 PM and conveniently located at the Mark III Taproom. Tickets are $15 and can be purchased through Eventbrite muncie-pitch-night.eventbrite.com.

The following night, Friday, August 26th, We’re Trying Collective will host an evening of dueling DJs, dancing, and good vibes, again at the Mark III Taproom, the proposed site for the mural. Cocktail hour starts at 9 PM followed by music and dancing at 10 PM. Silent auction items donated by area artists will also be up for bid with winners announced the same evening. The five dollar cover and all auction proceeds go directly towards funding On the Mark, For the City.

We’re Trying Collective is a group of Muncie-based artists who work collaboratively to promote community interests while building a culture of inclusion and creative expression. The collective’s namesake is likely familiar to other long-time Muncie advocates. In 2006, the slogan “Muncie… We’re Trying” was created and promoted via bumper sticker by two young musicians, Adam Weber and Kyle Addison. It was praised simultaneously for its irony and for being representative of their genuine affection for their hometown. A decade later, the sentiment stands. As champions of Muncie and members of the arts community, We’re Trying Collective strives to leverage the effectiveness of arts and creativity to unite people through enhanced quality of place.

Learn more about the collective and on their website www.weretryingcollective.com and visit their CrowdRise campaign for On the Mark, For the City at www.crowdrise.com/on-the-mark-for-the-city1/fundraiser. Details about Thursday’s VERGE event and Friday’s fundraiser can also be found on their website.