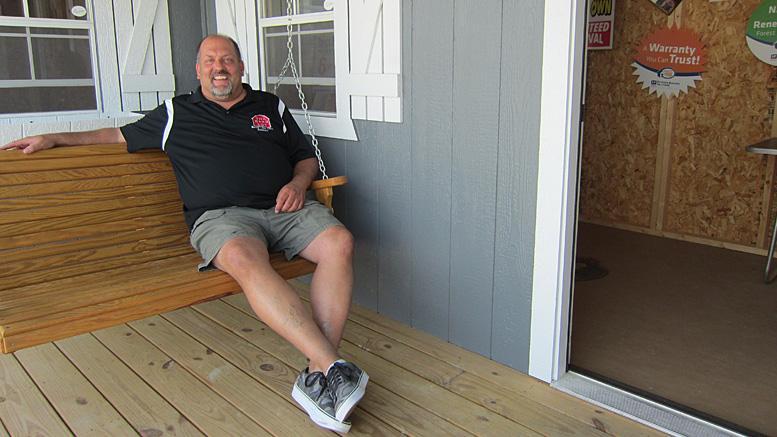 Scott Quirk, owner of The Barn Lot, relaxes on the porch swing of a tiny house. Photo by: John Carlson

MUNCIE, Ind. – If tiny houses are small, the interest surrounding them is not.

As he spoke, the owner of The Barn Lot was sitting in his business’s cavernous south-side storage building. Nearby, an industrial-sized fan blew heat out the door, his dad, Mike, rested on a chair made of recycled milk jugs, and his friendly yellow lab Marley ambled over to check out a visitor.

Outside on his sunny gravel lot sat numerous examples of tiny houses, the smallest measuring 8 x 12 feet, or 96-square-feet. At the other end of the spectrum, big tiny houses can measure 16 x 40 feet, for 640-square-feet, with a loft.

What’s behind their growing popularity?

“I think it’s just people wanting to take the complexity out of life,” said Scott, who also has Barn Lots in New Castle and Richmond, and is the owner of Tom Cherry Muffler. “They want to simplify things.”

Step past the porch swing found on many of these tiny houses and you enter a windowed, wood-fragranced, unfinished room of modest dimensions. Still, it’s nothing terribly claustrophobic, and that they are well-made seems certain. All are the work of Built-Rite Express, a Mennonite-owned company in Kentucky, and constructed of pressure-treated lumber by Amish workers.

Trucked down the road to where you want it set, your tiny house can be equipped with a small stove and fridge, a toilet (composting, if you want to go that route, or otherwise), furniture, a Murphy bed and more. Before being so equipped by the owner, one with a loft will cost you from $3,850 for a 10 x 16 foot model, up to $13,030 for the 16 x 40 foot whopper.

What are people using them for?

Guess it’s only fair that the quintessential “man cave” has spawned a lady’s version, where a woman can get away from empty beer cans, Slim Jim wrappers and you-know-who for some blessed peace and quiet. Other owners employ them as craft rooms, and still others as new versions of the classic Amish “mother-in-law house” for guests.

Still, in its purest form, the tiny house is just what its name implies – a place to reside.

Step inside one and there is a certain undeniable comfort in its smallness. After all, come midnight, you’re never going to wonder what that noise in the other room was. And if you’ve ever craved the simplicity that would result from divesting yourself of the material effluvia crowding your life, residing in a tiny house can be an appealing notion.

What’s more, others view tiny houses as a means to tackle some of the tough social issues affecting us today.

Six tiny houses, each measuring 8 x 16 feet, were sold to Bridges Community Services for use as single-person residences for people who, due to assorted behavioral or emotional issues, can be hard to house in more common settings.

Then there’s Eric Harvey, founder of Hoosier Habitat Rehabilitation in Indianapolis, who’s working to start a “veterans’ village” of tiny houses for low- to no-income military vets facing a broad range of mental and physical problems.

“I believe it’s a great plan,” he said, envisioning villages of six-to-ten tiny houses, paired with counseling and work programs, once certain zoning issues are hammered out.

Central to success, is that tiny roof over the individual’s head.

“With a lot of these guys,” Harvey said, “it’s just a huge change to be inside.”

As for folks buying a tiny house for reasons of their own, the structures can be placed on concrete pads, anchored to the ground with “hurricane straps” such as mobile homes employ or, in ones under 200-square-feet, simply placed on the ground. While that would be up to the buyer’s discretion, Scott noted not long ago, on a terribly windy day that knocked over a semi nearby, the tiny houses on his lot sailed through the blow without incident.

As for convenience, you can buy one off the lot, and watch it arrive. Delivery, by the way, is quick and free.

“We haul them down the road and bring them to you,” Scott said.

Most tiny house buyers, he added, also want homey touches such as the front porch with the Amish-made swing, and furniture like the poly-wood glider Mike was sitting in – which really is made of recycled milk jugs, hard though it is to believe. You can also buy a carport or garage to stick alongside it.

So, could Scott, who is not a tiny guy, live in a tiny house?

“Oh, I could do it,” he said, confidently. “I don’t think my daughters (he has three) could, but if it was just me, I definitely could.”