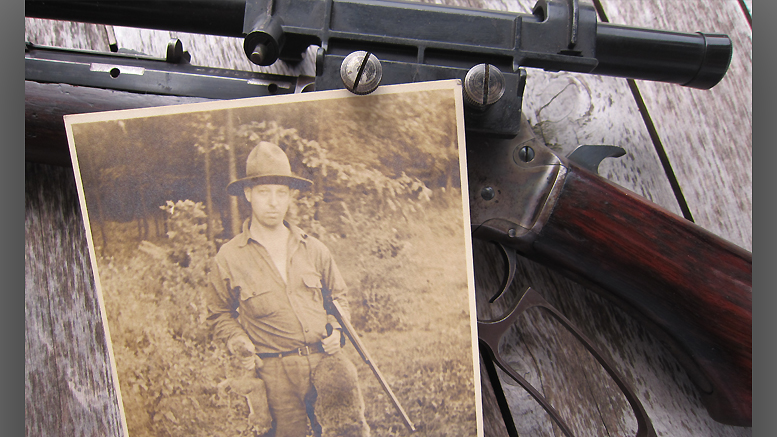 Years ago, Gramps used that rifle to put food on the table. Photo by: Nancy Carlson

My wife recently helped my sister clean out my father’s house up near Cleveland. In doing so, at my request, she also brought me my Grandpa Smith’s old rifle, which had been stored in Dad’s gun cabinet for years.

In asking Nan to do this, I was asking a lot, because she hates guns.

Nevertheless, I had spent countless boyhood hours coveting that firearm back when it was tucked away in my grandfather’s basement, and still wanted it.

Just for the record, it’s a .22 caliber Marlin with what I take to be a tube magazine, lever-action loading and an octagonal barrel. It’s also evidence that shootists back in Gramps’ day were no weaklings. With a scope on it, this rifle must weigh every bit of 20 pounds, if the estimate of my own scrawny arms can be believed.

All his adult life, Gramps owned this rifle. That’s from when he got out of the Army after World War I, through the years he rode Grandma around in the side-car of his old Indian motorcycle, through the Great Depression, World War II and, eventually, something of a hardscrabble retirement.

In those earlier years, that rifle put food on his table. How many squirrels fell to it, I can only imagine. He hunted rabbits, too, and with money tight, he wasn’t averse to hauling turtles out of my hometown’s Black River to make tasty soup.

But then there was hunting raccoons.

Frankly, I don’t know if he used this rifle or a shotgun for coon hunting. Maybe the latter. I do know that, for some reason, hearing his tales of those nocturnal adventures awakened in me a love for outdoor stories that has never waned.

My Grandpa Smith was not a well-educated man. Both he and my Grandpa Carlson had been born out of wedlock and grew up without their fathers, who to my way of thinking were the truest bastards in the family. On the occasional Saturday night my sister and I would spend with the Smiths – she and Grandma in one bed, Gramps and I in another – I’d beg him for a story, wrapped in the warmth of his words.

His lack of education notwithstanding, a skilled orator couldn’t have done better.

Looking back now, it seems like every night Gramps described was an autumn one, and a misty one, and through that mist, in the verbal pictures he painted, would faintly shine a perpetually full moon. The hunters always had a campfire, and maybe a little whiskey and some Lucky Strikes. Having loosed their hounds, the men would navigate the woods by the light of bobbing lanterns, the crunch of fallen leaves underfoot, following the distantly barking dogs. Eventually, the dogs would begin baying, a haunting sound guaranteed to send a chill up the spine, while signaling their success.

Finally, with the coon treed, came its abrupt end … about which, frankly, I don’t ever remember Gramps going into much detail. Maybe he figured I was too sensitive a kid to handle the truth.

Anyway, those stories made a lasting impression on me.

As Gramps aged, his hunting days, then his fishing days, ended. Falling from a ladder while painting a stairwell in his Baptist church, he fractured his skull. One night when I was in seventh-grade, he suffered a stroke in front of Patty and me, terrifying us while forever altering the course of his life, and his speech. When some heartless big-city corporation bought the company where he had worked for decades as a machinist, he lost his job – along with his pension.

He ended his working life as a high school janitor. Among his tasks was unsteadily climbing tall ladders like the one he’d fallen from years earlier, to change light bulbs.

Like my Grandpa Carlson, my Grandpa Smith was a wonderful fellow. Now, that old rifle Nan brought me home serves as a constant reminder of the fact, even as I revisit long-ago hunts in the woods of his memories.