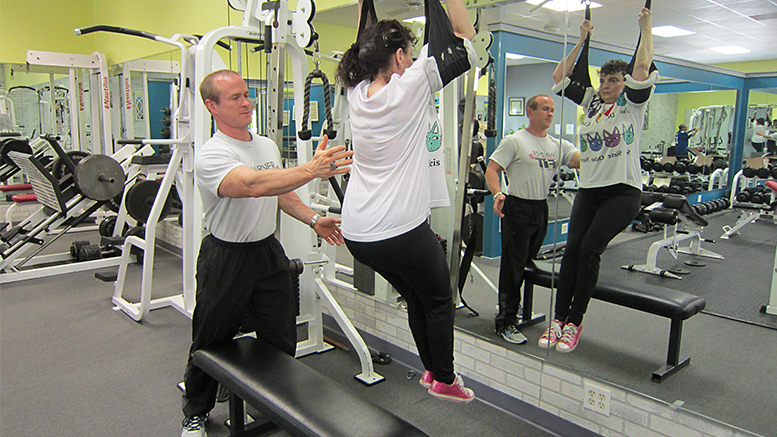 On and off the floor, Studio 22 client Lyla Spath works out under the watchful eyes of fitness coach Brad Warner. Photo by: John Carlson

In the photos from his most recent competition, a glowing Brad Warner smiles confidently in body-building poses, displaying muscles most of us never knew existed. To all appearances, even his muscles have muscles.

“When I step on stage,” Warner explained, “I have to have every muscle showing.”

As he spoke, he was momentarily resting on a couch at his fitness center, Studio 22. Inside its mirrored confines were rack after rack of black barbells, exercise machines, colorful balance balls and other workout equipment.

On a nearby table, meanwhile, a squad of bronze statuettes, heavily-muscled ones, were the Muncie man’s latest haul from June’s NPC Indiana State Championships and NPC Indianapolis Championships. At each of those body-building contests, in two consecutive weekends, he won three new titles, including the overall master’s division title, the master’s title for competitors age 40 and older, plus the men’s open competition in the welterweight division. That’s six titles, despite not having competed since 2013.

If you think that means he’s dedicated to staying in tip-top shape, you’re right.

“I always have been,” he acknowledged.

In those intense photos, Warner seems nothing so much as skin, a little gristle and lots of bulging muscle. When competing, he gets down to just four percent body fat. Even away from competition he maintains about seven percent body fat, which means if you are ever out looking for him, don’t bother stopping by the doughnut shop.

Lest you believe his interest purely centers on sculpting his physique, he also competes in powerlifting, as evidenced by his results from 2015’s Next Generation Powerlifting Federation competition.

Keep in mind, if you discount the extreme musculature hinted at by the rippling arms poking from his gray T-shirt, Warner is not a big guy. But at the NGPFs, where he weighed in at 162 pounds, he curled 145 with his back straight against a wall, eliminating any effects of body English in favor of brute strength.

Taken altogether, with assorted local, national and world titles from that event and others, it’s a slew of records, and something else besides.

Impressive as all that competitive success sounds, what does such strength mean to the average man – or woman, or kid – he encounters on the street? Maybe it’s best to think of the answer in fictional terms.

“If Brad was painted green,” said Lyla Spath, “he’d be a double for the Incredible Hulk.”

Even Warner acknowledges, though a trifle facetiously, that being so muscle-bound can be intimidating.

“I have to be careful around children,” he joked. “I can easily scare them.”

But back to Spath, who is one of the female clients he coaches at Studio 22. Employed as the barn manager for Warner’s stables, where he keeps his two rescue horses and three miniature ones, along with her own beloved little horse Pondy, Spath has worked out here for years. Warner’s mother also comes in to work out, as does his life partner, Christina Skaggs, and her mother, a gardener who helps stock the body-builder’s training table with nutritious produce. 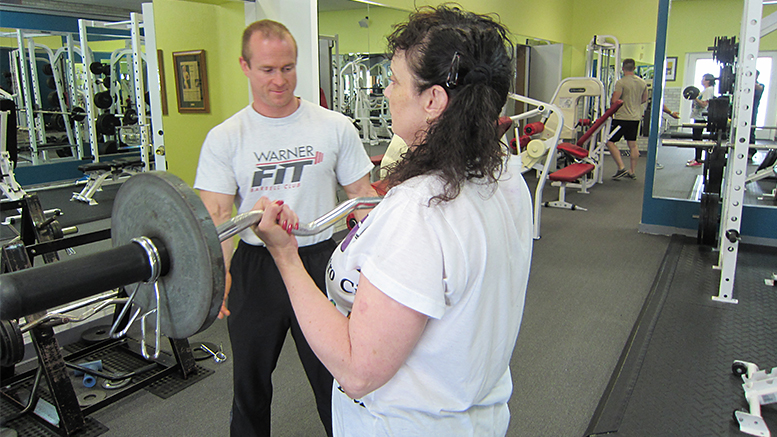 Another woman, Nancy Smith, is a 68-year-old retired psychologist who has long been a Studio 22 client. While working out to stay fit was nothing new to her, it was just last year that Warner urged her to compete in her first powerlifting event.  The result?

“I got a couple medals,” she said, noting they were in the bench press and curls. “Brad’s really brought me a long way. I love it. I really do.”

Given her former profession, Warner’s guidance particularly taught her something about the restorative power of her workouts. During an 18-moth period between 2007 and 2009, a series of family losses put her in a real “funk,” she recalled. But then Warner’s help returned her to her old form, physically and emotionally.

“He really brought me back,” Smith said. “I’m so grateful to him.”

“About two-thirds of my clients are women,” Warner said, noting many come wanting to lose weight. They have included some in their 70s and even 80s, one of whom was working to overcome the effects of a stroke.

While the aforementioned Spath will turn 60 in December, that approaching milestone doesn’t bother her, she simply decided to hike her fitness level. Working out five or six times a week, she far exceeds the three weekly visits Warner expects of his clients.

Her reasoning? It’s a matter of maintaining one’s fitness when, over time, the very nature of human physiology is to sag.

“You can’t do what you’ve always done and stay in the same place,” she explained, just minutes before she found herself suspended in mid-air by two padded arm harnesses, doing leg lifts under Warner’s watchful eyes. “I’ve done things in here that I never would have thought possible. It’s like, circus guys do that.”

Working toward competing in powerlifting, Spath is making good progress. For many women her age, athletic achievement was largely denied them in their youth, the fitness coach noted. Suddenly encountering something like competitive powerlifting, they realize with a shock they can do this.

“She’s had dramatic physical changes,” said Warner, who knows well what that is like.

A Wes-Del High School graduate and former teacher who also holds a bachelor’s degree in biology from Ball State University, Warner weighed 100 pounds back in eighth grade, but was attracted to physically intense sports like wrestling and football.

Those concerns drove him into the weight room. By his senior year he weighed a muscle-packed 160, then embraced body-building as a 21-year-old college student. It wasn’t until he was 39 that he took up powerlifting.

Now at age 41, Warner moves about Studio 22 with a graceful, catlike litheness that almost belies the intensity of his feelings for his business, his work and his vision.

“The only thing I do is personal training,” he said fervently, explaining it has the ability to remake lives, but only if his clients stick with it.

In that, he teaches and leads by example. Awaiting the arrival of his next clients and glancing about Studio 22, which he has owned since 2002, he seemed a man completely in tune with his place, and his mission, in life.

“This,” he said, with an encompassing gesture, “is me.”