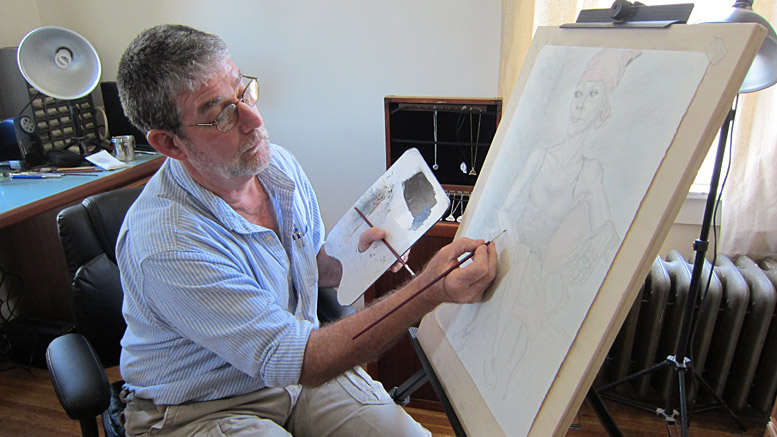 Artist Allan LaBerteaux works on the portrait of a lady named Destry. Photo by: John Carlson

MUNCIE, IN— If you ever engage Allan LaBerteaux in a conversation about the course of his career, don’t expect a lot of bragging.

“I’ve never had a job I was qualified for,” the former architectural millworker, boat-builder and current jewelry-maker and artist joked, but only half facetiously. “I may design a car next week. You never know.”

His has been an interesting life, if not a conventional one.

A 59-year-old Muncie native and 1974 Northside High School graduate, LaBerteaux spent his earlier years working with wood, developing skills attested to by the homemade cabinets, workbench and such now filling the art studio in his apartment. When his marriage ended in the 1980s, he sold his lawn treatment company here and headed to Maine, enrolling in boat-building school.

“I’d grown up in small boats,” he said, explaining his passion for them. “We were a boating family.”

Upon graduation, a job awaited him in St. Croix of the U.S. Virgin Islands, where he worked on boats and also raced sailboats in the Caribbean. It was an idyllic life, he suggested, until calamitous Hurricane Hugo nearly wiped out St.Croix in 1989, a disaster that suddenly made his woodworking skills invaluable. Doors. Windows. You name it. He busily made anything and everything involving wood that people needed to rebuild from the storm.

That was fine until LaBerteaux reached his mid-40s and felt the need to slow down – or more correctly, sit down.

“I didn’t want to stand up anymore,” he said, of his previous work. “That’s a young man’s job.”

At just under six-feet-tall, LaBerteaux has short salt-and-pepper hair, a thin grayish beard and wire-rimmed glasses that give him a studious look. Leading a guest through his sparely furnished second-floor apartment in an old red-brick building downtown, he happily commented on the quality of the light inside, and the zen-friendly lack of clutter.

He was no artist when he ditched working with wood to take up jewelry-making. Matter of fact, he wasn’t even a jewelry maker. But by combining his natural creative streak with jewelry-making lessons found online and in some books he bought, he set about learning the craft and was a quick study.

Carving molds from thick chunks of hard green wax, he was soon producing a range of fine looking items, from intricate rings to necklaces featuring elongated figures in yoga poses, yoga being a discipline he had practiced for years. In the process of creating these pieces, he would also initially sketch them.

“You can’t make anything three-dimensional without drawing it first,” he said, describing the process as “thinking out loud on paper.”

With plenty of practice and energy, LaBerteaux was on the cusp of really pushing his jewelry business when the economic crash of 2008 hit. It did to his business prospects what Hurricane Hugo had done to his adopted home nearly 20 years earlier.

“I really thought 2008 would be my year,” he said, a little wistfully.

Instead, his market dried up.

What saved him then is called “Chaney.” In St. Croix, it is a form of jewelry featuring colorful shards of old china, especially the Dutch type known as Delft. Having been a major trading post for the Dutch back in the day, St. Croix provided an endless supply of discarded, broken pieces for the right person to recycle. Bicycling, LaBerteaux would ride about collecting the distinctive blue-and-white shards, then fashion them into affordable souvenir necklaces. But who would buy them?

Setting up business in a kiosk by the cruise-ship docks, he was soon making and selling many of the pieces. 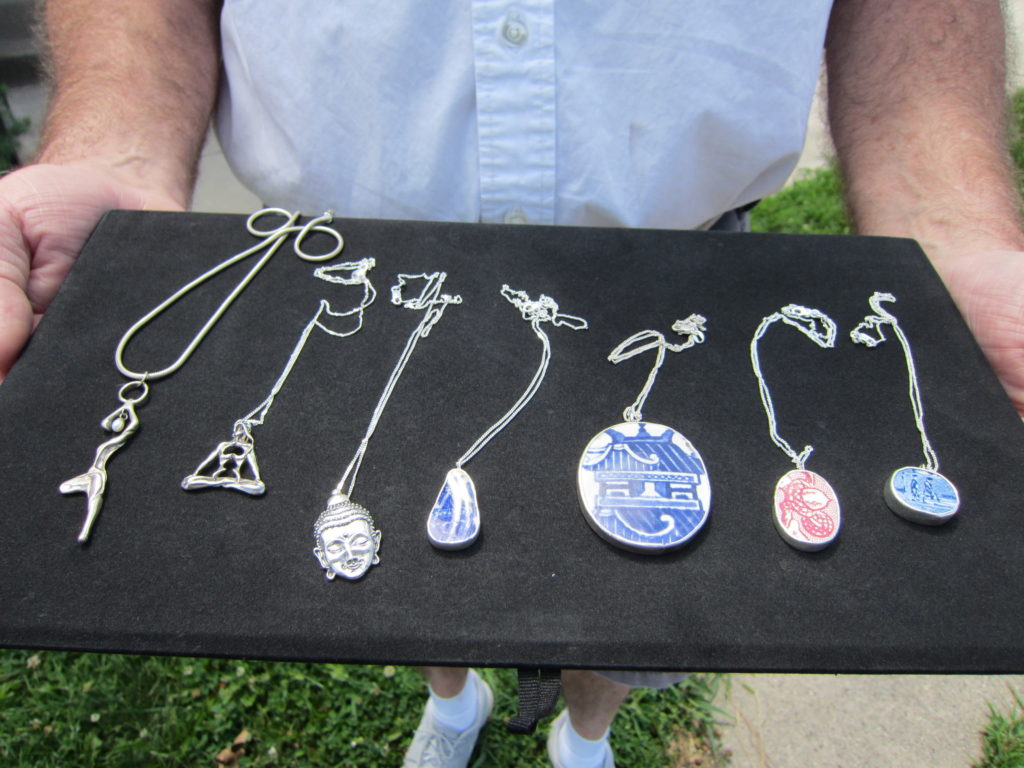 “It was a pretty good item,” he recalled, happily. “Everything I bring off my workbench, some fool’s gonna buy it.”

But his new line of work was more than just a sales opportunity. Suddenly, in operating the kiosk, he was having more interaction with the locals than he’d had before, and delighted in their growing friendship. He also had what turned out to be a fortuitous problem: Sitting in the kiosk, what would he do with his hands all day?

Meet with LaBerteaux now, and he’s never without two fine looking architectural drafting pencils in his breast pocket, writing instruments with incredibly fine points. Earlier, he had used ones like these in sketching out his jewelry ideas, and become quite good at it, though he never anticipated becoming an artist back then.

“I did not have aspirations to draw people,” he said, noting that when he started, he began sketching examples of St. Croix’s 18th century buildings.

“It wasn’t a big jump when I started drawing people,” he said, though it did take some dedicated practice to get good at it, especially faces, the subtleties of which, he said, are “very keen.” Gaining experience, he kept drawing people he encountered at his kiosk, plus the locals, the common folks who were becoming his friends.

“After a period of time,” he recalled, “somebody reached for their wallet and said, ‘I’ll buy that!’”

Just that simply, a portrait artist was born. While he drew plenty of passengers, he was never one of those five-minute portraitists. “I’m drawn to detail,” he explained, noting he would begin with a rough sketch, plus photographs, completing the pictures later and mailing them to his subjects.

All told, LaBerteaux spent six years in that kiosk at the cruise-ship docks of St. Croix.

It was only recently that he moved back to Muncie to take care of his 93-year old mother, Shirley. At least, that’s the way he sees it, he admitted with a chuckle. His mother is convinced she has finally saved him from the horrors of life in the Caribbean.

Now that he is back home, he’s enjoying it. An ardent bicyclist, he likes the profusion of bike lanes and Cardinal Greenway. He also appreciates the early-morning yoga practice at Tuhey Pool, something he never figured to encounter here before coming home.

Willing to accept commissions, he is busy setting up his art and jewelry-making business, as well as its website – Allan-LaBerteaux.squarespace.com – in the meantime, keeping his skills sharp by drawing nude models at Ball State University once a week.

“They’re so kind, letting me in over there,”he said, noting his work will hang in Muncie’s Golden LivingCenter nursing home the month of August.

Carrying his art supplies in a backpack that’s always with him, he regularly sketches fellow customers, some unwittingly, at local coffee shops. Afterward, he shows some their pictures.

“I’ve never had anybody say anything but, ‘Oh, thank you,’” he said. “I fill up (sketch) book after book. You’ve got to go out and sketch, every day. … You’re never done!”

This day, he was finishing the portrait of a woman who had come to work on his apartment’s windows. She was a hard worker, he said, her hair wrapped in a red bandana, and had been fascinated to learn he was a artist. The two of them hit it off. When she told him, “Oh, I’ve always wanted to sit for a portrait,” he invited her to do so.

Her name was Destry, she told him, her parents having named her after the old John Wayne movie, “Destry Rides Again.” While she first asked if she could spruce herself up, he wanted her to pose just as she was. Sketching her, then painting her in the “dry brush” style he favors – one employing diluted black oil paint and occasional faint color – he got to work. They talked about her job and her life as he worked, capturing her from the red bandana and finely toned arms to the musical clef symbol she’d tattooed on her own left hand.

In doing so, he captured something of her gritty, winning persona, too.

“She needed to be recorded,” LaBerteaux recalled fervently, noting how he loves to listen to his subjects’ stories. “Everybody wants to leave something behind to show that, ‘I was here!’ That’s what I do.”