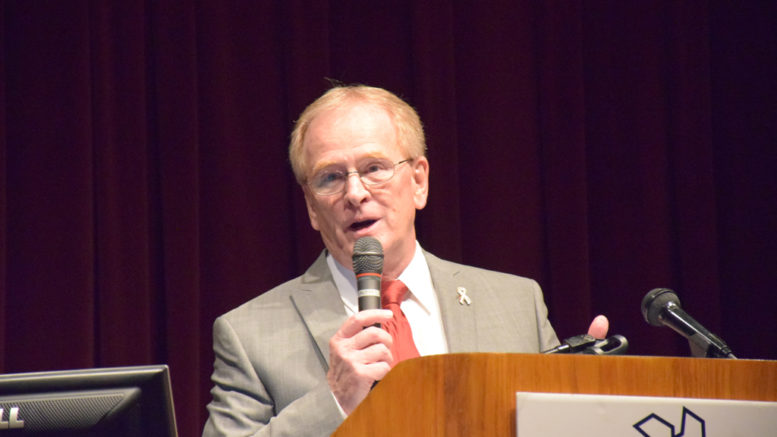 Muncie, IN —Mayor Tyler today joined the Wear Orange campaign (www.WearOrange.org) by declaring June 2nd to be National Gun Violence Awareness Day in the City of Muncie to honor and remember all victims and survivors of gun violence and to declare that we as a country must do more to reduce gun violence. The proclamation encourages all citizens to support their local communities’ efforts to prevent the tragic effects of gun violence and to honor and value human lives.

“We are here with a communal sense of a crisis around the fact that gun violence devastates too many American families and neighborhoods, especially in urban areas, and disproportionately affects communities of color. We are dedicated to working together to promote solutions and a culture that does in fact, save lives,” says Mayor Dennis Tyler.

In 2013, a small group of teens at a South Side Chicago high school asked their classmates to honor the life of their murdered friend, Hadiya Pendleton by wearing orange – the color hunters wear in the woods to protect themselves and others and a color that reflects the value of human life. They inspired the Wear Orange campaign (wearorange.org), a coalition of more than 200 non-profits, cultural influencers and elected officials working to reduce gun violence in America. Spearheaded by Everytown for gun Safety, the campaign asks Americans who believe we can do more to save lives from gun violence to do one simple thing on June 2, National Gun Violence Awareness Day; Wear Orange. Those who wear orange pledge to honor the lives of Americans stolen by gun violence, to help keep firearms out of dangerous hands and to protect our children from gun violence. Wear Orange has already reached more than 220 million people worldwide and is fast becoming the symbol of the gun violence prevention movement.