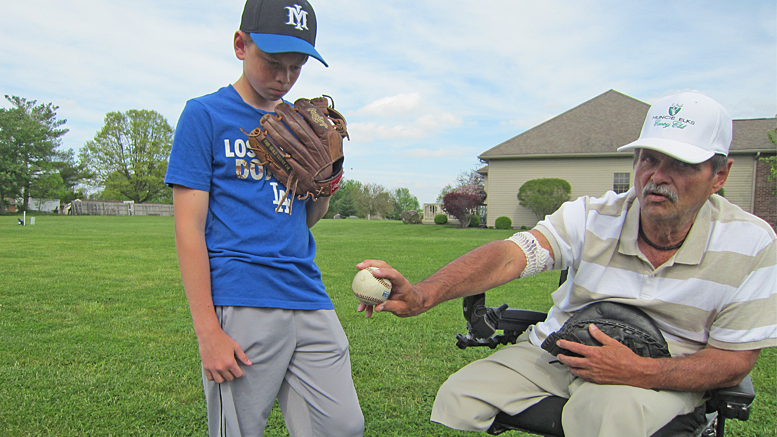 Bob Gillum and his grandson, Kade Oliver, share a love of baseball. Photo by: John Carlson

MUNCIE – Standing before you with a worn ball glove on his left hand, a baseball in his right and a flop of brown hair falling across his forehead from under a ball cap, Kade Oliver looks like the 14-year-old kid that he is.

But when he’s winding up on a pitcher’s mound, his arching right knee seemingly chin high, he looks every bit the athlete he’ll likely be five, ten, even 15 years from now.

In a wheelchair 60 feet away, is the man who’s helping him get there – his grandfather. 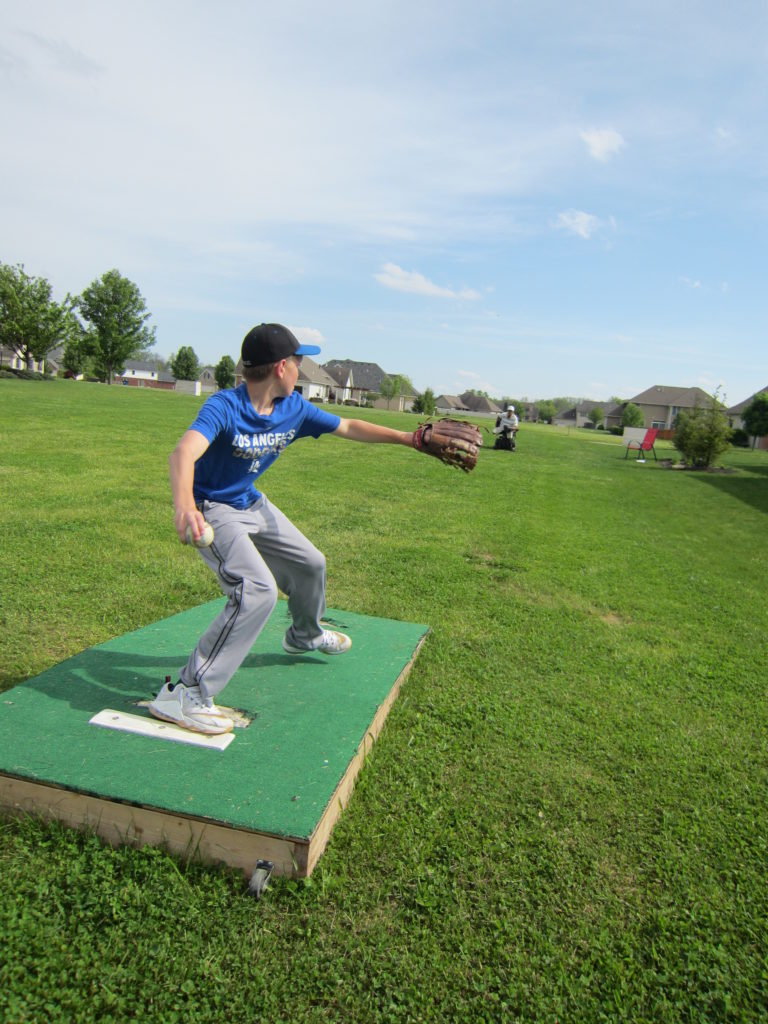 Kade Oliver fires a baseball at his grandfather, Bob Gillum, 60 feet away in his wheelchair. Photo by: John Carlson

“It’s been a regular thing,” Bob Gillum said of their practice sessions, which started when Kade was 6, and zeroed in on pitching once the boy turned 8. “We’re trying to get as good as we can get.”

Even now, the kid is no slouch. A Delta Middle School eighth-grader, he is playing summer ball, pitching for the Indiana Magic, a traveling team. Observed from down where his grandfather fields them, the baseballs make a satisfying smack against the black leather of Bob’s catcher’s mitt. This, despite the fact that these days, the kid and his grandfather are concentrating more on technique and control than speed.

“I have a fastball,” said Kade, who is the son of Justin and Brandie Gillum Oliver. “And I have a four- and two-seam curve ball, a change-up and a back-up slider.”

“I call it a sinker, myself,” Bob clarified.

In the matter of pitching accurately, when grandfather and grandson practice, being on target is pretty much a necessity.

“If I wasn’t in this wheelchair, I could catch ‘em all,” said Bob, a General Motors retiree. “Kade’s gotta be pretty accurate for me.”

Baseball, to be sure, is in Bob’s blood. Now 67, back in the day he pitched for the Yorktown Tigers, then spent a couple years playing semi-pro ball with the Muncie Reds. While with them, he was schooled in the art of pitching by two extraordinary players, they being Indiana’s 1963 Mr. Basketball, Rick Jones, and Ananias Thompson. The latter, who wound up playing in the Dodgers’ organization, taught him the value of a good change-up.

And what did he learn from Jones, who went on to the White Sox organization?

“He taught me about everything,” Bob said.

Unfortunately, a change-up wasn’t going to help much where he was soon headed.  Drafted by Uncle Sam’s team, he served in Vietnam as an Army military policeman. While there, he also came into contact with Agent Orange. Is that what eventually put him in the wheelchair?

“In a roundabout way, yeah, I think so,” Bob said, describing the spate of health issues he later developed, including high blood pressure and diabetes.

Six years ago, one of his legs was amputated above the knee. Six months later, his second leg was amputated above the knee. The fact he remains active testifies to his toughness, but it’s a story from years before, one perhaps marking the onset of his health problems, that might be a truer measure of the man. He was on a golf course when he suddenly suffered an aortic aneurysm. What happened next?

“I drove myself to the hospital,” he recalled, simply.

It seems extraordinary. But if you mention the strength revealed by that act, or by his continued commitment to coaching Kade despite the loss of his legs, Bob greets your remark with embarrassed silence.

This does not surprise his daughter, however.

“He’s the most selfless man I ever met in my life,” Brandie said. “I would have to say it melts my heart to see him in his wheelchair, passing all this on. I find it very moving.”

Just as special is the bond it has created between her father and her son.

“They’re very, very close,” she said. “I don’t know what they would do without each other.”

Such thoughts sometimes enter Bob’s mind, too, he hints.

But before long he and Kade are back to practicing, the boy pitching from the plywood mound resting on the lawn skirting the eastern edge of their west-side home.

“Keep your elbow up and stay close!” Bob hollered.

After they worked through their typical 50 to 60 pitches, he acknowledged he has a passel of younger grandkids than Kade, all baseball lovers, too, meaning his services are likely to be in demand for years to come.

When Kade, a polite and soft-spoken youngster, was asked if he would make it to the Big Leagues one day, he answered with a laugh, but not a laugh of doubt. It was more a laugh of joyous possibilities.

As for Bob, he remained in coaching mode.

“We’re just trying to improve at every level,” he said. “I want to give it the best we can do.”

Then he cast an appraising, admiring eye at his grandson and smiled. “Right now,” he said, “we’re just waiting for him to grow.”