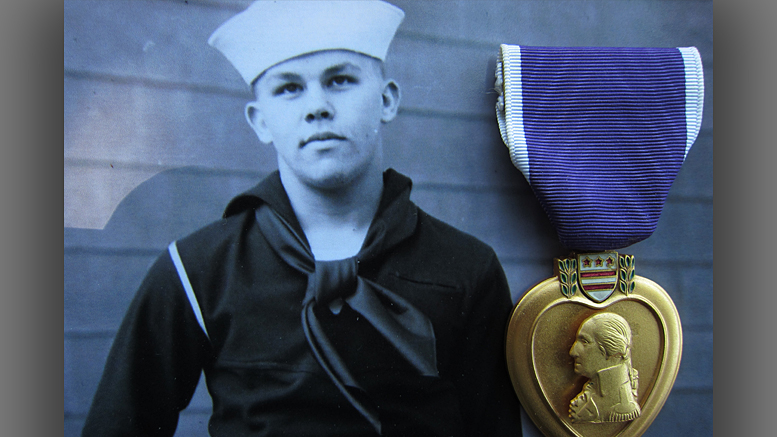 Gordon Carlson is pictured as a 17-year-old Navy recruit in 1943. Injured two years later in the battle for Okinawa, he earned a Purple Heart. Photo by: John Carlson

It was an accidental find, of sorts.

In the process of moving my 90-year-old father into a nursing home recently, my sister Patty came upon a Purple Heart – the medal that honors those Americans injured in combat – pristinely packaged and shining splendidly, tucked away in his chest-of-drawers. I don’t know that I had ever seen this particular medal, which appeared to be a government reissue, but the fact is that now, with it cradled in my hands, I was silently disappointed.

“We found it!” she said, and then I was relieved, too. “It was in the safe in the basement.”

“It” was also a Purple Heart, but not the display-quality showpiece the other one was. This one’s box had been roughed up over the years, then further damaged when floodwater seeped into that aforementioned safe. The medal itself even had a nick or two in it, and its purple fabric was slightly soiled.

But this medal was a family treasure, because it was the Purple Heart my Dad had been presented as a young sailor back in 1945. Furthermore, its ragged box was particularly precious, because of what was revealed when you lifted out the medal’s stiff mounting. Behind it there was a stained fold of cotton gauze. Wrapped inside that gauze was a rough, rectangular piece of metal, the shrapnel that, spinning wildly, had ripped what looked like a moon crater deep into the soft flesh of my Dad’s right shoulder.

It happened during the battle for Okinawa when, anchored off the nearby island of Ie Shima, where legendary Hoosier war correspondent Ernie Pyle was killed by a sniper, a kamikaze hit my Dad’s ship and exploded. A teenage gun captain, Dad regained consciousness to find himself sprawled, bleeding, on the ship’s deck, and two of the other four guys in his gun crew dead. One had been cut in half by the blast. The other, my Dad’s best friend, was kneeling on the deck as if praying, his whole back blown away.

Who lived, and who died, was a matter of luck, of fate. When that Japanese plane hit, they had all been within inches of each other.

Anyway, I’m writing all this as a precursor to wishing you the very best this Memorial Day weekend.

This holiday being the unofficial start of summer, the air will be perfumed with the scent of grilling steaks, millions of melting ice cream cones will be licked, and a whole lake’s worth of cold beer drunk. The 100th running of the big race will happen down in Indy. There will be ball games galore. And some families, will pause to visit and decorate the graves of loved ones who have gone on before.

But during this weekend, of all weekends, let’s not forget the true meaning of Memorial Day, which was established to honor those men and women in the military who lost their lives while fighting for America, for us.

In the mind’s eye, their faces stretch to infinity, their ranks from the Revolutionary War, Civil War, the World Wars, Korean War, Vietnam War and others most recently bolstered by the dead from Iraq and Afghanistan. While we are thinking of them, the lost, it’s also the perfect time to thank a veteran for their service. You can bet that, come Memorial Day, it will be the veterans who most fully feel the sacrifices of their departed comrades.

This will undoubtedly include one 90-year-old former sailor, living out his years on the west side of Cleveland. My Dad gets confused about a lot of things now. Still, I know he’ll remember a horrific day 70-odd years ago, and a buddy blown in half, and his old best friend, cut down in the prime of life, bent over on the deck beside his gun tub, kneeling as if in prayer.

John was interviewed on WLBC this morning, kicking off his writing for the Muncie Journal. Click below to listen.