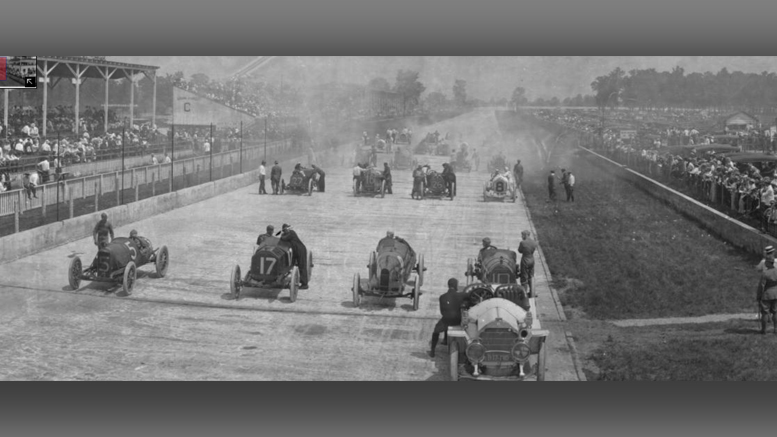 Indianapolis—The countdown is on to the 100th running of the Indianapolis 500, and the Indiana Historical Society (IHS) is marking the occasion with four historic panoramic images, now available to the public online.

The panoramic images date back to the inaugural running of the Indianapolis 500 Mile Race on May 30, 1911. Taken by Charles F. Bretzman, the race’s first official photographer, two of the surviving panoramic images feature the action on the track, including the starting lineup of 40 cars and drivers. Another of Bretzman’s black and white images captured the flavor of the day, focusing on some of the 80,000 spectators who were onhand to witness history.

“He ranked with the best of the best, and just got lost in the shuffle somehow, so it’s wonderful that this body of work is there for people to appreciate,” said Bretzman’s granddaughter Margaret Dexter. “I’m just thrilled that they’re being unearthed and being given their due as mother would say, ‘to really realize what a wonderful eye he had.'”

Bretzman went on to serve as race photographer for several more years, capturing balloon and automobile races through 1913. The Indianapolis-based photographer also made a name for himself in portrait photography, and his images of Carl G. Fisher, IMS co-founder, Paul V. McNutt, former Indiana governor, and Charles W. Fairbanks, former U.S. vice president under Theodore Roosevelt, are among those included in IHS’s digital image collections.

(Images are direct linked at the bottom of this Muncie Journal page.) Researchers who want to view a selection of Bretzman’s work in person can do so at the Eugene and Marilyn Glick Indiana History Center, located at 450 W. Ohio St. in downtown Indianapolis. The History Center’s William Henry Smith Memorial Library is free and open to the public from 10 a.m. to 5 p.m., Tuesdays through Saturdays.

Researchers specifically interested in panoramic images will find IHS’s digital offerings have doubled since this time last year. In 2015, IHS received a grant that allowed the organization to scan 686 panoramic photos from its archives, and there are now more than 1,000 available online. Completed in April 2016, the project was supported by the the Institute of Museum and Library Services (IMLS) under the provisions of the Library Services and Technology Act (LSTA), administered by the Indiana State Library. Project results will also be included in Indiana Memory and the Digital Public Library of America.

For more information about IHS’s panoramic digital offerings, or to learn how to donate items, call (317) 232-1882 or visit IHS at www.indianahistory.org.

About the Indiana Historical Society
Since 1830, the Indiana Historical Society has been Indiana’s Storyteller, connecting people to the past by collecting, preserving, interpreting and sharing the state’s history. A private, nonprofit membership organization and an Affiliate of the Smithsonian Institution, IHS maintains the nation’s premier research library and archives on the history of Indiana and the Old Northwest and presents a unique set of visitor exhibitions called the Indiana Experience. IHS provides support and assistance to local museums and historical groups, publishes books and periodicals; sponsors teacher workshops; produces and hosts art exhibitions, museum theater and outside performance groups; and provides youth, adult and family programming.

Bird’s Eye View of Indianapolis Motor Speedway During 500 Mile Race
This Cirkut photograph provides a spectacular view of the track, infield garages, aerodrome and surrounding countryside during the first 500 Mile Race. The race was won in six hours, 42 minutes and eight seconds by Ray Harroun who was driving his #32 Marmon Wasp.
http://images.indianahistory.org/cdm/singleitem/collection/dc013/id/177/rec/2

Starting Line-up, 500 Mile Race, Indianapolis Motor Speedway
This image shows forty cars with their drivers and mechanics on the straightaway before the start of the first 500 Mile Race. A crowd of 80,000 spectators witnessed the event from behind the concrete retaining wall. The pace car, a Stoddard-Dayton with Carl G. Fisher at the wheel, sits to the right of the field.
http://images.indianahistory.org/cdm/singleitem/collection/dc013/id/169/rec/2

North Grandstands, Indianapolis Motor Speedway During 500 Mile Race
A view of the north end of the track shows some cars in the distance that have just rounded the fourth turn and are approaching the straightaway. The new bricks are stained from leaking oil that made the track treacherous, especially in the turns. Sand was shoveled onto the track to try to improve traction during the race.
http://images.indianahistory.org/cdm/singleitem/collection/dc013/id/178/rec/3

North Infield, Indianapolis Motor Speedway During 500 Mile Race
Spectators viewed the first 500 mile race from their open touring cars in the north infield, where cars parked for free. In the distance, there are trees on the inside of the fourth turn, some newly constructed grandstands, bleachers and an over-the-track bridge to the infield.
http://images.indianahistory.org/cdm/singleitem/collection/dc013/id/166/rec/4