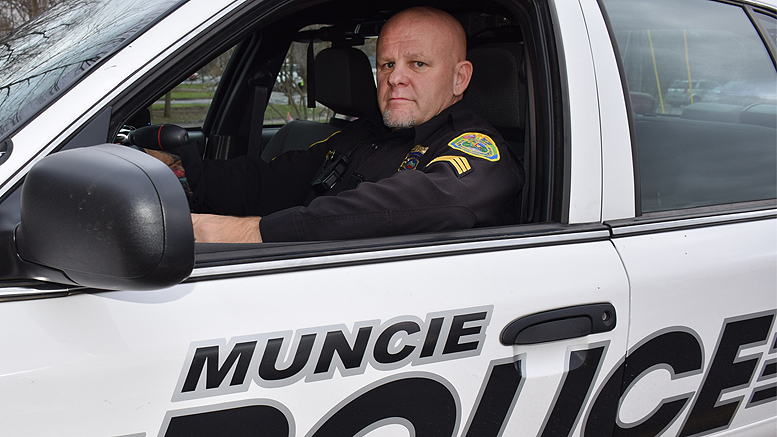 On average, more than one mass shooting occurs every day in the U.S. That’s according to a New York Times article defining events involving a firearm that leave four or more people dead or wounded.

It’s a scary statistic to be sure. And while the risk of a gun showing up in one’s workplace is low compared to many other on-the-job hazards, especially in Muncie, it’s one that still remains on the back of many of our minds.

After the Columbine High School incident and other school shootings in the early 2000s, focus tended to remain on schools when it came to training employees on how to react in the moment. But it’s a rare occurrence when police train white collar workers in their offices.

Not so at Ontario Systems on Kilgore Road, where the company’s Crisis Management Committee and the Muncie Police Department asked an important question earlier this year: “How prepared would we be if an active shooter entered our building?”

The training carried out at Ontario’s headquarters in that question’s wake was the first of its kind in Muncie, and sets a precedent for other businesses in the area hoping to mitigate risk.

“I hope it’s easy to see how much we appreciate our local agencies being proactive about this issue alongside us,” says Jill Lehman, Ontario Systems Chief People Officer. “It truly demonstrates their commitment to us as a business, being open to this kind of training.”

“We have an obligation to provide a safe workplace for our staff and visitors,” adds Deborah Wright, a member of Ontario Systems’ Crisis Management Committee. “It’s an unfortunate reality that terrible events like these take place every day in our country, on average. We just wanted to be as prepared as possible.”

Wright and her colleagues went looking for a solution, and eventually connected with Muncie Police Department Training Director Jeff Lacy, who had been conducting active shooter training in high school and elementary schools for several years.

“It’s good to see people getting out in front of issues like these,” Lacy comments. “We just try to give them options. Each active shooter scenario is different – It’s not the same procedure every time. So we just try to show people what they can do to protect themselves.”

For an office environment like Ontario Systems – with a sprawling interior full of cubicles that could easily double as an indoor paintball arena – learning those options was especially important to give employees a bit of extra peace of mind.

“Many of us don’t have the experience with firearms to know what a gunshot actually sounds like,” Wright explains. “So that was the first step: Captain Cox fired off a blank round from a rifle in the break room where the presentation was held, and another from a different part of the building so we could hear what it would sound like if we weren’t in the same area.”

Lacy explains that the most important step to take in mitigating the risk of an attack is for employees to know their work environment, and have a quick exit route in mind in case of emergency. He says employees should know routes to at least two exits, but if the shooter were to come between them and a point of egress, they should seek secure shelter within the building.

Armed with that new knowledge, Lacy and Stanley placed several of the approximately 75 Ontario Systems volunteers present at the meeting around the building, assigning them the role of deceased or injured employees. The rest went to their desks, and Cox entered the building from a random location, playing the role of a shooter after firing blank rounds into the air. Employees were instructed to either run or hide, but not to fight for the purposes of the simulation, while officers from the Sheriff’s Department, the Muncie Police and Ball State acted as responding officers to neutralize the threat.

“This was truly a first-of-its-kind exercise between city officials and a private, prominent company in our community,” Wright adds. “It’s not often you see a business going to those kind of lengths to ensure the safety of its employees. It was a really eye-opening, cool experience.”

“I’m extremely proud of Ontario Systems for reaching out to me for this invaluable training,” added Stewart. “It is a priority of mine to build partnerships and improve our relationships with the community we serve, not only in our neighborhoods, but also with the business community. When existing business have a partnership with the Muncie Police Department it improves everyone’s quality of life.  I’m sure new businesses that are looking to come to our community would see this partnership with Ontario Systems as another reason to locate to Muncie.”

“I also want to thank our team of officers that provided this training for Ontario Systems. Muncie is blessed to have such great men and women serving as police officers. I’m very proud of each and everyone of them.”

But even with good training, Lacy is quick to point out that the best tactic to avoid tragedy is prevention. He cites several statistics from the Department of Homeland security showing indicators that include unexplained increases in absenteeism, depression/withdrawal, and resistance and overreaction to changes in policy and procedure often correlate with eventual shooters.

“In 31 percent of cases, concerning behaviors were reported by associates,” he comments. “Knowing your colleagues, and noticing changes in personality, disciplinary problems, and threats is most important. Only 13 percent of shooters make a direct threat to a target before making the attempt.”

“Caring for employees, like Ontario Systems obviously does, is more surefire way to keep workplace shootings at bay.”