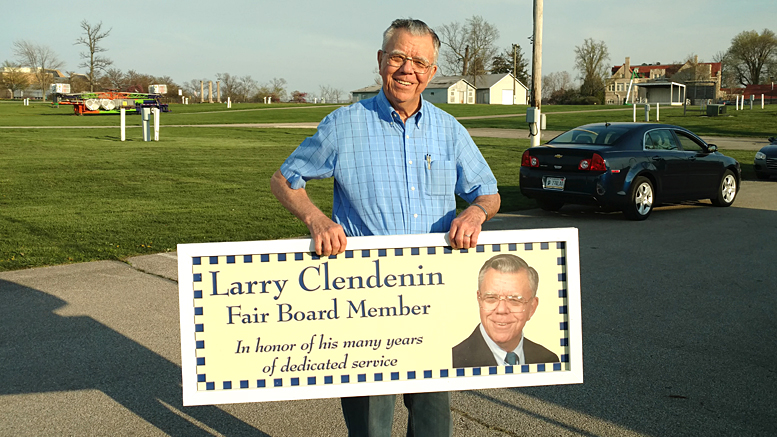 Larry Clendenin was recently honored for his service to the Delaware County Fair. Photo by: Mark DiFabio

In 1979 when Larry Clendenin first became a member of the Delaware County Fair board, the buildings on the fairgrounds were not all numbered. In the years since, they have been identified by numbers. The building directly across from the Dinner Bell restaurant has always been close to Clendenin’s heart, as it was the home for the sheep. Clendenin’s children showed sheep during their years in 4-H. Larry was also past executive director of the Indiana Sheep Breeders association.

That building is even more special now to Clendenin, as it bears now his name. The fair board recognized Clendenin’s many years of service to the board by naming only the second building on the fairgrounds in his honor.

“This board is made up of hard working volunteers that spend much of their time here,” said
Mark Di Fabio, board president.  “Larry’s passion, love, commitment and dedication is truly an asset we are fortunate to have. The entire fairgrounds is a better place because of people like Larry.”

Clendenin was presented with the honor during a recent board meeting and humbly said, “Someone made a mistake!” He also noted that he was honored that his building is next to the John Wright Pavilion, remembering that John was his ag teacher in school.

Clendenin, a former state trooper, recalls he used to take his vacations by coming to the fairgrounds and doing what he could to make it a better place. Larry has been involved in just about everything for the fair, including supervising the grounds crew, organizing the food vendors, and managing the merchants in Heartland Hall.

The fair board is thankful for the third that Clendenin represents.