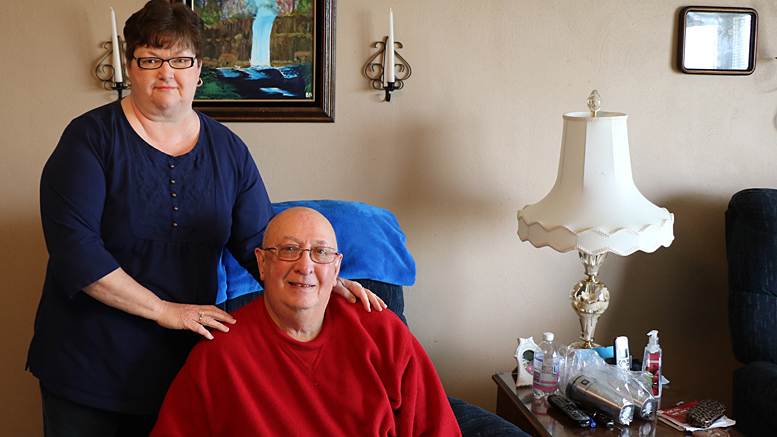 Those are the words that Betty Retherford saw on a billboard while traveling to Muncie in late August of 2015. She instantly thought of her husband, Bill Retherford, and decided to register him for a scan at Indiana University Health Ball Memorial Hospital.

“As an RN, I knew the combination of Bill’s COPD and smoking history put him at a greater risk,” said Betty. “And, $49 was worth the peace of mind.”

Bill met all of the criteria required to receive the scan. He smoked for more than 30 years, from the time he was a 20-year-old draftee for the Vietnam War until 2005 when he realized it was finally time to quit after becoming a grandpa.

Just days after celebrating his 66th birthday, which was his father’s age when he lost his battle with lung cancer, Bill had his initial lung scan. Based on the results of the scan, additional tests confirmed the diagnosis, Stage I Lung Cancer.

“It was a big relief that we caught it early, because I only had to receive a few treatments of radiation versus 35,” said Bill. “I’m just so thankful that my wife registered me when she did.”

When asked what he would say to those who still smoke, he replied “It’s time to quit, believe me. It does you no good and even hurts those around you. The lung scan was the best $49 I’ve spent in my entire life.”

Bill was just one of more than 200 people to have a $49 Lung Scan at IU Health Ball Memorial Hospital in 2015. Of those scans, four patients were diagnosed with lung cancer. If any of your loved ones are heavy smokers and over 50 years old, encourage them to find out their risk of cancer. A simple lung scan could save their lives. Early detection is key. And if they are diagnosed, the IU Health Ball Memorial Cancer Center offers the most innovative treatment options and support.