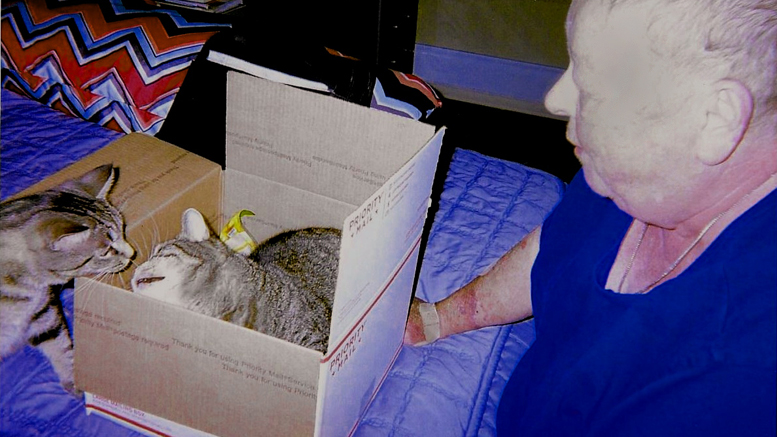 Former ARF residents have the run of the senior living facility

Resident Linda Jones didn’t even know she liked cats, until one “picked me,” she said.

The cat was a stray that stayed around Jones’ residence, and then was replaced by another. “God brought the cat to my doorstep, when I didn’t know I needed one.”

When Jones, who has diabetes and lymphedema, moved into the Lynd House, 2410 E McGalliard Road, she was cat-less. But, she had pictures of her former life with cats, and cat stories to tell.

She talked Jones into going to ARF to see if she could find a “love” match, with the cautionary warning from Jones that the cat had to pick her, and pick her it did. Angela Sexton, manager of ARF’s Catty Shack, said she had another black and gray tabby, and that cat snuggled Jones. So it was settled.

Jones had two roommates, Toby and Tabby, with one moving into her bathroom to sleep in the sink and the other sleeping in Jones’ closet.

Toby and Tabby have a sweet setup.

Jones lives at the end of the hall, in a corner which she has set up for the two cats, complete with a feeding station on a platform with steps on one side of her door, and a litter box on the other side, shielded by a screen that Jones built to conceal its purpose.
Kitty-corner from Jones’ front door is a small cat tree, but the pièce de résistance is a ceiling-high cat tree that was the cats’ Christmas present. It sits in the corner of Jones’ front room between two windows where the cats can watch birds.

Sexton had not seen the cats since they left ARF, and she was pleased during a recent visit.

“It was wonderful to see the cats that we love settled into their forever home! I love seeing and hearing how cats can change and help someone’s life,” said Sexton. “I am grateful that Linda and the Lynd Place gave them a chance to have their very own forever home, we need more people like them!”

Anderson says the cats live at the pet-friendly Lynd House, and have joined eight to 10 pets already in residence. They had tried Lynd resident dogs, but the dogs did not get along, so the combination of Jones and cats seemed like a good option. The cats moved in in mid-summer and made themselves at home.

“They go visiting,’ said Jones, but they come home to eat, sleep and roam Jones’ apartment. Anderson said the additional of animals to the residence is helpful to the residents’ quality of life.

Our residents have lost everything, their homes, their independence, their families, she said of those who live at the Lynd House. Animals make their lives easier, Anderson said. When the time comes for Anderson to go into a facility “kicking and screaming,” she says they will have to pry her pet out of her hands, said Anderson.

Meanwhile back in Jones’ apartment, Jones leaned from her motorized wheel chair to kiss a cat resting on the back of her recliner, while the other cat climbed the apartment’s cat tree settling on the top platform to take a nap.

They did seem right at home.

Founded in 1998 by animal activist Terri Panszi, The Animal Rescue Fund (ARF), Muncie, is a private non-profit, no kill-shelter that provides housing, medical care and rehoming to abused, neglected and unwanted animals. Through education efforts, building public awareness, and community participation, ARF relieves animal suffering by preventing cruelty, abuse, neglect and overpopulation. Since its’ founding, ARF has saved thousands of animals. For more information, or to volunteer or contribute, contact ARF at www.munciearf.com or by calling 765-282-ARFF (2733).

Dee McKinsey is editor and writer at ARF