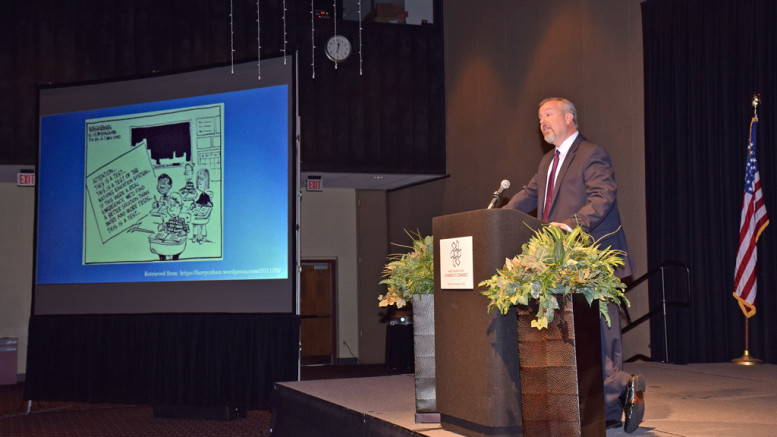 There have been several questions raised regarding the financial stability of the Muncie Community Schools and the creditworthiness of the corporation. One of the best ways to compare the relative fiscal health of an organization is the bond rating. In October, 2015, Dr. Baule shared the bond rating of MCS as determined by the Standard & Poor’s Rating Services. MCS’s underlying rating (based upon its fiscal situation) is BBB+. A second ranking for MCS based upon the State Program Underlying Ranking (SPUR) is AA+; the second rating is based upon the financial situation of the State of Indiana and not primarily of MCS. 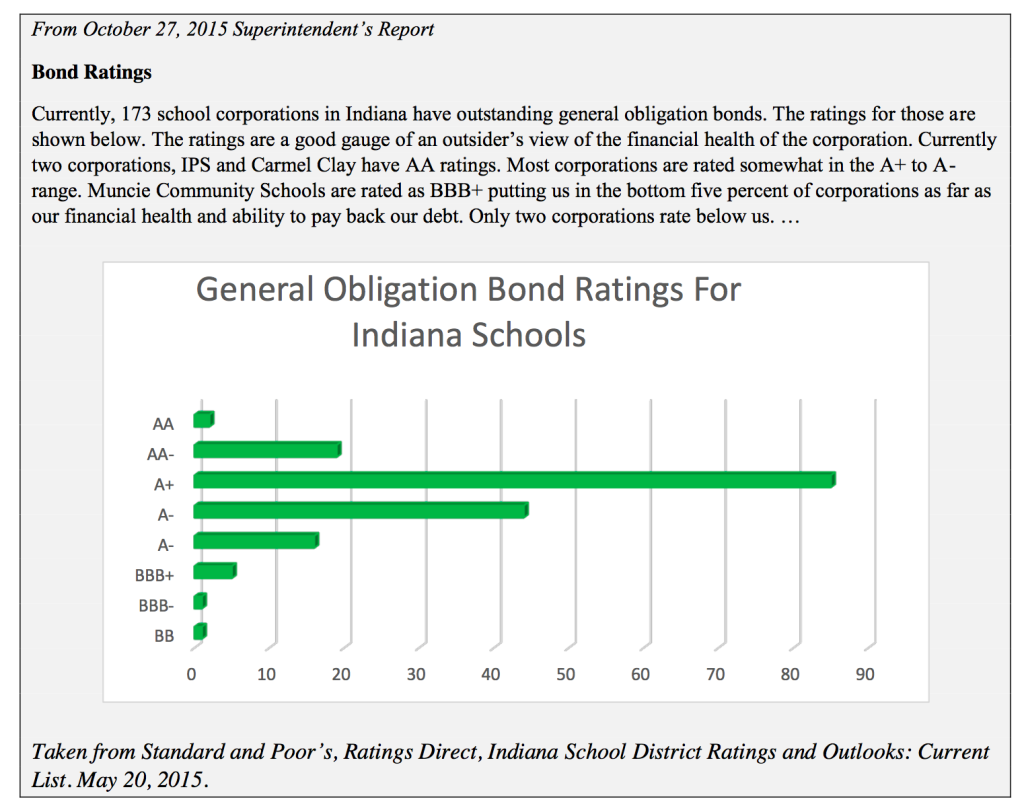 One is correct in pointing out the MCS current Bond Rating can be read as “AA+”. However, the AA+ rating is only half of the equation, as it relates only to MCS’ participation in Indiana’s State Aid Intercept Program. The AA+ rating is referred to as the School’s “State Program Underlying Rating” or
“SPUR”. There are only two categories for the Program Rating in Indiana and it is based on the amount of State Aid the School receives versus its outstanding debt payments. In order to qualify for the AA+ rating, a School must have State Aid equal to at least two times its Maximum Annual Debt Service payment. For Schools with less than two times State Aid coverage, they are assigned a Program Rating of “A”. Therefore, all School’s in Indiana will either have a Program Rating of AA+ or A.

That, by itself, isn’t a good point of comparison between the school corporations, but is a factor of the credit worthiness of the State of Indiana. The State Intercept Program is explained in several places on the Internet, but essentially if a School does not have the funds in their debt service fund to make a scheduled debt payment, the State Treasurer will step in and make the payment and then withhold the same amount from the School’s next General Fund State Aid distribution.

In addition to a Program Rating, Schools receive an “Underlying” Rating, which looks at a School’s overall creditworthiness and financial health. The Underlying Rating is based on the Rating Agency’s assessment of the School’s ability to repay its debt and looks at the School’s financial position, its enrollment, management practices, etc., when determining a suitable rating. Rating categories for an underlying rating range from “AAA” to “D”, with AAA representing the safest investment available in
the market. MCS’ Underlying Rating is currently BBB+. This is a better data point to make comparisons between Indiana school corporations.

According to Matt Schumaker, Vice President for Public Finance of City Securities Corporation, “Investors these days primarily look to an Issuer’s Underlying Rating as a better representation of the Issuer’s ability to repay its debt. The Program Rating serves as an additional safeguard should an entity not be able to pay its debt. For example, if you have two School Districts in Indiana selling Bonds on the same day with a Program Rating of AA+ but School A has an Underlying Rating of AA and School B has an underlying of BBB, School A will receive a much better interest rate because investors put much more faith in the Underlying Rating.”

Thomas Peterson of the TWPeterson Law Office in Indianapolis, who serves as bond counsel for many Indiana districts, confirmed as well that the underlying ranking has become more important since the fiscal crisis of 2008 and underwriters are trying to “go the extra mile” to ensure they have done their due diligence in the underwriting process.

It is easy to understand how someone who isn’t fully conversant with Indiana school financing rules could be confused about what the two rankings mean. At this MuncieJournal link, you may view MCS’s last Rating Report which breaks out the AA+ (SPURS) and BBB+ (Underlying) ratings.

The Muncie Community Schools (MCS) serve approximately 6000 students from Muncie and the surrounding area. MCS provides a range of diverse opportunities for children as well as adult basic education. For more information about MCS events, programs or services, please contact Ana Pichardo, Director of Communications at 765-747-5210 or apichardo@muncie.k12.in.us. Follow MCS on Twitter at @MuncieSchools and like us on Facebook at https://www.facebook.com/MCS1Official.