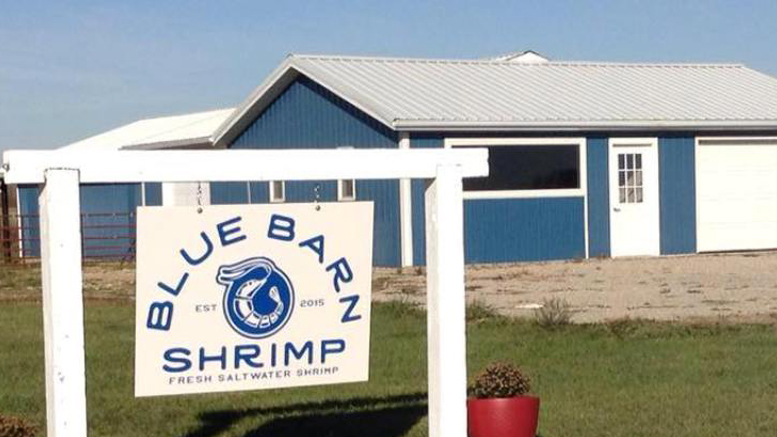 Blue Barn Shrimp, located at 1290 West CR 400 South, Muncie, will have shrimp available year-round for sale. The first harvest came to the farm in September and it takes three months for the shrimp to be the right size. Blue Barn Shrimp aims to sell at jumbo size, or a 20 – 25 shrimp count per pound.

“Customers can visit our retail space, order their shrimp, which we will then retrieve from our pools located in the back of our pole barn,” Jason continues.

According to SeafoodHealthFacts.org, shrimp is the most popular seafood in the United States with almost four pounds per person consumed each year. Much of the popularity for this versatile food is due to its mild, sweet taste that appeals to many who may not be lovers of other varieties of seafood. Unfortunately, an April 2015 shocking study by Consumer Reports on shrimp safety unraveled the scary state of shrimp imported into the United States from counties thousands of miles away like Thailand, India and Indonesia.

Concern for the safety of the seafood they consume and an effort to combat ocean exploitation led Jason and Joanna Hahn of Muncie to begin raising fresh, locally-raised Pacific White Shrimp at their home.

“The majority of shrimp found in American grocery stores are kept “healthy” by the use of antibiotics, which ultimately is very concerning because it hides the true health of the shrimp,” says Jason. “Our promise is to provide 100% antibiotic-free shrimp raised right here in the heart of Indiana.”

The shrimp are raised sustainably, with very little waste created due to a heterotrophic system. This system allows for any waste from the shrimp to be broken down through the use of bacteria which allow the pools to continuously use the same water. Blue Barn Shrimp will also provide tours at a small fee for anyone interested in learning more about the heterotrophic system.

“We like to keep our shrimp happy,” according to Joanna, Jason’s wife and co-owner. “In order to do that, we are constantly checking on the condition of the water and the shrimp through testing. As long as we see consistent growth with the shrimp, we know we are heading in the right direction.”

The Hahn’s, along with Joanna’s parents, David and Lisa Dykhoff, also of Muncie, are excited to have their first harvest coincide with the holiday season. Blue Barn Shrimp opens its doors to the public on Saturday, December 12 at 9 a.m. and will be selling shrimp Tuesday through Saturday. Due to demand, Blue Barn Shrimp suggests calling to inquire about availability before visiting.

For more information regarding their hours, location and more, visit their website at www.BlueBarnShrimp.com.