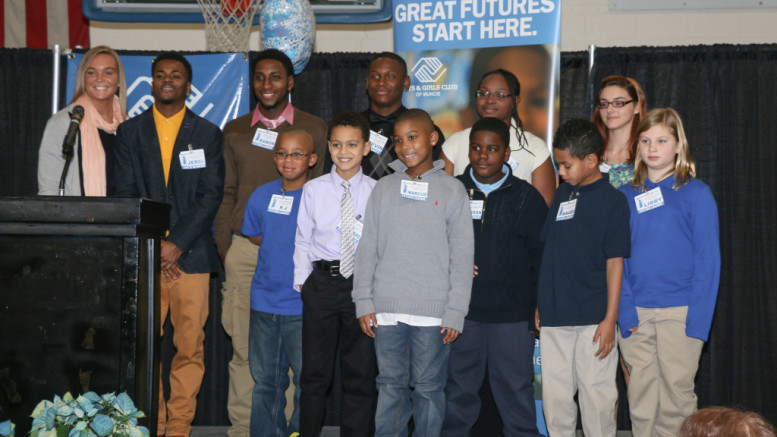 At a recent board meeting of the Boys & Girls Club of Muncie, new board members and officers for 2016 were approved.
(Please see individual board member bios lower in this article.)

“The Boys & Girls Club of Muncie is honored to welcome these new board members. Directors for the Class of 2018 include eleven new board members as a part of the organization’s strategic plan to increase the size of the board.” says Juli Metzger, president of the Board of Directors. “With FOCUS 2020, our five-year strategic plan in place, we believed the time was right to draw on our community’s deep well of experience and enthusiasm to execute the vision and keep pace with the rapidly growing needs of our community and the kids we serve.”

The new officers will be installed during the Great Futures Recognition Luncheon on Tuesday, Dec. 15, 2015 at 11:30 a.m. at the Boys & Girls Club in Muncie. The luncheon is open to the public and will feature recognition of youth, volunteers and supporters in addition to an impact report to the community. Reservations required at http://www.bgcmuncie.org/greatfutures or by calling (765) 282-4461 ext. 103

About the Great Futures Recognition Luncheon

The Boys & Girls Club of Muncie is hosting its second annual Great Futures Luncheon, which will highlight the impact of afterschool programs in Muncie, Ind. The event will host nearly 300 attendees, highlight featured speaker, Jud Fisher, and present their annual awards. Individuals and businesses can register online at bgcmuncie.org/greatfutures or by calling (765) 282-4461 ext. 103. Tickets are $40 each or $300 for a table of eight. Sponsorships are still available at $5,000 for Gold Title Sponsors, $2,500 for Silver Presenting Sponsors, $1,000 for Bronze Supporting Sponsors, and $500 for Table Sponsors. 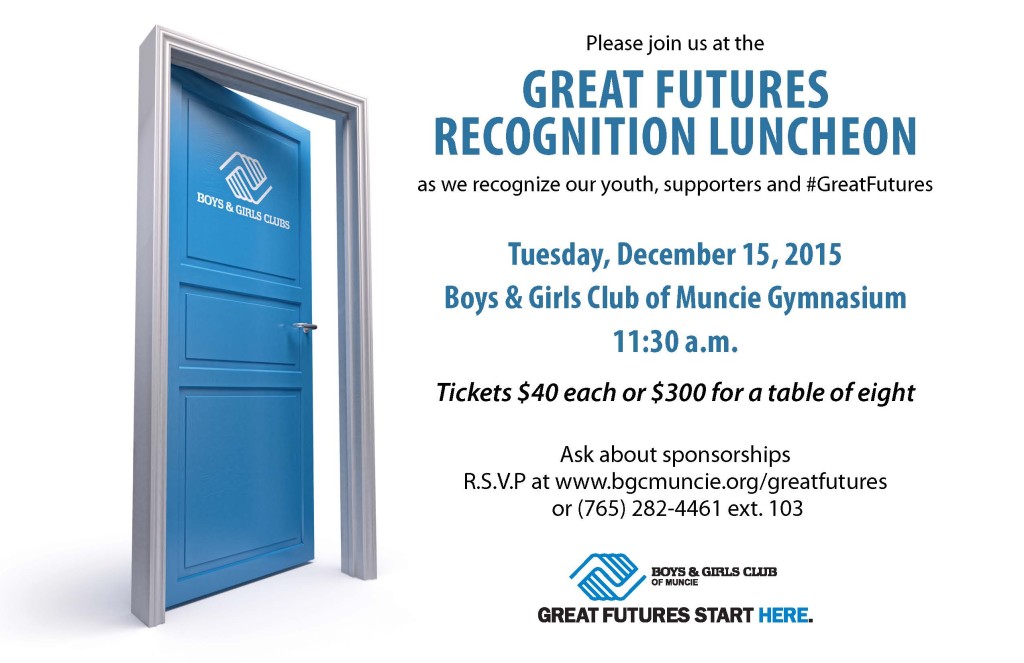 Board Member Bios for Class of 2018

Dr. Charlene Alexander serves as the Provost for Diversity and Director of the Office of Institutional Diversity at Ball State University. Charlene received her B.A. in Psychology from Creighton University, her M.A. in Counseling and Guidance from Creighton and her Ph.D. from the University of Nebraska-Lincoln in Counseling Psychology. Before making the move to Muncie, Charlene worked as the Director of the Stay-In-School Program and later worked as an Assistant Professor at Fordham University in the Bronx, NY. She has won a multitude of awards including the Outstanding Administrator award presented as by Beta Phi Chapter of Alpha Kappa Alpha Sorority, Inc. and the Outstanding Diversity Advocacy Award presented by Ball State University’s Multicultural Center.

Dr. Steve Baule is currently serving as the superintendent of the Muncie Community Schools. In his career as an educator, Baule has been a classroom teacher, a library media specialist, an administrator, an assistant superintendent, and a superintendent for multiple school districts. In 2009, he was identified by eSchool News as one of the top ten Tech Savvy Superintendents. In 2014, Steven was also one of 120 superintendents invited to the White House as a leader in digital learning. Steven received his bachelor’s degree from Loras College in History, his master’s from the University of Northern Iowa in Library and Information Science, a doctorate in Instructional Technology from Northern Illinois University, and finally a doctorate in in Educational Leadership and Supervision from Loyola University Chicago. Dr. Baule also served as an enlisted infantryman and an infantry officer in the Iowa Army National Guard and was honorable discharged as a captain.

Dr. Jeffrey Bird serves as the Chief Operating Officer and Chief Medical Officer at Indiana University Health Ball Memorial Hospital. Dr. Bird assumed his current position from his work in the BMH Family Medicine Residency, where he has been associate director and also served as a member of the hospital’s board of directors and chair of its medical staff. In his new role he works with hospital administration, alongside physicians and advocates for patients. After graduating from DePauw, where he majored in zoology, Bird went on to the Indiana University School of Medicine and completed his residency at Ball Memorial. While raising his kids, he volunteers and coached at the Boys & Girls Club.

Mr. Daniel Body is currently the Chief Operating Officer at Meridian Health Services. His career has been primarily focused in healthcare as an executive as well as an attorney. Before his current position at Meridian Health Services, Mr. Body also served as a Vice President of Behavioral Health at SSM Health, a multi-state behavioral health system and hospital in St. Louis, Co-Founder and Chief Operating Officer of a start-up behavioral health specialty company, and a Legal Counsel affiliated with national law firms with a dedicated healthcare practice group representing a broad range of health care organizations. Mr. Body received his B.A. and M.A. from the University of Missouri and attended Saint Louis University for law school.

Mr. Caleb Churchill is currently the Executive Chef for the Horizon Convention Center. He was also the Executive Chef and Food Production Coordinator for Ball Memorial Hospital, and a cooking instructor at Ivy tech Community College. Prior to that, he served as the Sous Chef for Bon Appetit Management. Mr. Churchill is a former Ball State football player who graduated from Ivy Tech Community College. Caleb is an alum of the Boys & Girls Club and also a former volunteer and employee of the Boys and Girls Club.

Mr. Brandon Coppernoll is the owner of BC Digital Marketing and currently serves as the Interim Director of Digital Marketing & Web for Ball State University. He has recently joined colleagues to launch TechWise Academy to introduce children to coding and technology. Brandon graduated from Ball State University with a B.S. in Computer Science. As a local business owner, Brandon’s engaged in the Muncie community and active in local networking groups, such as East Central Indiana Social Media Group. When he’s not working or networking, you can find him spending time with his wife and three kids while juggling the entrepreneurial bug.

Mrs. WaTasha Griffin is currently President of the Muncie, Indiana Chapter of the Black Expo, Incorporated. She is also the Prevention Program Coordinator for A Better Way Services, Incorporated. Prior to that, WaTasha was the Graystone Transitional Housing Program Manager Certified Family Development Specialist with Open Door Community Services where she worked with the homeless, unemployed, and at-risk populations. Mrs. Griffin graduated from Ivy Tech Community College-East Central while studying Early Childhood Humanities/Humanistic Studies. She later graduated from the University of Phoenix with a degree in Humans Services Management. WaTasha is currently enrolled at Indiana Wesleyan University for a masters in Social Work.

Mr. Mark Sandy is the Director of Intercollegiate Athletics for Ball State University. Sandy joined Ball State in February of 2015 following 10 years as Director of Athletics at Eastern Kentucky University. Under Sandy’s leadership at EKU, the Colonels won 32 Ohio Valley Conference championships and 12 OVC team sportsmanship awards. Eastern Kentucky earned the conference’s Commissioner’s Cup in 2014 and 2012, and the OVC Sportsmanship Award in 2010 and 2009.  Sandy was an all-conference baseball player and captain of the basketball team at Concord College in West Virginia, where he earned a bachelor’s degree in 1974. He went on to earn a master’s of education degree from Lynchburg College and has taken doctoral classes at Virginia and EKU.  He and his wife, Kitty, have two children, Kraig and Madison.

Dr. Neil Schmottlach is recently from an extensive career in philanthropy, wellness initiatives and higher education. Neil most recently served as a Program Officer for the Ball Brothers Foundation after more than 35 years on the faculty at Ball State University. He is a graduate of Ohio State University and earned a master’s degree from the University of Oregon and Ph.D. degree from Florida State University. He served as director of Ball State’s Fisher Institute for Wellness and Gerontology for 14 years and is co-author of The Physical Education Activity Handbook. Neil is also a loving husband with two children.

Mr. Ross Swallow is the Senior Accountant at Whitinger & Company LLC and was recently promoted to Manager with the firm. Ross received his Bachelor’s degree from the University of Findlay with a double major in Financial Accounting and Managerial Accounting with a Minor in Finance. Ross went on to get his Master’s degree in Accounting from Ball State University and earned his CPA designation in 2007. He currently specializes in small business tax and audit service including specialties in the construction and real estate industry. Ross is also involved in community service efforts where he currently serves as Treasurer for Meals on Wheels of Muncie. He is a graduate of The Academy for Community Leadership and is a member of the Indiana CPA Society and the American Institute of Certified Public Accountants.

Mrs. Katie Wray is a Realtor/Broker for Coldwell Banker Lunsford where she partners with Ryan Kramer. Katie has also ventured with Mr. Kramer in starting their own company, KW Rental Management. Prior to real estate Katie was a licensed insurance producer for a combined 7 years, holding a license in both Oregon and Indiana. Katie is originally from Oregon where she earned her associates degree in Journalism & Communications from the University of Oregon before receiving her Bachelor’s Degree and double minor in Human Development from Warner Pacific College. Anderson University brought Katie to Indiana where she obtained her Master’s in Business Administration while coaching as a graduate assistant for the track and cross country teams. It was here that she met her husband, Jason Wray, the head boys track & field coach at Muncie Central High School. Katie is the president of the boys track & field booster club and donates time each season coaching the hurdlers on the team. Katie and Jason reside in Muncie with their 4 children: Brionna, Lily, Luke, and Jace.

About Boys & Girls Club of Muncie
The Boys & Girls Club of Muncie was founded in 1933. Our mission is to inspire and enable all young people, especially those who need us most, to reach their full potential, as productive, caring and responsible citizens. We provide a safe place to learn and grow; ongoing relationships with caring, adult professionals; life-enhancing programs and character development experiences; and hope and opportunity. You can learn more at www.bgcmuncie.org. For more information, please contact the Boys & Girls Club at frontdesk@bgcmuncie.org or (765) 282-4461.