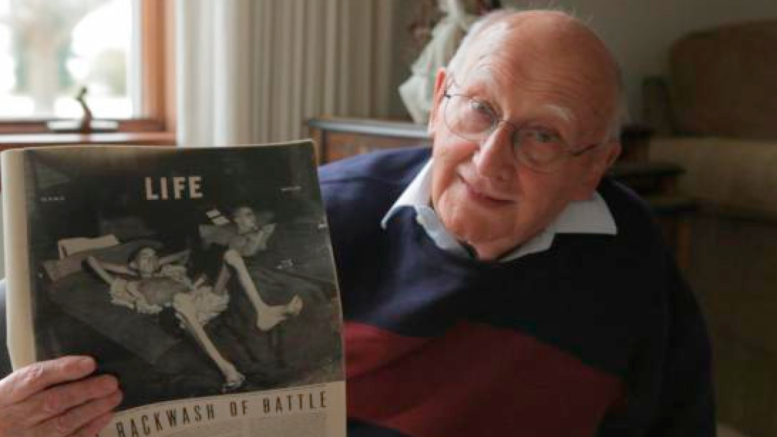 Honor Flight is a heartwarming documentary about four living World War II veterans and a Midwest community coming together to give them the trip of a lifetime. Volunteer’s race against the clock to fly thousands of WWII veterans to Washington, DC to see the memorial constructed for them in 2005, nearly 60 years after the War.

The trips are called “Honor Flights” and for the veterans, who are in their late 80s and early 90s, it’s often the first time they’ve been thanked and the last trip of their lives. The 24-hour journey is full of surprises that deeply move all who are involved. It’s uncommon for World War II veterans to talk about the War, but WWII veteran Joe Demler holds a photo of himself taken after his liberation from a German POW camp in 1945.

The Honor Flight experience brings their stories out. Many veterans say, with the exception of their wedding day and the birth of their children, the trip is the best day of their life. However, 1,000 World War II veterans die every day and getting them on an Honor Flight in time is a constant battle. The film features Orville Lemke, a former plumber and beloved father of nine who fights to hold off terminal cancer so he can make the trip and Julian Plaster, an 89-year-old poet who has survived almost all of his friends and family.

Honor Flight also chronicles the stories of Veterans Joe Demler and Harvey Kurz. They raise money for and promote the Honor Flight program to help fly as many of their fellow veterans as possible. Joe, a soft-spoken retired postmaster, was famously pictured in Life magazine as “The Himan Skeleton” upon his liberation from a German POW camp. Days from death, he weighed just 70 lbs. His comedic sidekick, Harvey, saw the iconic flag go up at the Battle of Iwo Jima, unbeknownst to the shoppers he bags groceries for at the local Pick n’ Save.

As the Honor Flight trip unfolds, Orville, Julian, Joe, Harvey and others share their stories and wisdom. While the Honor Flight program is meant to give something back to these humble heroes, the goodness they embody and their appreciation for life in freedom, transforms the lives of everyone they meet.

Parson Mortuary will be sponsoring Honor Flight the Movie on Thursday, October 8th at 6 P.M. held at the South Side Church of the Nazarene, 3500 W. Fuson Rd. Muncie. There will be no charge for this event and it is open to the public with special recognition to all veterans of the military.

After the film there will be a Q&A session with a board member from Indy Honor Flight hub and you can learn about upcoming flights and how you can get involved!