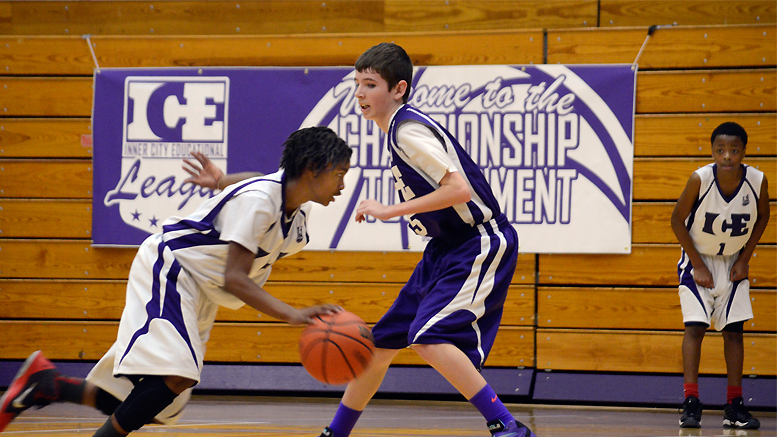 An innovative sports league that leverages students’ love of sports while promoting stellar academics, is expanding in its second season to include middle school girls.

The Inner City Educational (ICE) League is operated by Project Leadership with the Ball Brothers Foundation as the League’s founding partner. The League completed its first baskeball season in March 2015 and is designed to motivate participants to be strong student athletes as they move toward high school and post-secondary educations. The League is composed of 7th- and 8th graders who are drafted to one of four core ICE League member organizations: the Boys & Girls Club of Muncie, Buley Center, Ross Center, and the YMCA.

In the inaugural season, the League had 69 7th– and 8th-grade boys participate, as well as 11 coaches. For the next season, which begins in February 2016 and runs through Tournament Day in early April 2016, a combined 7th– and 8th-grade girls team will be added at each of the four community centers.

“Since day one, we have hoped to expand the ICE League. We are excited to provide the same opportunity to participate in the ICE basketball league for 7th and 8th grade girls in Muncie Community Schools,” said Kaye Harrell, Project Leadership Community Recruiter.

A school-wide initiative will promote the ICE League standards of a minimum GPA of “2.5 to drive 4 4.0 to thrive” at Muncie Central, Southside Middle School, and Northside Middle School. The initiative emphasizing GPAs strives to enhance the culture of high expectations by providing resources to every adult in Muncie Community Schools’ secondary school and identifying and celebrating an ICE Student of the Week.

The ICE League sets the grade point average bar at 2.5 and higher for students who wish to fully participate in the League. A partnership with the Muncie school system and permission by students’ parents allowed the League to monitor student GPA eligibility before the February draft and progress during the playing season. In 2016, the League will be expanded from 6 to 9 weeks.

The impact of the ICE League extends beyond the first season. In the first year of the ICE League, 50% of players increased their quarter play eligibility because of improved GPAs. ICE League Commissioner Tom Lyon said a returning ICE League 8th grade student told him recently, “Coach, last year I could only play two quarters, but want to play all four quarters this year! I am keeping my grades up now!”

Project Leadership is seeking new partners to support the expansion of the ICE League. A Fundraising Golf Outing is planned on Sunday, September 27, 2015 at the Crestview Golf Course to raise money to expand the ICE League in 2016.

For more information about the ICE League or the upcoming golf outing, contact Kaye Harrell at 765-896-8616 or kharrell@projectleadership.org.

Kaye Harrell is with Project Leadership