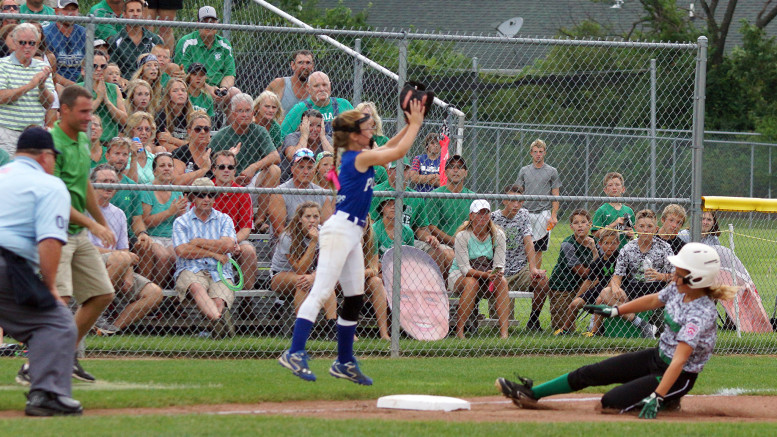 After a big opening round win against Team Nebraska on Saturday in the Little League® Majors (12U) Softball Regional Tournament, Team Indiana (Yorktown JAA) continued pool play against Team Ohio yesterday. The game was suspended after two and a half innings because of rain. The game against Team Ohio will pick up in the bottom of the third and continue on Tuesday.

Before play was suspended, Yorktown jumped out to a 7-0 lead after two and a half complete innings.  The Tigers were paced by catcher Ainsley Phillips, who was 2-2 with 3 RBI’s, and shortstop Lexie Robertson, who was 1-2 with a triple and an RBI. Coming off a big complete game in on Saturday, Savannah Baker remained hot on the mound, allowing only a single hit and striking out five batters after three complete innings on the mound.

Before completing this game on Tuesday, Yorktown continues pool play against Team Kentucky, who is 2-0 in the pool, at 11a on Monday morning. Pool play concludes Tuesday and the top six teams, as determined by their pool play records, advance to the single elimination tournament on Wednesday and Thursday.  At stake is a trip to the Little League Softball World Series in Portland, OR.

For more information on the tournament, visit the Yorktown JAA site, www.yorktownjaa.org, or the official Little League Tourney site, http://www.llbws.org/llbbws/llsbws/central.htm.