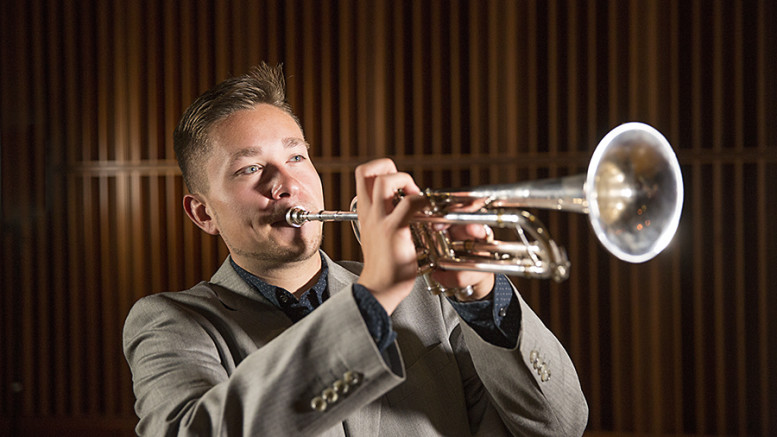 Adam Marchand came to Ball State with modest musical beginnings but left four years later having earned international acclaim for his skills as a jazz trumpeter.

After graduating from Ball State this spring, Marchand, who studied trumpet performance in the School of Music, snagged a third place finish in this year’s International Trumpet Guild Jazz Improvisation Competition, May 26-30 in Columbus, Ohio.

The LaGrange native was one of three musicians from around the world selected for the final round of the competition, receiving a $500 cash prize with the award.

With members in 56 countries, the International Trumpet Guild attracts top talent worldwide. The annual competition is open to performers age 18 to 25. During his successful performance, Marchand played jazz standards “Yes or No” by Wayne Shorter, “Triste” by Antonio Carlos Jobim, “Stormy Weather” by Harold Arlen and “Scotch and Water” by Joe Zawinul.

“Adam represented Ball State extremely well,” said Mark Buselli, director of jazz studies. “The recognition that comes with performing so well on an international stage will open many doors for him. He has a bright future ahead.”

Buselli’s words are affirming to Marchand, who speaks candidly about the naïve musician he was stepping foot on Ball State’s campus four years ago.

“I had a lot to learn back then,” he said, “I just didn’t know how much.” Though he first picked up a trumpet in the fifth grade, Marchand knew little about jazz when he came to college. “For me, discovering the genre here at Ball State was my proving ground.”

Marchand started off studying multiple instruments within his undergraduate performance major. “Trumpet, piano, organ—I wanted to do it all,” he says. But with the guidance of Buselli and Brittany Hendricks, assistant professor of trumpet, Marchand realized he wanted to play jazz and trumpet was his instrument of choice.

While studying jazz greats—Chet Baker among the most influential—Marchand blossomed as a collegiate musician. In addition to his recent guild recognition, he received an honorable mention from Yamaha Corp. for his submission to the 2015 Yamaha Young Artists competition and performed and soloed with the jazz lab ensemble on a 2015 European tour.

“Ball State helped me find exactly what I wanted to do, then helped me take the next steps of exploring ways I could gain a competitive edge as a career musician,” Marchand said. “I still had to put in the hard work, but I wouldn’t be where I am today without the responsive feedback of my professors.”

Ryan Hourigan, director of the School of Music, said Marchand’s dedication and determination are traits the school fosters in students attracted to its new undergraduate degree program, which offers a jazz concentration with an entrepreneurial focus.

“We’ve had a long tradition of exceptional jazz at Ball State for four decades now,” Hourigan said. “But we’ve not had an opportunity for students to major in performance with a jazz focus.

“Our school believes in the new entrepreneurial focus of the university, and our new degree sets us apart from other schools offering more traditional degrees in jazz or commercial music.”

The program stands out by requiring students to take business classes and produce a promotable CD, DVD, website or other piece in tandem with their senior recital.

“These kinds of steps help our students be prepared to become multi-faceted, business-minded, creative musicians,” Hourigan said, “which is key to their 21st century success.”

Marchand knows this well—the time he spent in recording studios at Ball State led to the creation of demos that netted him his numerous awards. The recordings also played a role in landing him a merit-based Artistic Excellence Award at Indiana University, where he is enrolled in the Jacobs School of Music’s jazz studies program, one of the finest in the country.

After earning his master’s degree, Marchand wants to perform professionally.

“I want to hit the road and see more of the world,” he said, “and I know the relationships I’ve built with my colleagues and professors at Ball State will be with me wherever I travel.”