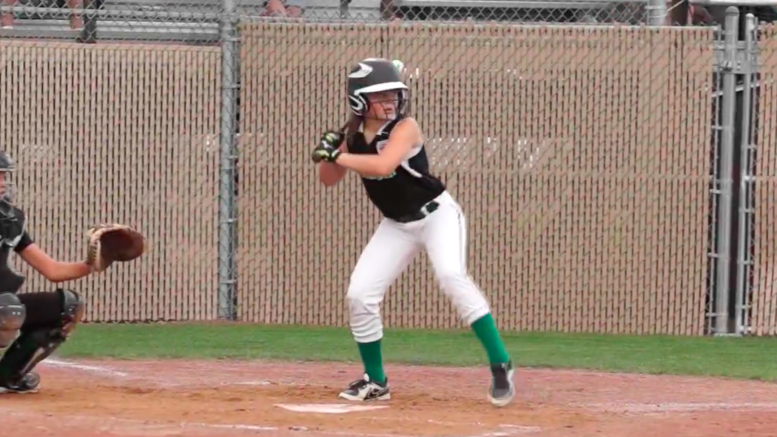 Anna Stanley steps up to the plate and hits a double.

Team Indiana, a/k/a the Yorktown 12U girls tournament softball team, opened play last night at the Central Region Little League tourney against a very strong Nebraska team. At stake in this tournament is a trip to the Little League world series in Portland, OR.

An eight-run explosion in the fifth inning spurred the Yorktown team to a 9-1 win in six innings over Nebraska on Saturday.

They scored in the fifth on an RBI singles by Delaney Boyd and Katelan Godwin, a two-run single by Hannah Avila, and a two-run double by Anna Stanley.

Anna ignited the big inning and racked up two RBIs on two hits in the inning for the Yorktown Jaa LL 12U Softball Tigers.

Yorktown continues pool play on Sunday against another strong team from Ohio.

(Editor’s note: The game scheduled for Sunday evening was rained out. Before completing this game on Tuesday, Yorktown continues pool play against Team Kentucky, who is 2-0 in the pool, at 11a on Monday morning, July 27th.)