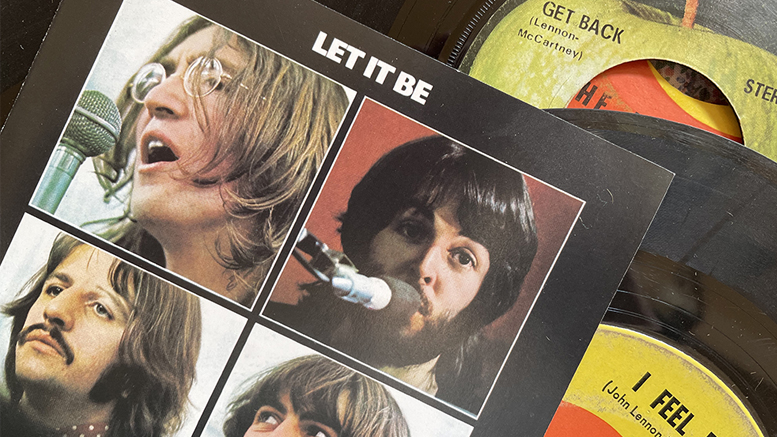 The cover of ‘Let It Be’ takes you back to a remarkable time in Beatles’ history. Photo by Nancy Carlson.

Nancy and I recently watched Get Back, the new Beatles documentary on the Disney Channel, and I won‘t lie to you; there were parts that reminded me of “The Long and Winding Road.”

You know. Long, as in eight hours long.

And winding, as in where’s this headed?

Being a Beatles nut, part of me could hardly believe my reaction. But over the course of the three episodes of Get Back, there are hours of the guys in studios full of amps and snaking wires, exercising a creative process that seemed almost haphazard, a joke. Given the fact the Beatles lived for twenty-two days under the constant scrutiny of film cameras … well, they may have been going a bit daft.

Still, some of this production came as a shock.

Those lyrics that millions of us committed to memory – whether intentionally or through osmosis, having heard these songs for fifty years – had often started as mere improvised filler to round out familiar tunes.

Watching them sing “Dig a Pony,” you realized it could just as easily have come out “Dig Baloney.”

Meanwhile, at any given time, twenty other Beatles employees were hustling around, some twiddling knobs, others taking pictures, others passing out toast, beer and cigarettes. And the Beatles’ wives and girlfriends were sometimes on hand, except for Yoko Ono, who was there all the time, as much a part of the set as the drums and guitars. Usually she was quiet as your proverbial mouse, unless there was a tape recorder directly in front of her. Then that diminutive Japanese lady erupted in screeching that a cat with a kidney infection couldn’t have duplicated.

And there was a bit of drama when, in a flash of petulance, George Harrison up and quit the band, feeling he was playing second fiddle to Paul McCartney and John Lennon. Those guys seemed a bit flummoxed by Harrison’s departure, too, with Lennon jokingly suggesting they replace him with superstar Eric Clapton. In the end, everyone seemed happy when the youngest Beatle returned to the fold.

What was truly amazing was realizing these guys were at the height of their ascension into music history, and none of them was yet thirty years old.

That spat with Harrison notwithstanding, they seemed like four young British blokes who genuinely liked, and even loved, each other. And talented? All three of the guitarists seemed to know some piano and get a kick out of beating up the drum kit, though quiet, unassuming Ringo Starr was the unrivaled drummer and a musician of greater depth than some might presume.

Besides the music around the place, there was laughter aplenty.

The warmest scenes found the guys, especially McCartney, interacting with his wife-to-be Linda Eastman’s sweet little daughter, whom he would adopt. Even then in his twenties, he possessed the homey domesticity of one who could write a sweet song like “When I’m Sixty-Four” for the Sgt. Pepper’s album and not be embarrassed by it.

In the course of the weeks that they prepared to perform Get Back on that rooftop in London, you could almost feel them tightening their playing and some of the lyrics through countless practice sessions, including when Billy Preston showed up. An old friend from their rough-and-tumble days performing in post-war Germany, Preston filled a much needed role playing expert keyboards.

Whatever you thought of things before, when it finally came to the scenes as captured on the roof, the series became an outright joy. John, Paul, George and Ringo were obviously tickled to perform together again. The mood was as upbeat as the music, and not just on that chilly, windy roof. As hundreds milled about the streets below, there were smiles and laughter among folks of all ages enjoying the music.  Sure, a few folks down there were perplexed or offended for some reason, but not many from the look of things.

The aforementioned “Dig a Pony,” “One After 909,” “I’ve Got a Feeling,” and “Two of Us” were among the rooftop performances recorded on the album. They were matched with studio recordings of classics like the album’s namesake, “Let It Be,” and “The Long and Winding Road,” lyrics which McCartney had penned anything but haphazardly.

Then, pretty much as quickly as the show started, it ended, with a growing presence of other folks, including London bobbies, crowding the roof. If you’re like me, you were reveling in the experience when a sobering reminder flashed on screen: What you’d just witnessed was the last time the Beatles played together.

That fact took me aback. The last time? Then the memories began. I remembered the Beatles’ first Ed Sullivan appearance when I was 13 and how it had changed my life. I remembered a year later, my Grandpa and Grandma Smith taking my sister Patty and me to the Outdoor Show in Cleveland, where a performing troupe of four kids in a barbershop quartet had, for comic relief, donned wigs and guitars. The crowd screamed with laughter as the kids played an expert, head-shaking cover of “I Want to Hold Your Hand,” but hearing it live sent a shock of joy up my spine.

After that, I always wondered how long it took those kids to ditch the barbershop harmonies and grab their guitars for real.

Years later, Beatles music having become the soundtrack of our lives, I recalled the same sort of shock when Nancy and I saw McCartney, Linda and his band Wings in Indianapolis. Then how on a trip to England, we’d taken our son and daughter to hallowed ground – Liverpool’s Cavern club – where the Beatles had launched themselves on the world.

The memories were so happy … and  so sad.

How Lennon had been tragically gunned down on a New York City sidewalk in 1980, the ever-faithful Yoko still beside him. I thought, too, of how Harrison had died of cancer in 2001. If Lennon was every bit the victim of his own fame, so was Harrison, who on his death bed had begged a doctor, who was cruelly  pressing the Beatle to autograph a guitar for him, to let him die in peace.

I thought of all that stuff.

Then I realized what the Beatles had left us in Get Back, was nothing short of the epitaph of a remarkable phenomenon so many of us had witnessed and loved, the band’s own way of telling us goodbye.