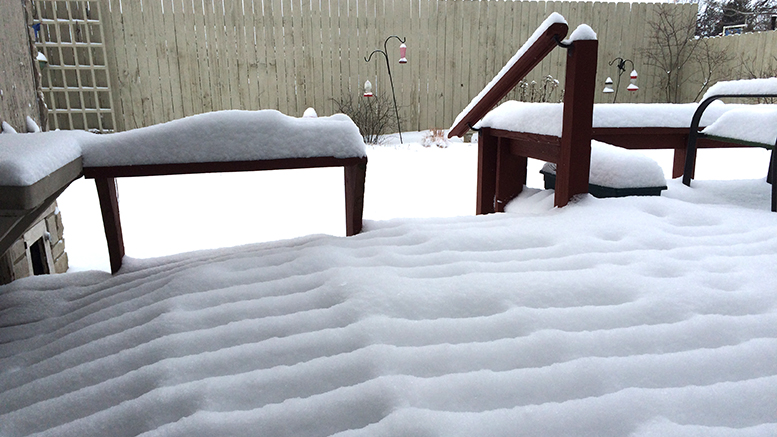 Hoosiers and countless other Americans sat around last week waiting for “Snowmageddon 2021” to hit but, assuming you don’t live in Texas, it was hard to take things too seriously.

After all, we survived The Blizzard of ’78.

That storm’s 43rd anniversary snuck past me a short while back, but for anyone who shivered through it, the blizzard remains a sharply defined memory. Being a young reporter for The Evening Press back then, I had a perfect perch to watch the wintery blast’s drama unfold.

There was, to be sure, an immense amount of snow. It bracketed the roads like frozen walls of whiteness, once plows finally made it through.

It was a rare storm that sent Army National Guard armored personnel carriers clanking along Muncie’s streets. If you didn’t happen to have one of those parked in your garage, or at least a snowmobile, you weren’t going anywhere for a while.

The morning after it hit, a few newspaper types made it to the newsroom only to learn that, for the first time in anyone’s memory, neither The Evening Press or The Muncie Star would publish for a day or two. Crestfallen, we hightailed it over to where Dick Stassen was manning the bar in his otherwise empty tavern, Frosty Miller’s, for some quick emotional pick-me-ups.

Those blizzard days were rife with unforgettable sights, but it was outside Stassen’s place I spotted my first. In the distance, a lonely, hunched figure was literally pulling his way up High Street, door handle by door handle, struggling through the wind and sweeping drifts. It turned out to be retired editor Jack Richman, who had to be every bit of eighty, heading downtown to help us out.

Later some of us rode along with cops on snowmobiles as they delivered medications to folks who needed refills. At one point, though, Chief Dick Heath, a guy I’ve always liked, hollered over his shoulder that there were deliveries they wouldn’t make. It seems a number of folks had been asking police dispatchers to send cops with cigarettes.

But if a natural disaster like The Blizzard of ‘78 could bring out the ridiculous in people, it could also bring out the cruelty.

Several days after the storm hit, things were still largely at a standstill. It didn’t matter, therefore, that outside the tiny room I rented near the Madison Street McDonald’s, two snow mounds marked the locations of my rusty Buick and my beloved BMW motorcycle. So finding myself low on groceries, I bundled up like Nanook of the North and navigated Muncie’s frozen tundra to the old Payless grocery on West Jackson Street. With little left on the shelves, I bought what I could and prepared to hike homeward.

And then I remembered … beer!

Walking that aisle, it was shocking to find nothing but a few six-packs of Billy Beer, the infamously inadequate swill named after President Jimmy Carter’s lackluster brother. But with no other choice, I paid for my stuff, fought back through the snowdrifts and set good old Billy outside on the porch, where he would cool faster than in my tiny fridge.

Fifteen minutes later, needing to slake my thirst after that snowy odyssey, I stepped onto the porch to retrieve my beer.

Some SOB had stolen it.

While it’s taken me forty years of professional counseling, I can laugh about that now. However, I’m still occasionally haunted by the image of me stumbling around in the snowdrifts, rooting for my six-pack while some heartless jerk watches through the gaps between his blinds, quaffing my suds and laughing his butt off.

Bitter? Nah. But it does explain why I hope there’s a Hell.

Thankfully, there were far more acts of kindness than petty theft. Having set out for his nearby job up in northern Ohio, my own Dad didn’t get home until the following day, being put up for the night by kindly strangers. Such acts weren’t uncommon hereabouts, either.

But while there was much kindness shown to others during the blizzard, I also had that “perfect perch” to observe its darkest side.

The Evening Press newsroom was on the second floor of our offices at High and Jackson streets, with an unobstructed southward view of stately, beautiful High Street United Methodist Church. Attracted by the sudden arrival of a fire truck, a couple of us watched as two or three city firemen and a young civilian walked up the snowy main entrance to the church, where there had been reports of a gas leak.

Blocked from our sight as they neared the door, they unlocked it and sparked the church’s now legendary explosion.

In an instant, the firemen and the civilian were blown off their feet and down the snow-packed steps, rolling nearly to the street. A sheet of fire shot from atop the building, as I recall. Most unbelievable of all, the church’s whole roof seemed to shakily rise slightly, then slowly settle back down into place.

Days later, the sight of heavy pews tossed and uprooted inside the church illustrated the power of that blast.

Equally impressive, though, were the firemen. In the frigid air, they kept their hoses trained on the church for hours from its half-frozen, half-flooded parking lot, preventing the flames from spreading. While later they warmed themselves in shifts inside our building, there was no popping down to Frosty Miller’s tavern for those guys.

Their toughness was something I’ll never forget.

By the way, as we prepared to publish The Evening Press again two days later, a shy, slightly disheveled looking fellow stepped into our newsroom right at deadline. It was the young church janitor who’d mounted the steps with the firemen to open the sanctuary door. Amazingly, he seemed none the worse for wear after being blasted down those steps.

While I can’t remember his name, I do remember he made for a good story.

I’m also probably safe in assuming that young man, who’s now in his sixties or older, hasn’t forgotten The Blizzard of ’78 either.