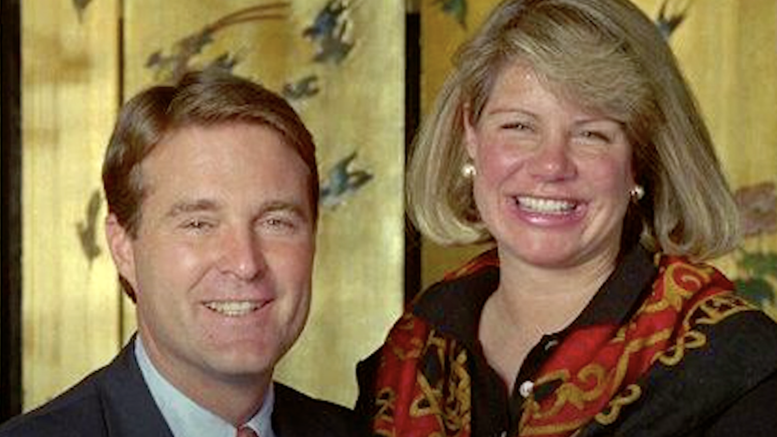 By the Bayh Family—

It is with great sadness that we report the passing of Susan Breshears Bayh after a long and courageous fight against glioblastoma and its complications.  Susan was an incredible person who led a life full of love, courage, and accomplishment.

Susan excelled academically and professionally.  She earned a degree in political science from the University of California at Berkeley and a law degree from the University of Southern California.  She practiced law at two of our nation’s most distinguished law firms, at Eli Lilly (Indiana’s largest employer), and served on the board of directors for several companies in biotechnology, telecommunications, and healthcare.

She served on the Board of Trustees at Butler University and taught as a visiting professor for several years in the fields of business, environmental affairs, and law.  She also served on the Dean’s Council at Indiana University’s Paul H. O’Neill School of Public and Environmental Affairs.  In addition, she worked as Adjusted Professor for her law school alma mater, USC, placing law students in public service internships and providing mentorship.

In 1994, Susan was appointed by President Bill Clinton to the International Joint Commission and served for six years overseeing issues arising between the United States and Canada.

Susan was the 46th First Lady of Indiana and the youngest in 150 years, assuming the role when only 29 years old.  She worked tirelessly to support her husband’s initiatives and established a 401(c)3 charitable organization to combat adult illiteracy in the Hoosier state.  She made countless speeches, gave numerous interviews, and attended innumerable public events as an active First Lady.  Governor Bayh would often say that “Hoosiers voted for Susan’s husband.”

She was beautiful.  She was selected Miss Southern California in 1978, was a princess in the Rose Bowl Parade that year, and was a cheerleader at Cal her senior year in college.

Susan was a model of courage and resilience in the face of overwhelming adversity.  Throughout her 2-year, eight-month battle against cancer, she never once complained or expressed self-pity.  Despite a multitude of hardships, she continued to display her exuberance, happiness, and love for others.  Her fortitude was truly unbelievable and an example for us all.

But above all, Susan was a loving spouse, mother, child, sibling, and friend.  She and her husband, Evan, were happily married for more than 35 years.  They were blessed with twin sons, Beau and Nick, and the couple became the first Governor and First Lady to have children while in office in the last century.  Their sons are both officers in the United States military, have undergraduate degrees from Harvard University, and are currently completing degrees at Harvard Law School and Harvard Business School respectively.  There has never been a more devoted and loving mother or spouse than Susan Bayh.

Susan’s passing leaves the world a darker place, but Heaven has gained a shining star and the firmament will be the brighter for her presence there.  We will love and miss her always.

Susan is survived by her husband, Evan, her sons, Nick and Beau, her parents, Bob and Carol Breshears, and her siblings, Bob Jr., Ann, and Linda, and numerous nieces and nephews.

A memorial service will be held when health conditions allow.  In lieu of flowers, the Bayh family requests that contributions be made to the Bayh Family Scholarship through the Paul H. O’Neill School of Public and Environmental Affairs School at Indiana University. Donations can be made Here