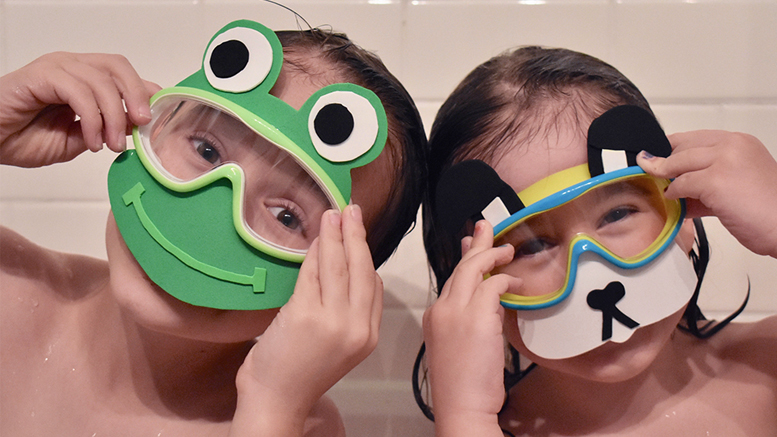 Kai (Left) and Tiana (Right) show off their Froggles and Doggles during bathtime. Photo by Lindsey Markelz

When Lindsey and Andy Markelz pitched their business in the 2018 BIG Idea Pitch Competition, they were very passionate about making this a family event and included their children, Kai (then 4) and Tiana (2), in the ideation and planning process. Kai observed his parents’ excitement for their invention and tried very hard to identify a problem so that he could find a solution.

One day, after a bath, Kai hurried to his mother, eyes wide, “I have a good invention!” he announced. Accustomed by this point to patiently listening to his ideas, Lindsey anticipated the need to let him down easily again, but this time was different. Kai was frustrated during hair washing in the bath because soap and water would end up in his eyes.  He thought a pair of strapless goggles would keep his eyes tear-free. He worked on some sketches, deciding that animal designs would make them fun for kids.

“Kai liked the idea of inventing something and kept trying to identify problems and solutions. I remember how excited he was when he realized that he had identified a real problem and a viable solution because he was always so frustrated during hair washing. Looking back, it’s one of those ideas that makes you ask, ‘Why didn’t I think of that?'” Lindsey shared.

Kai worked with his parents to prepare for the 2020 BIG Idea Pitch, presenting “Froggles.” On the night of the big competition, Kai was calm, joking that his mom was more nervous than he was (she agreed), with his nerves ramping up only after walking into a room of adults and waiting to begin his pitch. After delivering their three-minute pitch, the mother-son team met some of the other local entrepreneurs and waited for the results. As the announcements started with fifth place and going to first, Kai rode the waves of hopefulness and concern as the prize pool narrowed. Ultimately 1st place was announced, and Kai moved with reserved excitement to the front of the room to claim his baseball bat trophy, which is now mounted in his bedroom.

“Of course, we’re excited that Kai came up with this idea and won, but we’re also thankful for the opportunity for him to focus on a goal and to put the hard work into preparing and practicing that ultimately paid off. The life lessons that he will carry forward are invaluable.” Lindsey and Andy Markelz said when asked about Kai’s invention.

Winning 1st place at the Innovation Connector’s BIG Idea Pitch Competition includes a prize package with an abundance of business services. With Innovation Connector partners’ services, Kai and his family can take his idea to the next level by launching an online store with Oggles 1.0 in three kid-friendly designs. Customers can now purchase Froggles, Doggles, and Unicoggles at www.myoggles.myshopify.com