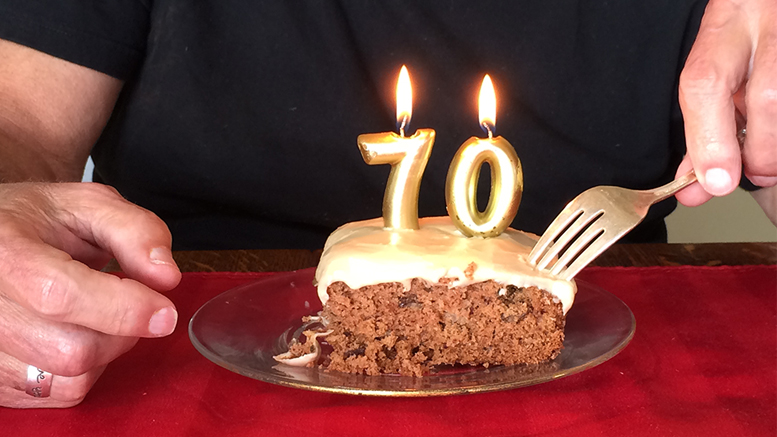 The fact of the matter is, some birthdays seem way more serious than others. Photo by Nancy Carlson

This morning I woke up seventy-years-old.

As ages go, seventy seems a sobering one. If you die at seventy, people who liked you will say, “Well, he lived a good long life.” People who didn’t like you will say, “It’s about time that nitwit bit the big one.”

Either way, your mortality won’t surprise anybody.

Also at seventy, you are acutely aware of time’s passage.

Not that I haven’t already been acutely aware of time’s passage. I remember being seventeen when my college buddy Charlie turned twenty. The fact I had a friend that incredibly ancient left me in a dither. For Charlie, I knew life was all over but the shouting. I felt the same way about myself when I turned twenty, thirty, forty, fifty and sixty, but always perked up the next day with the surprising realization I remained the same old goofball as before.

But seventy? This is getting serious.

I’ve had some big dreams, which time has all but laid to waste.

Take my intention to write The Great American Novel. I must have started it a couple dozen times, only to be distracted by life’s realities, like how beautifully ice-cold Budweiser washes down Hostess Ding-Dongs. Or else I’d be at a critical point on my novel’s second paragraph, with only seven-thousand-nine-hundred-and-ninety-eight more paragraphs to go, then irreversibly lose my train of thought by nearly choking to death on a Twizzler.

Far worse to my way of thinking – unless reincarnation helps sort things out – I’m starting to look like a long shot to ever win the Indy 500.

True, writing The Great American Novel or winning the Indy 500 would be accomplishments marking me as an outstanding individual, which every passing second of my entire life has reassured me I’m not. But plenty of normal-person stuff is slipping through my fingers, too.

I’ll probably never land a six-pound largemouth bass. Therefore, some lonely night, staring moodily into the endless depths of space, I will undoubtedly find myself plaintively calling out, “Why, God? … Why?”

And I’ll have to concede that’s a valid point.

All such bowling victories seem certain to elude me now.

Golf? Having been born with a realistic assessment of my woeful abilities, back in my prime my goal was to suck at golf, but to suck at golf slightly less than some of my buddies sucked at golf. Then I could pull my stool up to the bar in The 19th Hole saloon and obnoxiously lord it over those losers because I golfed a respectable 99 and they shot a miserable 107.

Unfortunately, I was always the guy who shot the miserable 107.

Keep in mind, this was for nine holes.

Still, there’s more than sports that mark the full measure of a man. There are those unseen qualities found insidea man, like courage, enterprise, tenacity and honesty. Each of which, come to think of it, I also stink at.

Or wisdom. My life so far has involved a total lack of it. Way back eleven hours ago when I was a strapping lad of sixty-nine, I thought wisdom would automatically descend on me when I turned seventy. With that hope in mind, I even spent some extra time sprawled in the sack this morning, hopefully awaiting enlightenment.

Twenty minutes later, the only thing descending on me was a dire need to pee.

This seems grossly unfair. Nancy – who is two days shy of just one year older than I am – has been inordinately wise for thirty or forty years now. It became obvious when our son and daughter were kids. They’d always turn to her for answers to questions involving ethics, living with kindness and helping our fellow man.

Me? Maybe once every three years a kid would approach and say, “Dad, can I ask you something?”

“What was the real name of Sam the Sham from that old band the Pharaohs?”

And with the words to “Woolly Bully” suddenly playing in my head, I’d grudgingly answer, “Domingo Samudio,” wondering why I always knew that kind of crap and not something that could have made a real difference in my life, like how to do root canals.

But now I am (gulp) seventy.

Realistically, my chance of mastering root canals is right down there with writing The Great American Novel, winning the Indy 500, landing a six-pound largemouth or beating anybody at golf who isn’t encased in a full-body cast.

On the other hand, they say the good Lord watches out for chubby Lutherans and idiots, so I have managed to muddle through life thus far.

Here’s to muddling through the next seventy years …