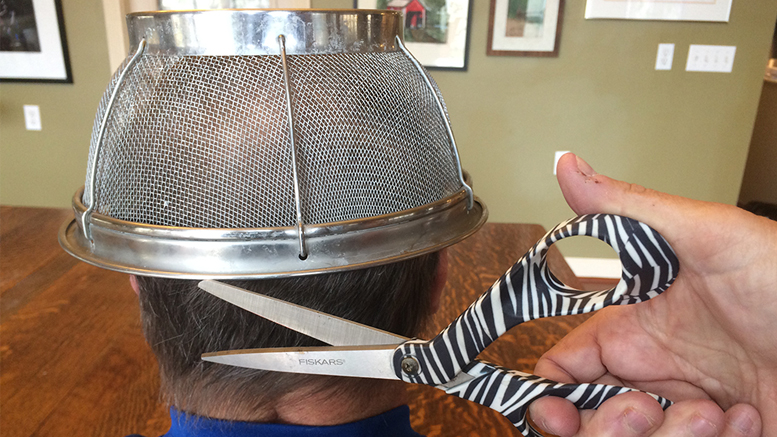 Who knows where pandemic haircuts are headed? Photo by: Nancy Carlson

Lord knows there is much to fear about the COVID-19 pandemic: the collapse of the global economy, ever-mounting casualties, the end of life as we know it…

Plus, I’m starting to sweat my next haircut.

See, I’ve got a feeling my upcoming appointment with my barber-buddy Holly won’t happen, just like the last one didn’t. In fact, I could easily miss a number of haircuts before things get back to normal. Worst case scenario: Extrapolate that out far enough, and there’s a good chance my hair will wind up looking like Albert Einstein’s. Take it even further, and who’s to say it won’t eventually look like the late Wayne Cochran’s. Remember Cochran, that ‘60s rockabilly singer, and his beehive of hair? He had a brick-stiff pompadour you could hide a tennis racket in, with room left over for a quart of Coca-Cola and a tube of Pringles.

Distinguished looking as it was, ahem, I don’t ever want a hairstyle like that. So if worse comes to worst, I’m going to have to ask Nancy to cut my hair, which will expose me to a whole new level of potential haircut trauma.

See, I don’t want to look Amish, either.

Not that – as comedian Jerry Seinfeld used to so infamously joke – there’s anything wrong with that.

I’m an admirer of the Amish, except that as a dog lover, I don’t like the “puppy mills” some run. In all other respects, though, I think they are fine, industrious, peaceful folks who just want to be left alone, except for occasions when we “English” diners patronize their Amish restaurants. This is a good deal for us, of course. It was a few years back in one such Amish establishment that I ate the single most incredibly delicious piece of pie of my life – a slice of raisin-custard that dropped me to my knees in a culinary come-to-Jesus moment.

That said, though, I have never looked at an Amish guy and bellowed, “Now THAT’S what I call a SNAZZY haircut!”

Well, OK, maybe once. I saw it in a PBS documentary about the Amish titled “Witness,” if I’m not mistaken. It concerned a typical Amish guy named Harrison Ford, who between barn-raisings was moonlighting as a wanted-but-innocent Philadelphia cop being stalked by police assassins. This wonderful documentary shows how he lived a really full life on the farm, milking cows, making whoopee in the hay mow with a beautiful Amish widow, and killing bad guys. In my favorite scene, he beats the crap out of a mouthy punk tormenting a buggy-load of fellow Amish folks with an ice cream cone. You know, your common Amish guy.

Anyhow, this guy Ford had a pretty nice haircut. The other Amish guys?

This is why if you are ever perusing male fashion magazines, you’ll never encounter Gentleman’s Quarterly: Der Amish Issue. Amish guys are way more worried about practical farm matters, like supplying their ladies with enough pork to whip up batches of “pon hoss,” a kind of popular pig soufflé, than they are about snazzy haircuts.

Consequently, when haircut time rolls around, I believe they are most likely to settle for the old “soup bowl” treatment. You know. Step one: Place a soup bowl tightly over victim’s – and by “victim’s,” I mean haircut recipient’s – head. Step two: Cut off any hair poking out from under soup bowl. Step three: Go eat some more pon hoss.

This isn’t to say there is anything intrinsically wrong with a soup-bowl haircut. There isn’t. Even a cool dude like Moe had one back on “The Three Stooges.”  Also, when we were kids, my little sister Patty always ended up with a soup-bowl cut, and it was adorable. However, one thing I have discovered about getting older is that, on my list of desirable haircut traits, “adorable” has taken a backseat to more mature male traits such as “stud-muffinly.”

The thing is, as this coronavirus has made perfectly obvious to anyone who’s paying attention, in so many facets of our lives we aren’t in charge anymore. This seems particularly clear in matters of employment, travel and, lest we forget, personal interaction.

But it’s also true in haircuts.

Of course, nobody absolutely has to settle for a soup-bowl haircut. One could obtain the traditional Mohawk with a minimum of barbering skill. Shaving one’s head is also a viable option. But over the years I’ve kind of gotten used to having something to run a comb through. Besides, losing it all in the middle of a pandemic would possibly be the final indignity, the one that puts me over the edge.

So these mornings at breakfast, I’m beginning to eye our cereal bowls as more than something to pour my Wheaties into. Next week it could wind up on my head. Then again, I might not have to resort to a dinky little cereal bowl, after all.

Pretty sure there’s a colander around here someplace.