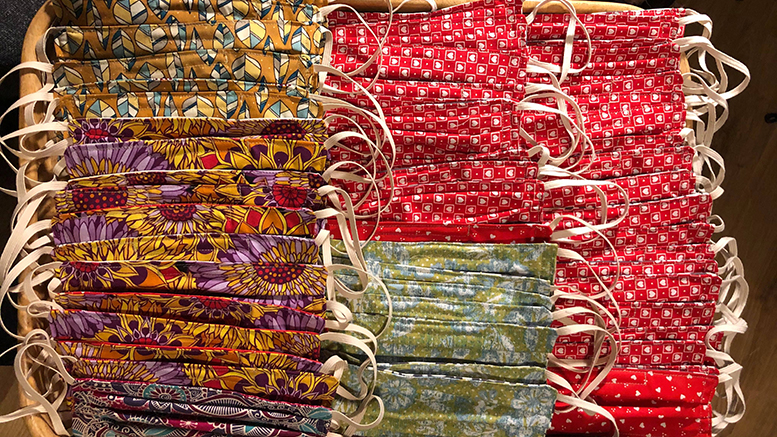 Homemade masks’ true beauty is beneath the surface. Photo by: Cheryl LeBlanc

These days, the longer we cope with the COVID-19 pandemic, the more I find myself thinking about Dunkirk.

No, not the Dunkirk to our northeast that holds the distinction of being part of both Jay and Blackford counties, much as I enjoyed my time spent in that pleasant little burg covering occasional stories over the years.

Instead, I’m thinking about the Dunkirk that is a French fishing port on the English Channel, and how in May of 1940 it became the center of a legendary and heroic evacuation during some of the darkest early days of World War II. What has brought this to mind is a fine new book I just read by popular author Erik Larson. It’s called, “The Splendid and the Vile: A Saga of Churchill, Family and Defiance During the Blitz.”

In books about wartime, you seldom find stories of evacuations couched in terms of heroism and victory, but Dunkirk is the exception.

At a time when Germany’s military juggernaut was crushing the armies of nations such as Poland, Belgium and France, tens of thousands of retreating troops sent to derail the Nazis’ advance found themselves trapped with their backs to the channel. To all appearances, at best they faced capture. At worst, annihilation. And that’s when what Sir Winston Churchill – the fabled British prime minister – called “a miracle of deliverance” happened.

Except, it didn’t just “happen.”

Instead, British sailors – many on ships from His Majesty’s Royal Navy, but many others simply regular English folks who owned or had access to small boats – set sail for Dunkirk to rescue those doomed troops. As Larson’s book points out, between May 26 and June 4, by working together they plucked nearly 340,000 soldiers from Dunkirk’s beaches, carrying them to safety in England. These included almost 200,000 from the British Expeditionary Force and another 140,000 French and Belgian troops, who because they were rescued, lived to fight Hitler’s forces again.

It was stories like that, tales of selflessness in service to a great and noble cause, that fascinated, thrilled and at the same time humbled me as a kid. This was in no small part because my Dad, like millions of other fathers and mothers, had eventually played a personal role in that monumental conflict. As the years passed, there were other historic events that sparked these same feelings in me. Pondering the courageous, thankless service of young Americans from my own generation in Vietnam, regardless of how one felt personally about that war, always left a lump in my throat and an overriding sense of awe in my heart. Years later, the heroic actions of New York City’s firemen, policemen and other public safety workers during and after the 9/11 attacks on the World Trade Center and Pentagon did the same. Through the years there were yet other events, perhaps less noteworthy in hindsight but equally stirring, that inspired the same sense of selfless service in people, too.

Incredibly, shockingly, nothing in modern memory seems quite like this coronavirus pandemic. Here again, I’m just sitting on the sidelines. But the sacrifices that people from doctors and nurses to truck drivers and grocery store cashiers have made in fighting it, and helping maintain our livelihoods, remains nothing less than awe-inspiring. No, dying from an invisible virus while trying to save someone else’s life lacks the noise and riveting drama of being strafed on a crowded beach by a German pilot flying a Messerschmitt 109.

Still, by any viable measure, the sacrifice is the same.

The ultimate heroes are just as dead.

But that very sacrifice has been made countless times since this pandemic has befallen us. Meanwhile, it has also spurred a sense of service and willingness to help that has grown far beyond the ranks of the people you might expect to be involved. We’ve all been privileged to witness it for weeks now. The efforts of Second Harvest and many others to feed those who have suddenly found themselves without work is a perfect example. But because I’ve witnessed them in action, I remain particularly cognizant of the volunteers – most of them ladies – who, free of charge, continue to tirelessly crank out protective masks now numbering in the thousands. These go to folks from hard-hit nursing homes to all other corners of society, people who are practically begging for them.

Thanks to uninterrupted practice, I suppose, the effort has now taken on the aspects of a well-oiled machine.

Requests come in by phone. Donated fabric shows up. Sometimes even a cash donation shows up. A caller notes a willingness to donate elastic which, being in short supply, is coveted by the seamstresses. Supplied with such raw materials, their sewing machines quickly begin to whir. Finished masks are bundled, labeled and placed in safe containers for pick-up and delivery while new orders come in.  Two groups that I know of doing this are Project Benny: Masks for Muncie and Sew and Serve Muncie. Neither existed six weeks ago, both having been formed in response to the coronavirus. Other groups I’m unfamiliar with contribute to the effort, too. Amazingly, while many of the volunteers know the others’ names from communicating orders and requests through social media, they wouldn’t recognize each other if they passed on the street.

All of which, to me, seems extraordinary.

Watch this dedicated effort at work long enough, and you can’t help but be impressed. You also begin to understand something. In these days of COVID-19, all this may not have the same cachet as being soaked by saltwater while sailing across the choppy English Channel in a small boat to rescue some scared young soldiers.

But eighty years after the evacuation of Dunkirk, the spirit that made that operation such a victory remains alive and well in our own country, including Muncie.