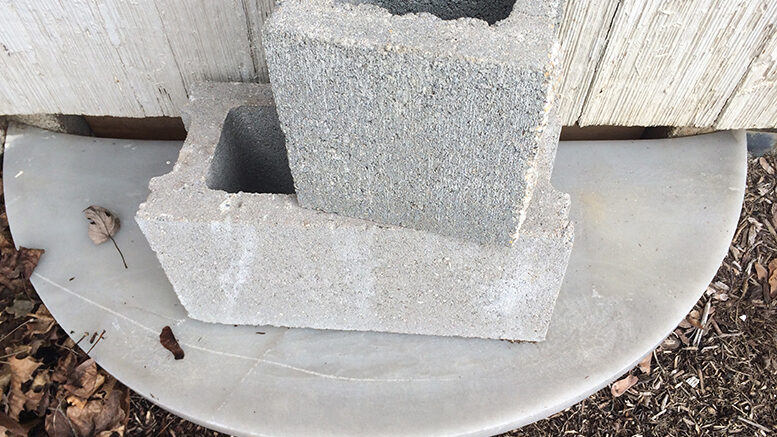 Every time I hear loud, mysterious noises coming from our crawlspace, I am thankful for being a fat guy.

I don’t hear the noises all that often, though.

Nancy, on the other hand, hears loud, mysterious noises coming from our crawlspace all the time, but  in its own way this is even worse for me.

See, having been raised a conservative Baptist, I firmly believe in biblical absolutes, including God’s divinely mandated division of household duties by gender. Given this, as a woman, Nancy’s duties include scrubbing the toilets, re-tarring the driveway, plus replacing missing shingles on the roof during her downtime between cooking excellent meatloaves.

As a guy, it is my divine duty to buy the beer, plus whenever called upon to go down into the crawlspace.

The thing is, heavenly duty or not, I ain’t going down there, not even under the best of circumstances. I have this psychological condition that prevents it, you see. It’s called BAC, which is short for “being a chicken.” I wouldn’t even go down there if J.Lo was waiting for me in her Super Bowl outfit with the keys to my new Mustang, my winning Powerball ticket and a Crave Case packed full of White Castle cheese sliders.

So if all this is true, which it is, I am especially not going down there just because my wife says something is making loud, mysterious noises in the middle of the night. Having seen lots of horror movies and read numerous Stephen King stories, I know that soon as you interfere with things in your crawlspace that go bump in the night, something down there is going to kill you.

As alluded to before, besides being a chicken, here is another reason I am not going down into the crawlspace:  I am way too fat to fit through the hole.

Sure, I’d love to be able to get down there and fulfill one of God’s divinely appointed duties for persons of my gender.

But were I, with gravity’s help and the possible assistance of grease and a girdle, to actually squeeze my fleshy bickets down into the crawlspace, the only way I’d ever get them back out again would be by razing the house. Either that, or passing my corpse back up in pieces.

By this point, particularly cognizant readers may suspect that besides being a fat coward, I have a healthy respect for the supernatural. If so, they’d be correct. Confronted with dank, dark, dismal places, my imagination always gets the better of me. But in fact, there IS something down there in our crawlspace, and maybe even several somethings.

They are, indisputably, critters.

As previously noted, Nancy hears them arguing and wrestling all the time.

In the bid to rid ourselves of these critters, we have called a couple pest-control guys. One fellow set a cage-trap baited with sardines, resulting in the capture of an extremely pissed off cat. He was soon freed, of course. Sitting at my desk, I sometimes observe him through my man-cave windows, running around our neighbor’s yard while staring nervously in our direction.

The second trapper was a nice fellow who pretty much did the same. We never learned if he caught anything, but for a couple weeks afterward the noises seemed to stop.

During his house call, he even sent his soft-spoken assistant – a kid who looked to be six-three and a hundred-twenty-pounds soaking wet – under the house. Even that kid took some scooting and wedging to squirm his way down there, and when his head finally disappeared I breathed a silent, “Good-bye, buddy. Nice knowin’ ya.”

But he was back up again in no time, sound of mind and body, having spotted nothing out-of-the-ordinary.

Later, as we were showing the kid’s boss around our house, Nancy mentioned she had heard gnawing sounds coming from under the bath tub. The boss calmly responded that, yeah, he had known certain critters – squirrels, I think he said – to gain entry into homes by gnawing right through plastic composite bathtubs from below.

Anyway, in checking around our house, neither we nor the experts have found anyplace where such critters could be getting into our crawlspace. This is when home ownership becomes depressing; when you confront the fact that a bunch of dumb squirrels are apparently smarter than you are.

Or they could be dumb raccoons. Dumb possums. Maybe even dumb gophers or, for all I know, dumb beavers.

Whatever they are, in the far recesses of my mind I sometimes think, you’d better enjoy your time in our crawlspace while you can. See, even though I am a chicken, if there is one thing a movie like “The Man Who Shot Liberty Valance” teaches us, it’s that you can only push a fella so far. If these critters keep pushing me far enough past my point of tolerance, rubbing my nose in it often enough, some night in a rage I just might squeeze down there with a flashlight and my trusty .22, then put an end to this outrage.

Oh, who the heck am I kidding? Welcome to the Carlsons’ place, guys! Hope you enjoy your stay!