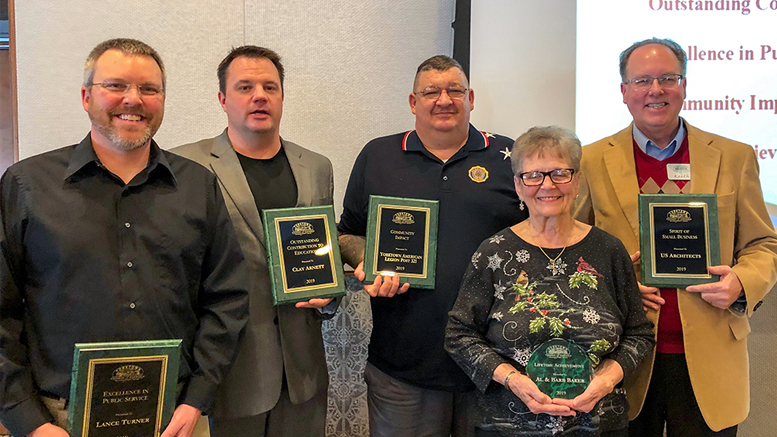 US Architects, the recipient of the Spirit of Small Business award, was recognized for the company’s integral role in the design of the new Town Hall building downtown. Pete Olson, town manager, spoke about the local firm’s involvement with Town Hall’s construction on an episode of Aim Hometown Innovations Podcast last month.

Town Hall opened its doors in November. The building is part of a larger redevelopment initiative for downtown Yorktown, which is intended to spark economic growth and increase foot traffic in the area. To further entice visitors to explore downtown, local business owners started this summer a weekly event—Walkabout Wednesdays—which featured live music by Clay Arnett, a local musician and teacher who was also recognized at the luncheon this week.

Arnett earned the Outstanding Contribution to Education award for his efforts in expanding the high school’s marching band and getting the pep band to participate in local events.

Because of Arnett, Yorktown’s music programs have grown by well over 100 students.

Lance Turner, clerk treasurer, received the Excellence in Public Service award. Since Turner assumed his role, he has been working to correct financial errors made by a previous clerk treasurer.

“Turner has been an incredible asset to the town,” said Olson, who presented Turner with the award at the luncheon. “In just 11 months, he has reconciled financial records that had failed to be reconciled for more than 60 months previously.”

“Our Yorktown American Legion is so amazing because they are constantly striving to recognize our fine veterans and give back to the community,” State Representative Melanie Wright told The American Legion Department of Indiana in an October 2019 article. “The Memorial Park is such a beautiful tribute to our veterans, for if it were not for their tireless service, we would not be able to enjoy the freedoms of our great country.”

The event closed with the presentation of the Lifetime Achievement award, which went to Al and Barb Baker, who have been active in the community for more than 50 years. One of their more notable achievements in the town is the annual Luminary Festival, which Barb has been coordinating for a number of years.

“The festival is the perfect representation of the value the Bakers have brought to our town—it’s a fun, family-friendly evening that brings the entire community together,” Olson said. “The Bakers have played an important role in uniting Yorktown over many years.”

Each of the award recipients were chosen from a pool of nominations. To learn more about Yorktown’s Chamber of Commerce, visit yorktowninchamber.org.