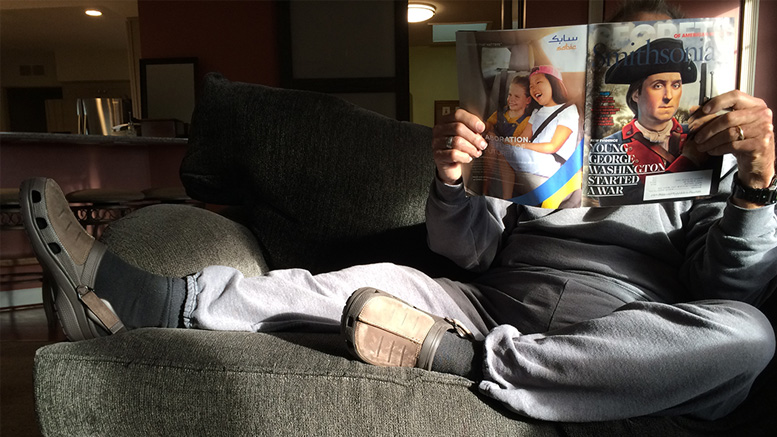 If these were Tactical Pants instead of sweatpants, I’d be karate kicking instead of reading a magazine. Photo by: Nancy Carlson

The other day I saw a Facebook ad for “Special Forces Pants,” also called “Tactical Pants.” Unlike regular pants, these pants had a zipper up front.

Now, I know what you’re thinking. “Hey, my  pants have a zipper up front, too!”

Yeah, but what’s located behind your zipper? Never mind, don’t answer that. The thing is, with Tactical Pants or Special Forces Pants, it may be a secret pocket hiding hand grenades or any number of other weapons to fight your way out of a jam, if only after being captured, you can fool your interrogator into thinking you really gotta tinkle.

About now, I suspect, people who know me are asking themselves, “Wait a minute, Carlson.  What the heck do you know about Special Forces Pants? Weren’t you drummed out of the Cub Scouts in 1959 after getting beaten up by a Brownie?” Well, yeah, but I’ll tell you what I know about Special Forces Pants. For the past three seasons, I know I haven’t missed a single episode of “SEAL Team.”

Admittedly, over those three seasons, I have come to identify certain stark differences between myself and the SEALs, or at least the guys portraying the SEALs on the show. For example, they are tough. I’m a wimp. They are brave. I’m a chicken. When they are in a bar, they attract women just by staring moodily into space, looking back at their day’s work and melancholily pondering the giblets they splattered all over some poor terrorist’s housewife’s brand new curtains.

Me? Before Nancy and I got married, I’d go into bars and stare moodily into space, too, but I was mostly melancholily wondering where I could get a sandwich.

But Tactical Pants are winners, and all you gotta do is buy yourself a pair!

One thing about Tactical Pants is, they are conservatively colored and unadorned with silly decorations. I learned the importance of this back in college at Taylor University about 1970, when some buddies and I schlepped into the GI Café in Matthews to disappoint God by drinking coffee while smoking Marlboros. This being the height of the hippie era, I forgot that at my request, my mother had sewn flowered strips to the cuffs of my jeans to prove  how groovy I was. Now, had I walked into the GI Café wearing Tactical Pants, I’d have been welcomed, and maybe even invited to stick around long enough to eat one of its yummy cow-brain sandwiches. As it was, every townie in the place shot me a hard stare that said, “Lookee here, boys, we got us a Mister Twinkeetoes.”

I might not know a lot about Special Forces, but I’m pretty sure, “Hi! I’m Mister Twinkeetoes!” isn’t something Navy SEALs want their pants to say.

Frankly, I had no idea what gusseted crotches were. If asked, I would have guessed gusseted crotches incorporated protective plates that strategically protected that “special” place where getting kicked might not kill a guy, but frankly, he’d just as soon be dead.  In a typical day on the job, I could imagine SEALs were probably targeted by such kicks way more often than people in any other line of work, with the possible exception of divorce lawyers.

As it turned out, though, gusseted crotches have simply been reinforced with cloth pieces meant to lend greater strength and durability to the fabric. This is especially concentrated on that part of one’s pants that is stretched to the max when karate kicking enemy commandos in the place where they’d just as soon be dead.  As a guy who has frequently ripped out his pants just bending over to tie his shoes, I knew I could use lots more stretchiness down there, too.

Some other good things about Tactical Pants or Special Forces Pants are “better moisture wicking” and their “anti-chafing” properties.

When it comes to wicking, I want all I can get, even though I was disappointed to learn this has nothing to do with Wick’s Sugar Cream Pies. Ditto for “anti-chafing” properties. At age 69, I still have nightmares about the night chafing forced me to stump around my entire shift at McDonald’s holding my legs in the shape of a turkey’s wishbone. Let’s just say while my Micky D’s co-workers were screaming out orders like “Two cheeseburgers, a chocolate shake and fries!” I spent the shift just plain screaming.

Which brings up another selling point for Special Forces Pants or Tactical Pants. The ad noted, they “hold multiple magazines.” As a former newspaperman instead of a SEAL, this set my literature-loving imagination ablaze.

“Why, I could walk around with my Smithsonian magazine in this pocket, my Sport Aviation in that pocket, my New Yorker back here in another pocket, and my Outdoor Indiana in a pocket over there!” I gushed. “Plus there’d be plenty of pockets left over for my copies of actual off-beat magazines to which I’d like to subscribe like Sheep, Drunkard and even PRO, the publication for Portable Restroom Operators.”

Then Nancy interrupted. “You know, dingbat – I mean, darling – I bet they mean the kind of magazines that hold bullets.”