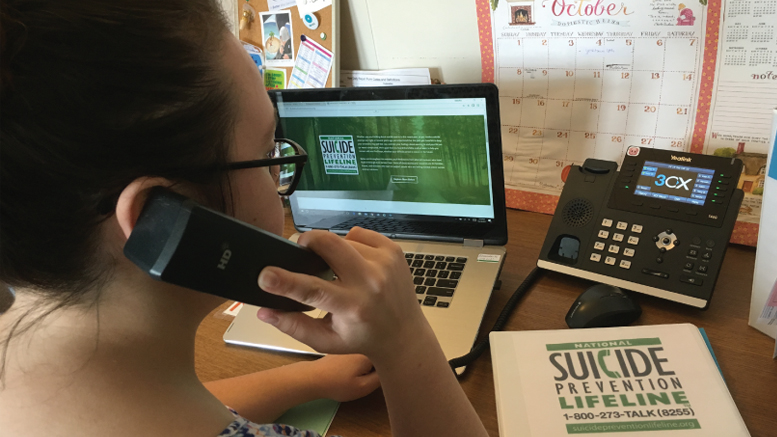 Katie Blankenship assists a caller on the hotline at A Better Way. Photo provided

Muncie, IN—The State of Indiana received a National Suicide Prevention Capacity Building grant of $584,475, and will be sub-granting $122,500 in funds to A Better Way over a two-year period, which began October 1st. The grant will allow A Better Way to hire crisis specialists, recruit and train staff and volunteers, and participate in outreach events. These improvements have increased A Better Way’s capacity to handle suicide prevention calls, making the agency able to grow their service area to twenty counties in East Central and Northeast Indiana.  In September, A Better Way handled 364 calls on the suicide prevention line.

A Better Way has a history of crisis intervention in Delaware County.  However, several years ago they made concerted efforts to improve their ability to assist in suicide prevention.  The shelter for domestic violence, also run by A Better Way, was finding that many of the victims they were serving experienced thoughts of suicide. The ABW staff had a deep desire to help, but felt they lacked the expertise to serve those individuals appropriately.

A solution came when staff were able to attend train-the-trainer in Applied Suicide Intervention Skills Training (ASIST), and then returned to the shelter to train every staff person and volunteer who handled calls.  Upon receipt of this training, the agency began operation of a suicide prevention hotline, in association with The National Suicide Prevention Lifeline, and received accreditation for such services with Contact U.S.A.  Since then, additional staff have become certified to train in safeTALK, and Question Persuade Refer (QPR).

All of this has made us better able to serve victims of domestic violence and sexual assault, and to help suicidal callers.  Andrea Carie, Children’s Case Manager at A Better Way, states that, “Handling those calls, providing emotional support and referrals, and just listening to them, makes you feel like you have really done something of value.  The training also helps you in many other aspects of life, as you interact with people you know and people you don’t know.”

If you would like more information, please contact A Better Way at 747-9107. We can provide suicide prevention presentations to your group, as well as trainings.  If you are in need of assistance regarding thoughts of suicide, please call 800-273-8255.